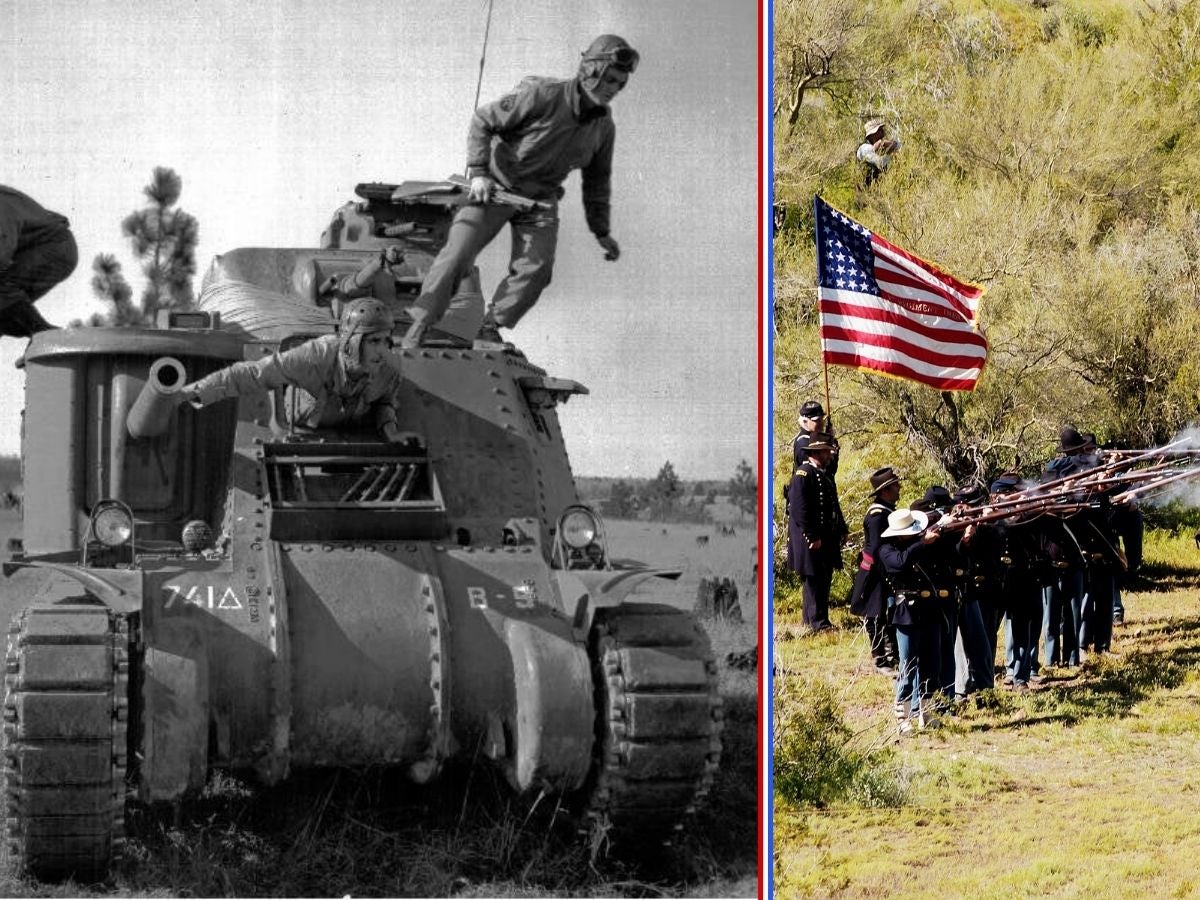 When Europe went to war in 1939, America knew it was only a matter of time before it was dragged into another global conflict. To prepare, the country recruited and drafted hundreds of thousands of men in 1940 and held a series of exercises the next year that helped define how the U.S. would fight the Axis over the next six years.

Before the attack on Pearl Harbor, the U.S. Regular Army consisted of 190,000 poorly equipped soldiers and 200,000 National Guardsmen who had it even worse. That was simply not enough men to fight the war. So Army Chief of Staff Gen. George C. Marshall and President Franklin D. Roosevelt recruited and drafted their way to a 1941 active force of 1.4 million soldiers.

After learning individual and small unit skills, large units were sent to “General Headquarters Maneuvers” in Louisiana and the Carolinas.

It’s in Louisiana that the Army tested new combined arms doctrines established in 1940 and 1941. About 472,000 soldiers participated in the Louisiana training exercises across thousands of square miles of maneuver space.

But many of the Army’s new fighting methods weren’t going to work against the Axis powers, with the Army Air Force retaining control of its planes in Air Support Commands that often ignored requests by ground commanders, for example.

Tanks were also controlled by infantry and cavalry units who often squandered the advantage that the modern machines gave them. Instead of using the tanks to conduct vicious thrusts against enemy formations like Germany had famously done in Poland and France, American commanders used tanks as spearheads for infantry and cavalry assaults.

But while the exercises exposed a lot of what was wrong with Army strategy mere months before Pearl Harbor, it also gave careful and attentive leaders a chance to fix problems with new doctrine and strategies.

First, tank warfare advocates met secretly in a Louisiana high school basement on the final day of the maneuvers in that state. Then-Col. George S. Patton spoke with general officers and tank commanders who agreed on a plan for creating a new Army branch dedicated to developing modern armored strategies.

A member of the group, Brig. Gen. Frank Andrews, took the recommendation to Marshall who agreed and created the brand new “Armored” branch. The infantry and cavalry were ordered to release their tanks to this new branch.

In Africa and Europe, these armored units would prove key to victory on many battlefields. Patton put his tank units at the front of the Third Army for much of the march to Berlin.

The cavalry lost much more than just its tanks. It was in the 1941 maneuvers that Army leaders ordered the end of horse units in the cavalry and ordered them to turn in their animals and move into mechanized units instead.

The air units also went through changes, though markedly fewer than ground commanders asked for. Ground units desperately wanted dive bombers that could conduct operations in close proximity to their own forces, breaking up enemy armor and infantry formations like the Luftwaffe did for Germany.

The Army Air Forces did respond to these requests, finally buying new dive bombers developed by the Navy and practicing how to accurately target ground units. But the AAF still focused on strategic bombing and air interdiction to the detriment of the close air support mission which was a distant third priority.

But the greatest lessons learned in the maneuvers may not have been about doctrine and strategy. Marshall and McNair kept a sharp eye out during the war games for top performers in the officer corps who could be promoted to positions of greater leadership.

A number of young officers were slated for promotions and new commands. Colonels Patton and Dwight D. Eisenhower were scheduled for promotion to brigadier general. Lieutenant Col. Omar Bradley held the temporary rank of brigadier general during the maneuvers and proved his worth in the exercise, allowing him to keep his temporary star. He would hold the temporary rank until Sep. 1943 when it was made permanent.

While the 1941 maneuvers were imperfect and the Army still had many tough lessons to learn in World War II, the identification of top talent and outdated or bad strategies allowed the force to prepare for global conflict without risking thousands of lives, reducing the cost they would pay in blood after war was declared at the end of the year.

The Army wrote a comprehensive history of the Maneuvers which was updated and re-released in 1992. The U.S. Army GHQ Maneuvers of 1941 is available here.