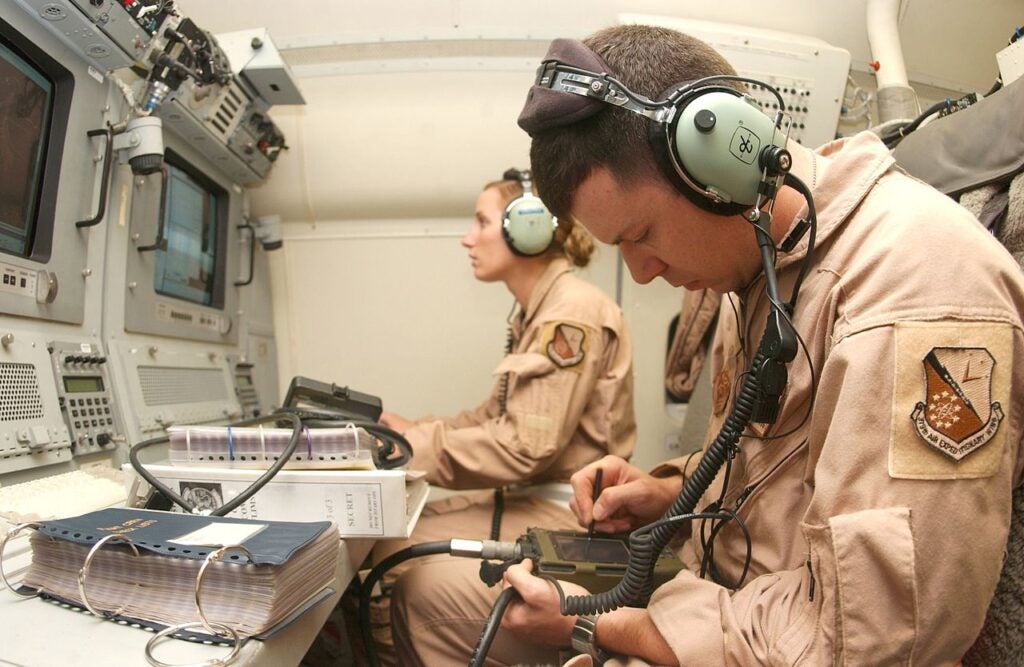 When it comes to the armed forces, the combat arms communities are front and center. Infantry, tanks, fighter planes, bombers and destroyers all work to destroy the enemy and are synonymous with the military. However, accurate and timely intelligence on the battlefield is needed for these combat assets to be effective. One of the most powerful intelligence assets in the Air Force, and perhaps in the U.S. military, is the E-8 Joint Surveillance Target Attack Radar System.

Built by Northrop Grumman and developed from a Boeing 707 jetliner, the E-8 JSTARS was introduced in 1991. It is an airborne battle management aircraft that can track ground vehicles and some aircraft, collect live imagery on the battlefield, and relay intelligence to ground and air theater commanders. The JSTARS is crewed primarily by Air Force and Air National Guard personnel, but also carries specially trained Army personnel as additional flight crew.

Initially two separate Army and Air Force programs, JSTARS became a joint program in 1982. Three years later, the Grumman Aerospace Corporation was awarded a contract for two E-8A development systems. The JSTARS carries specialized radar, communications, operations, and control subsystems to perform its role on the battlefield. Its most prominent system is the 40 ft canoe-shaped radome under the forward fuselage that houses the E-8’s powerful APY-7 radar. Using active electronically scanned array technology, the radar allows the JSTARS to detect, identify, and simultaneously track 600 targets over 152 miles away.

Realtime data collected by JSTARS can be transmitted via a secure jam-resistant surveillance and control data link to Army ground stations and other command and control nodes via satellite. The up-to-date data can then be analyzed, processed into critical intelligence, and used to help commanders make decisions on a fluid and ever-changing battlefield.

In 1991, the two E-8A development aircraft were deployed to the Middle East for Operation Desert Storm. Although they were still in the developmental stage, the aircraft accurately tracked mobile Iraqi forces including tanks and Scud missiles. During the deployment, the JSTARS flew 49 combat sorties, accumulated over 500 combat flight hours and achieved a 100% missions success rate.

Since its introduction, the JSTARS has flown in combat missions like Operations Iraqi Freedom and Enduring Freedom as well as peacekeeping missions like Operation Joint Endeavor. On March 23, 2005, the Air Force took delivery of the 17th and final E-8C JSTARS. One JSTARS was damaged beyond repair by a mechanical mishap in March 2009. The JSTARS fleet is stationed at Robins Air Force Base, Georgia. On October 1, 2019, JSTARS ended its continuous presence in the USCENTCOM area of responsibility. The 18 year deployment is the second longest in Air Force history and culminated in 10,938 sorties and 114,426.6 combat hours.

In 2010, the Air Force began seeking replacements for the E-8 JSTARS. Aircraft considered included the P-8 Poseidon and RQ-4 Global Hawk. However, in 2019, the Air Force announced that it would not move forward with an E-8C replacement. Using phased modernization efforts and capability improvements, JSTARS is expected to remain in operation through 2030. Its ability to collect and transmit detailed information and perform battle management at a standoff distance remains unparalleled in the military’s arsenal.