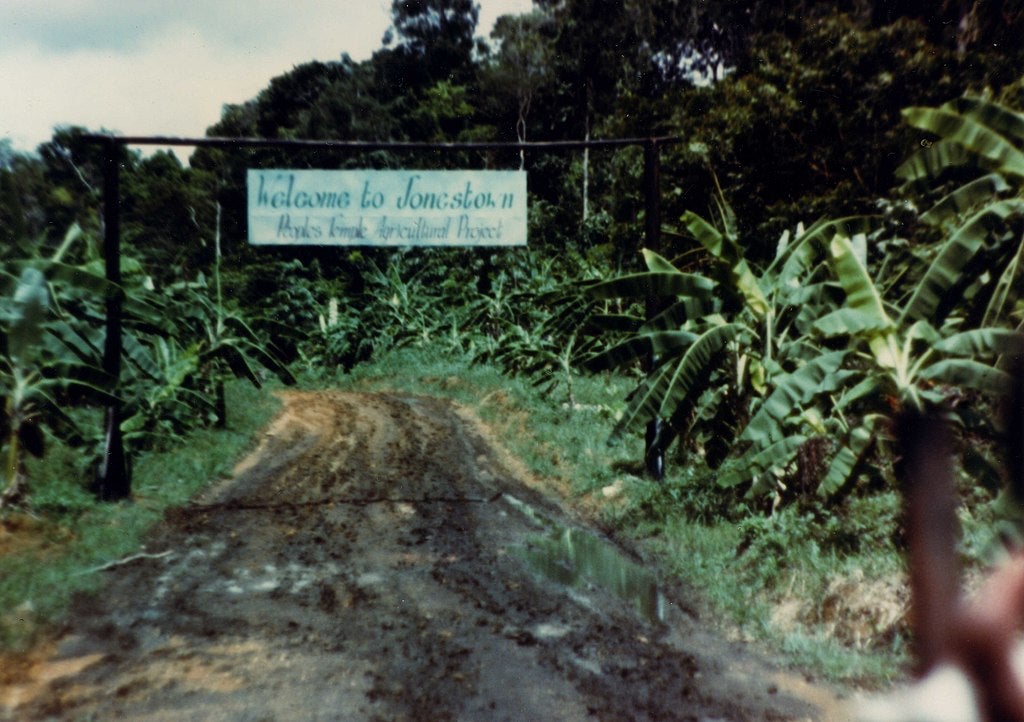 The entrance to Jonestown.

In 1974, the leader of the People’s Temple, a cult centered around the Socialist-Christian beliefs of leader Jim Jones, leased a tract of land in Guyana, the South American country on the Caribbean Sea. Jones set aside nearly 4,000 acres west of the Guyanese capital for his church members to follow him from the United States. By 1977, hundreds had moved to the area, which was then known as Jonestown.

Things started off well enough in the settlement, but after Jones himself migrated there, life became harsh and unsustainable. Reports of mistreatment, torture and imprisonment force Congressman Leo Ryan to fly to Guyana to investigate Jones and the cult encampment. After inspecting the site, Ryan was assassinated by cult members as he attempted to fly home.

Then, in 1978, Jones forced more than 900 members of the People’s Temple to drink poisoned Flavor Aid, including the children of Temple members, at gunpoint. Jones took his own life with a pistol.

In the days that followed, some of the relatives of the Jonestown victims filed a lawsuit against the Central Intelligence Agency, claiming it was the CIA, not Jim Jones, who was practicing mind control in the jungles of Guyana.

The children of the fallen Congressman first sued the CIA, claiming it knew in advance that Jonestown had received shipments of drugs and guns and that violence was an ongoing issue there. These are all factors that might have made Ryan reconsider his visit, had he known. The Ryan family claimed the U.S. State Department knew these things, as did the U.S. Embassy in Guyana.

Their claim was that the CIA was complicit in the settlement as part of its ongoing MKULTRA program, a “massive mind control experiment.” Keeping the program a secret was a factor that superseded any interest in protecting Rep. Ryan’s life. As a result, the Jonestown settlement was filled with CIA operatives. They also claimed the U.S. government was as guilty for Ryan’s death as the Jonestown gunmen were.

By 1981, more lawsuits were filed by survivors of the massacre and family members of victims against then-Secretary of State Cyrus Vance and former CIA director Stanfield Turner. They believed the agency was targeting the cult for their socialist and communist beliefs. The lawsuit alleged that Jones was an agent of the CIA and had been since 1963.

Also charged in the suit were former Attorney General Griffin Bell, Rep. Clement Zablocki, Ambassador to Guyana John R. Burke, Deputy Chief of Missions in Guyana Richard A. Dwyer and other members of the State Department and U.S. Customs Service.

Other sources claimed Jones was a childhood friend of U.S. government official Dan Mitrione, an American torture expert who trained South American governments and rebel groups in torture and interrogation techniques. Mitrione was recruited by the CIA in 1960. Though Mitrione was killed in 1970, many believe he was Jones’ first link to the CIA.

In the end, the Ryan Family’s lawsuit was mysteriously dropped for reasons that are still unknown today. The families and relatives who sued the cult were successful in gathering funds dispersed throughout Central and South America, winning various sums, but no suit against the United States ever went to trial.

The Federal Government also sued the Peoples Temple, to recover the more than $4 million spent on the U.S. military mission to gather the American dead from the Jonestown site and repatriate their remains to the United States.