The highest-ranking African American in the American Expeditionary Force 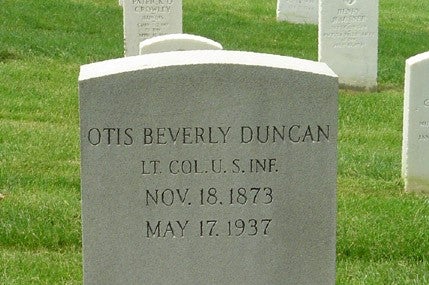 When people think of African Americans serving in WWI, the famous Harlem Hellfighters often come to mind. What may come as a surprise is that the highest-ranking African American in the American Expeditionary Force, Otis Beverly Duncan, was not part of this unit.

Otis Beverly Duncan was born on November 18, 1873 in Springfield, Illinois. His family was a long-established African American family in the city. In fact, his maternal great-grandfather, William Florville, was Abraham Lincoln’s friend and barber. Duncan attended public school and went on to work as the business manager for an African American newspaper in Springfield called the State Capitol. In 1897, he went to work in the Office of the Superintendent of Public Instruction, a precursor to the State Board of Education. Duncan would remain in the department for the rest of his career.

Wishing to expand his public service, Duncan joined the Illinois National Guard. Illinois was unique during the Jim Crow era in that it was one of the few states that organized and paid for the training of an all-black regiment in its National Guard. Duncan joined the unit, the 8th Infantry Regiment, as a Lieutenant. He continued his National Guard service alongside his civilian career and rose through the ranks. By 1904, Duncan had reached the rank of Major. In 1916, the 8th Infantry Regiment was called up for national service during the Pancho Villa Expedition into Mexico. During the campaign, Duncan served on the regimental staff.

When America entered WWI in April 1917, the 8th Infantry was still in national service and was reorganized as the 370th Infantry Regiment. The 370th was one of the few black units to join the AEF and retain most of its all-black command structure. As the unit made preparations to deploy, Duncan was promoted to Lt. Col. and given command of the 3rd Battalion. When the regimental commander, Col. Franklin A. Denison, was relieved of his command and replaced by a white officer, Duncan became the highest-ranking African American in the AEF.

In May, the 370th arrived in France. However, the Army’s racist policies restricted black units from fighting alongside white units on the front. Like the Harlem Hellfighters, the 370th was assigned to the French Army. Duncan and his battalion became part of the French 10th Army in the Argonne Forrest. During the fighting, their German enemies gave them the nickname the “Black Devils” for their ferocity in combat.

Despite being faced with racism from their own army and bitter fighting from their enemy, the men of the 370th succeeded in pushing the German lines back. They were among the first allied troops to cross into occupied Belgium before the war ended. Duncan’s battalion pursued the Germans all the way until the Armistice on November 11.

Duncan was one of 60 officers in the 370th who were awarded the French Croix de Guerre for valor. “We have given our full contributions to this war, that we have fought, bled, and died for the grand and noble principles of the war,” he wrote in a letter home.

On February 17, 1919, the 370th returned home to a welcoming parade in Chicago. Many African Americans from Springfield made the trip north to attend it. When Duncan and the other Springfield natives returned to their hometown, they were greeted by Governor Frank O. Lowden and a celebratory banquet at the Leland Hotel.

For his successful command of the 3rd Battalion during the war, Duncan was promoted to Colonel and given command of the regiment. He was tasked with reorganizing the reformed 8th Infantry back into the Illinois National Guard. He also resumed his civilian career.

Col. Duncan retired from public service in 1929. He died eight years later on May 17, 1937 and was buried at Camp Butler National Cemetery in Springfield. Col. Duncan broke a color barrier at a pivotal moment in American and world history and blazed a trail for colored military leaders in the wars to come.