How Churchill became a writer who also won a war 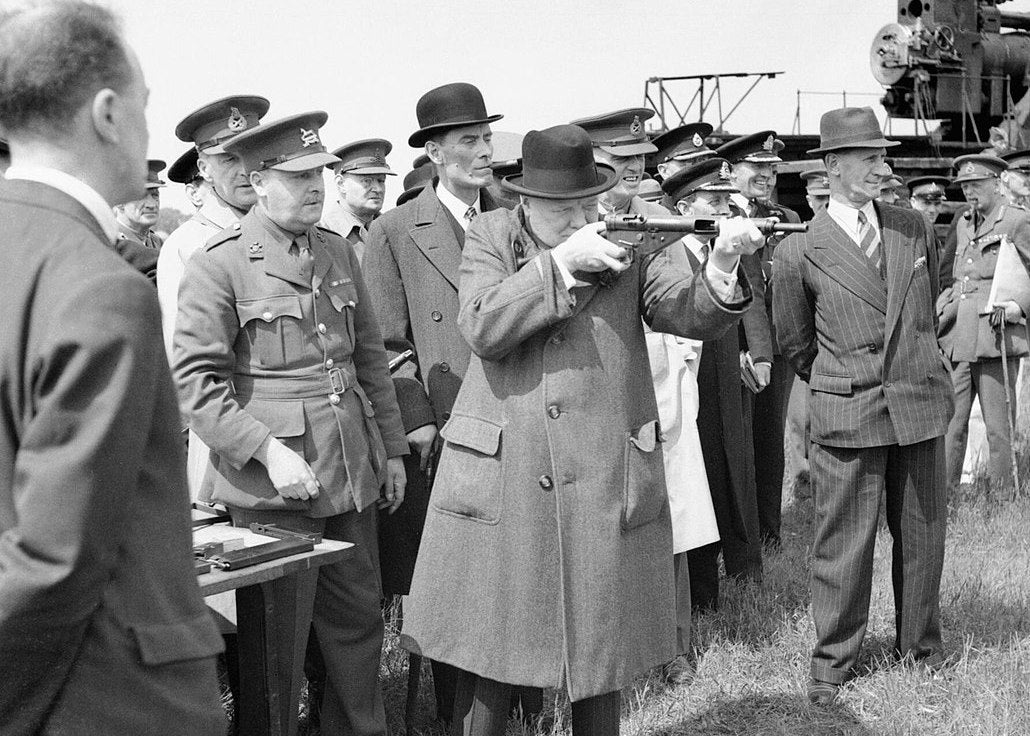 Winston Churchill takes aim with a Sten gun during a visit to the Royal Artillery experimental station at Shoeburyness in Essex, 13 June 1941.

Historical figures like Sir Winston Churchill are written about, analyzed and even lionized. But few figures in history are approachable on a human level because they left few of their own thoughts for us to sift through. Not so with Churchill. Surely the most prolific author in modern history’s political world, he occupied rarified air not only as a war strategist, but also as a writer.

Churchill wrote 43 books in his lifetime. The first was titled The Story of the Malakand Field Force, and was published when the Great Man was 24. It is an account of the beginning of uprising in India. It was during the Boer War that Churchill first saw action, and was almost killed more than once.

His last work, A History of the English-Speaking Peoples, appeared in the late 1950s. Clement Atlee quipped that an alternate title for this masterwork could have been Things in History That Interested Me. In any case, Churchill’s inner thoughts are on display in a variety of works, and none moreso than during the moment he was made for: World War 2.

It is Churchill’s partial wartime memoir, written during the most intense days for Britain, that offers stirring information about the dark days of 1940. Imagine (just try) writing a compelling and thorough account of the war you are presently engaged in! It boggles the mind that his prodigious output, as the war raged, could happen at all. Certainly, great men of history have notes to fall back on when writing memoirs long after the fight. This though was something else altogether: The “Roaring Lion” waxing brilliant with pen and ink at precisely the same moment he is saving civilization from a unique and existential threat.

Blood, Sweat, and Tears (the title taken from his brilliant speech upon becoming prime minister) was published in 1940. It came during the London Blitz, the Fall of France, and the tense action at Dunkirk. It offers remarkable clarity on just how a single individual rallied his own people to oppose a behemoth rolling across Europe unimpeded. One line from this book encapsulates that historical moment: “We shall never cease to strike.”

That tone had been missing from British politics and, if we’re fair, from European politics all through the rise of Hitler. No one else waved a red flag in front of the psychotic Austrian corporal. Churchill was in Germany’s way, and everyone knew it. The Isles would survive the horrifying year of 1940, and would see the threat vanquished. The cigar-chomping, acerbic Churchill took it right to the Nazis, putting into print exactly what he was going to do: “We shall not be content with a defensive war.” He said they would “outlive the menace of tyranny.” Here, he was very prescient.

Long after Hitler blew his brains out in Berlin, Churchill would go on to cap a peerless life by painting, writing and entertaining a never-ending line of admirers. For a man with his own sizable ego, Churchill in Blood, Sweat and Tears paid homage to the real heroes of the conflict: the common soldier that overcame crazy odds at Dunkirk. He wrote of “A memorable resistance” [at Calais]. Their fighting prevented two German armored divisions from reaching Dunkirk. The British Brigadier was given an hour to surrender. He refused and held them off an additional four days!

Churchill dished on his political peers’ decisions in such a moment: Belgium’s King Leopold, at the last minute, inexplicably sent an emissary to the Germans, surrendered his army, and “exposed our whole flank and means of retreat.” The Germans had also put magnetic mines in the Channel. Imagine—870 vessels, including light warships and others, sped across the Channel to pick up the stranded army at Dunkirk. The RAF inflicted losses on the Luftwaffe of four-to-one and 355,000 men rescued. “All of our types—the Hurricane, the Spitfire and the new Defiant—and all our pilots have been vindicated as superior to what they have at present to face.”

He was defiant, certainly, and that grit no doubt held off the Nazis from invasion. Churchill wrote, “We are told that Herr Hitler has a plan for invading the British Isles. This has often been thought of before. When Napoleon lay at Boulogne for a year with his flat-bottomed boats and his Grand Army, he was told by someone, ‘There are bitter weeds in England.’ There are certainly a great many more of them since the British Expeditionary Force returned.”

He had thrown down the gauntlet and history records that the German war machine flinched. But he said a key thing: “Wars are not won by evacuations.” From 1940 on, the British pressed the fight and took it to the Nazis. Their magnificent commander knew he couldn’t win by retreating. Herr Hitler found that out the hardest way possible!