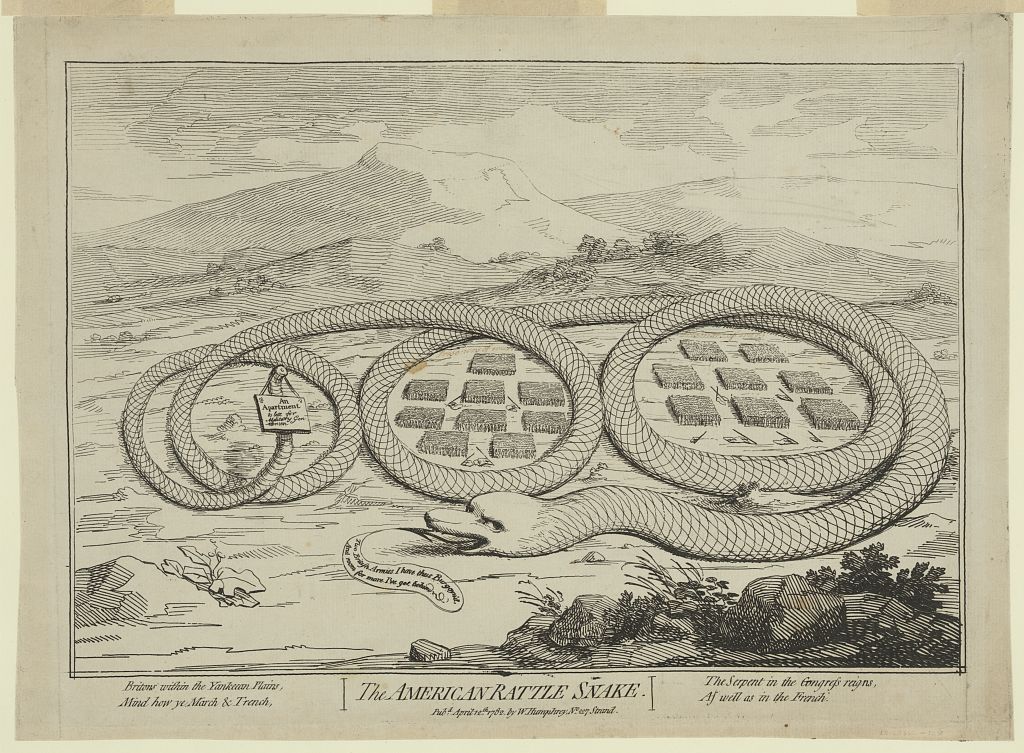 The growing schism between the residents of the colonial government and the British North American colonies reached an explosive conclusion resulting in freedom. Political cartoons provide an insight into the decisions made by politicians and public opinion. During the Revolutionary War, cartoons became an influential way of conveying criticism and discontent. Humor is also a key pillar of free speech which is often the first thing outlawed by tyrants.

Here are the Top 5 political cartoons from the Revolutionary War

1. The Tory’s Day of Judgement

On the Revolutionary Tour, Tory’s Day of Judgment was a favorite of colonials. The Sons of Liberty of New York are depicted in a cartoon hanging a patriot named Tory by the bottoms of his trousers from the sovereignty pole. New York was originally a colony of the Dutch referred to as New Netherland and was conquered by the English force in 1664. After the takeover, the Dutch stayed in New York and allied with Scots, including the Anglican Communion opponents and Presbyterians. This cartoon illustrated the Dutch in the back row, wearing their amusingly portrayed Dutch hats and holding cups with rum.

2. The Patriotic Barber of New York or The Captain in the Studs, 1775

This Revolutionary cartoon was coined in 1717 at an occasion in New York City. According to the great legend, a renowned barber called Jacob Vredenburgh turned down a request to shave Captain John Crozer because he was a military officer. When the realization came to him, the barber had begun working on Crozer’s head, so he kicked Crozer out with a half-shaved head. The barber was only following the caption from a portrait on his wall. The statement forbade captains from roaming in America’s land and encouraged barbers to half-shave them.

The snake drawn by Ben Franklin is popularly referred to as “join or die,” and apparently has other meanings and is utilized in several ways. The drawing delineates a time when the British were conquered in 1781, as demonstrated by the snake surrounding their army. Writings on the snake suggest that the two British forces were defeated and warned the rest of the army to fall into the same traps. It gives them advice to carefully tread and keep watch of how they march and trench. Clearly, the writer believes that evil forces were behind America’s rebellion.

4. The Conference between the Brothers – How to get Rich

From this Revolutionary cartoon, it is clear that anti-war sentiment did not commence from one day to another. Like today, money was crucial and could make the best leaders corrupt in unthinkable ways. For instance, Commander William ad Admiral Richard once gathered to discuss ways they could benefit from the Revolutionary War. The painting illustrates how they were being advised by the devil, encouraging them to make the war last longer as it was the only way they could get richer. Additionally, the painting depicts a helpless farmer growing cabbage is in the background.

The mighty lion fighting off enemies is a representation of England during the Revolutionary War. The cartoon illustrates England’s confidence during the period and how they believed they would defeat of the rebel colonies and enemy nations all at once. Which, it did not.