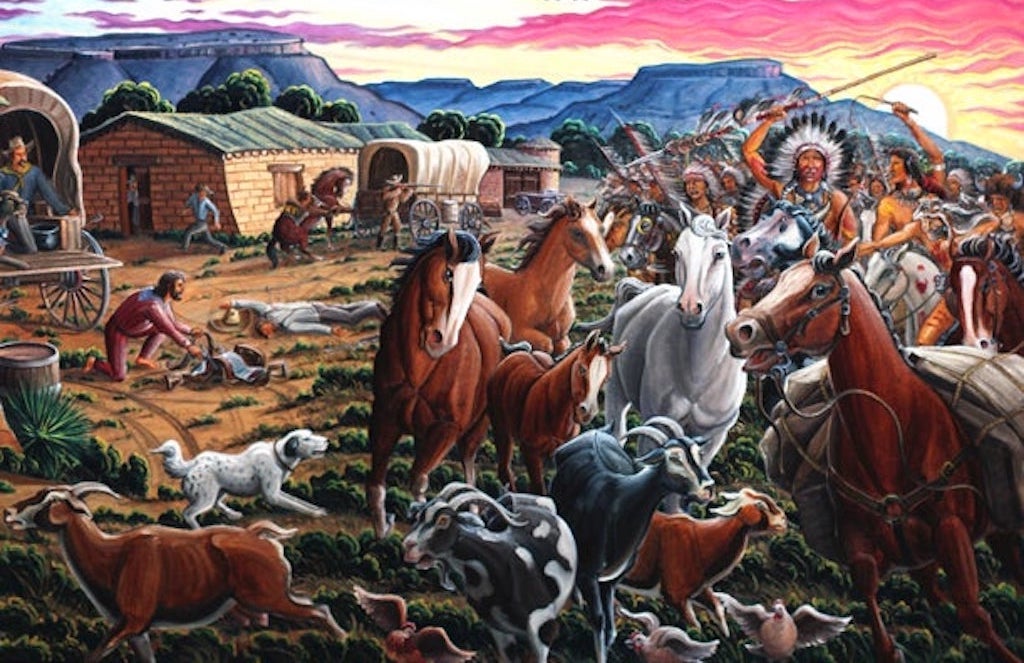 In 1874, the Comanche tribe was fighting for its very survival. Though decades past the height of their power on the Great Plains, the Comanches were not going down without a fight. They were long the dominant tribe on the plains and were known to aggressively resist Mexican or American expansion into Comancheria, their homeland.

The U.S. Army was trying to expel not just the Comanche, but also the Kiowa, Cheyenne and Arapaho nations out of the southern Great Plains, forcing them to resettle inside the Indian Territory, in what is today Oklahoma.

The tribes were in violation of the 1867 Medicine Lodge Treaty which called for them to stop their aggression against settlers moving west in exchange for housing, agricultural training and supplies. For a time, the treaty worked but settlers soon began thinning out Buffalo herds to sell hides, threatening the tribes’ way of life.

Comanches stood up to fight the settlers and the U.S. Government in what would become known as the Red River War. Their leader, Kwihnai Tosabitʉ – Comanche for “White Eagle” – was a Comanche medicine man who preached that a great war between the natives and the white men who were killing the buffalo was unavoidable.

Kwihnai Tosabitʉ claimed that he had ascended to the skies, flew above the clouds and spoke with the Great Spirit. He told his fellow tribesmen the Great Spirit had given him incredible powers that would help revive their once-great people and rid them of the white men forever. He claimed he could cure the sick, raise the dead and control the weather.

Most importantly, he claimed he could stop the white man’s bullets from flying and when he couldn’t, he would make the Comanche warriors immune to gunshots. When he correctly predicted both a drought and astronomical events, the people of his tribe believed he was imbued with the powers he claimed, and they were ready to go to war with the U.S.

An overwhelming number of warriors rallied to this cause, prepared to go to war with the bulletproof powers provided by White Eagle. The Kiowa people rallied alongside their Comanche neighbors and prepared for their own attacks.

Their first attack came in the Texas panhandle, at a 28-man strong settlement called Adobe Walls. The complex was just a group of buildings designed to handle the needs of local buffalo hunters and should have been an easy target for bulletproof Comanche warriors. The tiny outpost was a threat to their existence.

Just before dawn on June 27, 1874, 700 native warriors arrived at Adobe Walls and charged the settlement, believing they were impervious to the white man’s weapons and fighting alongside the Great Spirit in a mission to reclaim their homelands.

Unfortunately, the natives’ surprise raid was spoiled by the collapse of a building’s roof inside the settlement. Earlier in the morning, a large crack erupted from one of the buildings, awakening most of its inhabitants. When they realized it was a roof caving in, many of the men awoke to help. So when the natives arrived to the area, the target white men were awake and somewhat ready to move.

The Comanche nearly won. They rode into the encampment and operated at such close quarters that the buffalo hunters’ rifles were nearly useless. For days they harried the hunters, killing four of them.

As the Comanche surveyed the battlefield, legendary frontiersman Billy Dixon – one of only eight civilians to receive a Medal of Honor – took aim at one of the leaders atop his horse from an estimated 1,500 yards with a buffalo hunting rifle. In an admittedly lucky shot, his target went down. The Comanche left the battlefield that day.

Because of his failed visions and leadership, the medicine man Kwihnai Tosabitʉ, or White Eagle, received a new name from the Comanche people: Isatai’i, or “Coyote Vagina.”