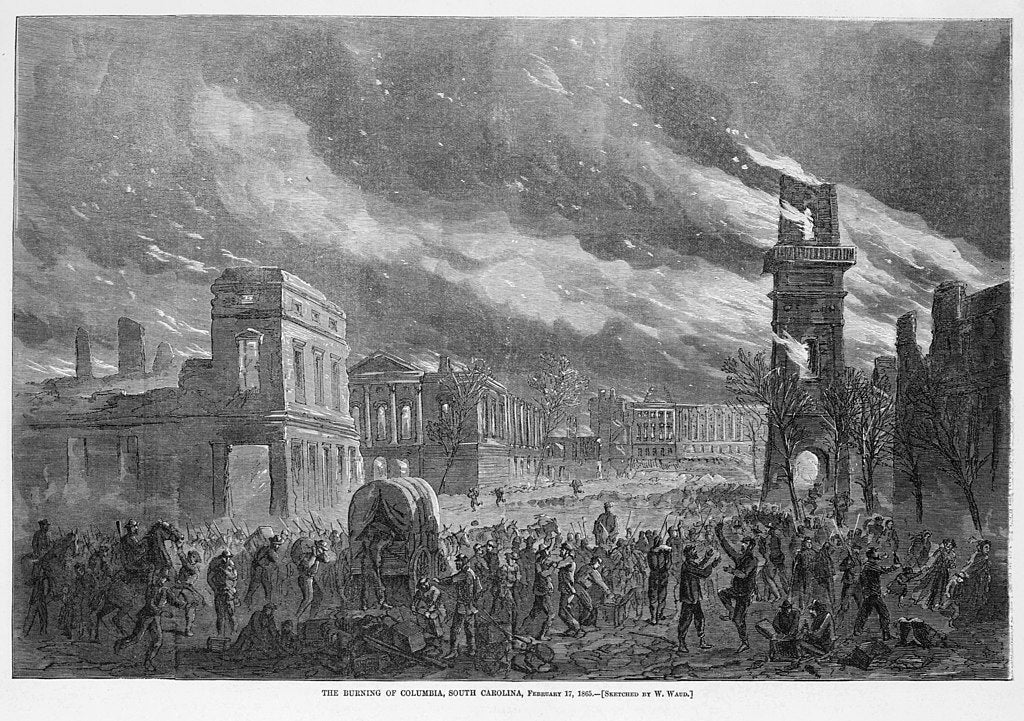 The Burning of Columbia, South Carolina (1865) by William Waud for Harper's Weekly.

In June 1862, Union troops marched into Memphis, Tennessee, after Union ironclad gunboats captured the city from the Mississippi River. It would be occupied by federal troops for the duration of the Civil War.

The 1st Alabama Cavalry was placed under the command of the Union Army’s XVI Corps two months after it was formed. Although the unit spent much of the time scouting and raiding, they were part of the XVI Corps when Gen. Ulysses S. Grant called for reinforcements during the 1863 Siege of Vicksburg.

Under Gen. William Sooy Smith’s 1st Division, the 1st Alabama guarded the army’s flanks and provided a screen for infantry during the battle, which saw the Union capture Vicksburg and split the Confederacy in two. In November 1864, the Alabamans were transferred to XV Corps, under Grant and Gen. William Tecumseh Sherman, after Sherman captured Atlanta, Georgia and infamously set the city ablaze.

From there, Sherman launched his March to the Sea, a strategy designed to punish the South and force an earlier end to the Civil War. To protect him along the way, Sherman personally chose the 1st Alabama Volunteer Cavalry to act as his escort.

On Nov. 15, 1864, Sherman and his army left Atlanta, targeting infrastructure that would cripple the South’s capacity to continue fighting the war and destroying the morale of the population of those southern states. Sherman’s force took food from local farms and homes while destroying railroads, factories, and other agricultural centers.

Not only would this strategy have the effect of weakening Confederate forces all over the country, it would keep reinforcements from making their way to Gen. Robert E. Lee’s army in Virginia, which was caught in a stalemate against Grant’s Union Army.

Sherman and the 1st Alabama paused to look back at the smoldering ruins of Atlanta as they left on Nov. 15, and struck out toward Augusta to the tune of “John Brown’s Body.” The first real Confederate resistance came on the 22nd, when Confederate Gen. Joseph Wheeler’s cavalry fought back near Griswoldville. Wheeler then led a rearguard action against Union forces three days later.

As Union troops advanced across Georgia, they came to Oconee River, where southern skirmishers had set up a line. The 1st Alabama Cavalry engaged the skirmishers while Union engineers constructed a pontoon bridge to cross the river overnight. As the 1st Alabama fought the skirmish line, the Union troops who crossed the Oconee flanked the Confederates and cleared the path forward.

Sherman’s real destination was Savannah, where he would be met by 10,000 entrenched Confederate soldiers, flooded rice fields, and narrow causeways approaching the city. The city was already blockaded by the Union Navy, which allowed Sherman the materiel he needed to lay siege to it.

Before torching the city, he offered the Confederate commander surrender terms, which said he would be liberal with them should they choose to lay down arms, but if he was forced to fight, and would “feel justified in resorting to the harshest measures, and shall make little effort to restrain my army…”

The defenders instead opted to escape. After the fall of Savannah, the 1st Alabama was transferred to Mississippi, where it continued fighting and was present at the surrender of the Confederate Army of Tennessee. In October 1865, the war was over and the unit was disbanded.