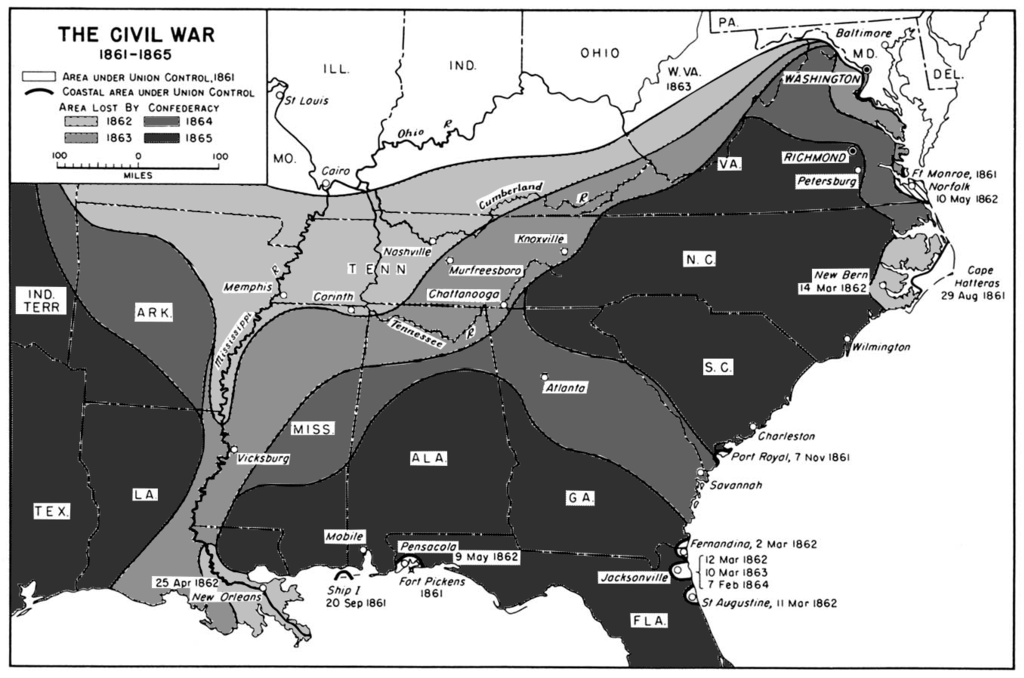 Map which describes the Confederate losses each year throughout the war.

It’s well known that after the election of Abraham Lincoln in 1860, 11 states seceded from the Union to form the Confederate States of America. The subsequent Civil War would rage across the country for almost five years. American history books make southern secession seem like an almost unanimous decision, but it wasn’t as simple as that.

1. The Republic of Winston

The locals living in what we today know as Winston, Cullman and Blount Counties in Alabama didn’t raise crops on large plantations and had no use for slaves. They were mostly poor white farmers, scraping out what food they could manage. When Alabama passed its Ordinance of Secession in 1861, Winston County’s representative refused to sign it and was sent to jail, where he spent most of the war.

2. The Free State of Jones

The Confederacy was a great place to be if you were a wealthy, aristocratic, slave-owning landholder. For everyone else, it wasn’t so hot. To support this gentry and the army fighting for its way of life, Confederate tax agents seized a lot of livestock, food, and cash from already-poor farmers. Much of this didn’t even make it to the army.

With terrible conditions back home and a rough life of hunger and disease in the army, rebel troops deserted by the thousands and Jones County, Mississippi became the place to be for deserters. They organized their own government and protection force to keep the tax collectors away. They even wrote a declaration of independence and sent it to Gen. William T. Sherman.

3. The State of Scott

The border areas between Union Kentucky and Confederate Tennessee were filled with people who sided with either cause. Scott County, Tennessee was one of these border areas, but its people were wholly committed to staying in the Union. When Tennessee passed its secession legislation in 1861, Scott County passed a secession law of its own.

Scott County was one of two counties in the states whose economy was not dependent on slavery to keep it afloat. The residents were not about to go to war with the government to preserve a way of life they didn’t want or need. The governor sent 1,700 troops to subdue the county, but locals organized and forced them to retreat.

Searcy County, Arkansas did not get on board with secession the way the rest of the state did. In the northern part of the state, where Searcy County is located, many of the local remained pro-Union and did not want to see the state secede. To protect themselves from conscription, they formed the Arkansas Peace Society.

Unlike the other members of this list, the Confederacy was successful in destroying this group, but that didn’t mean an end to resistance. Arkansas contributed the second highest number of troops to the Union Army, beaten only by Tennessee – despite having a significantly smaller population.