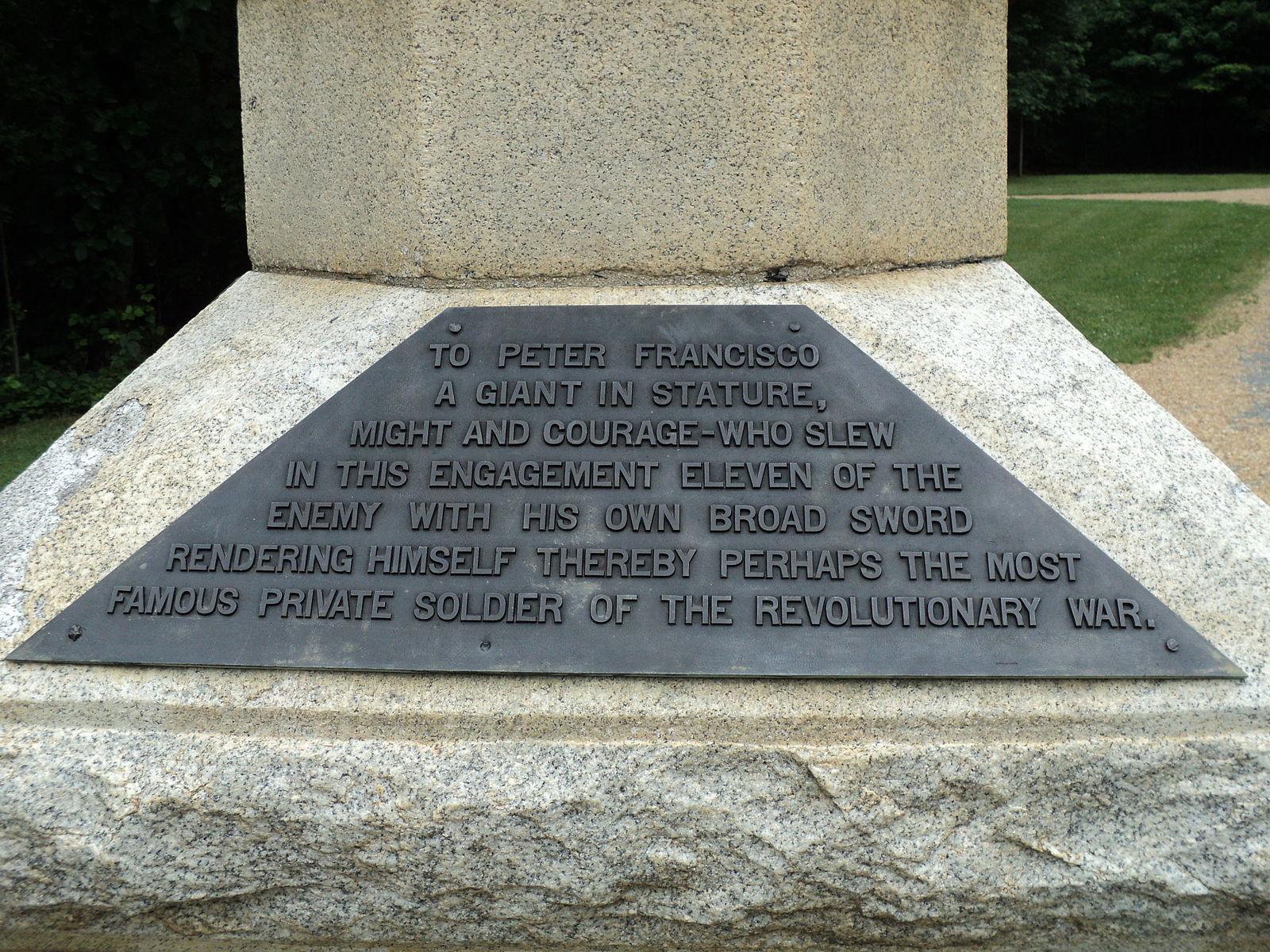 One day in 1765, a 5-year-old boy wearing fine clothes and speaking no English was found on the docks of City Point, Virginia. No one knew where he came from, where his parents were, or even how old he was at the time. All they knew was that he kept repeating the name “Pedro Francisco.” So that’s what they called him, eventually anglicizing the name to Peter.

His past didn’t matter to history, but his future did. When the American colonies declared independence from Great Britain more than a decade later, he would be part of it and become known to history as America’s first one-man army.

The nickname of “Hercules” would come much later, when the boy grew into a man. When the average size of an American colonist was around 5’6”, Peter Francisco stood a whopping 6’6” and 230 pounds – large even by today’s standards. A blacksmith by trade, he was a member of the 10th Virginia Infantry when the American Revolution broke out and subsequently became a member of the Continental Army.

His fighting ability would prove crucial to winning some of the most pivotal battles of the war, and perhaps the Revolution itself.

Francisco was just 17 when he enlisted, and saw action at the September 1777 Battle of Brandywine, where the Americans were attempting to halt the British advance on Philadelphia. Washington was a master of strategic withdrawal, and at Brandywine, it became crucial. The British outflanked the Americans. Washington needed time to escape.

Luckily for the famous general, Peter Francisco’s unit was fighting to hold the 12,500-man British assault. He and the rest of the Continentals were able to hold the line for a full 45 minutes, giving Washington’s army plenty of time to escape. Francisco was wounded in the leg, but he learned he had a real talent for killing Redcoats.

By October, he was back in the fighting, once again keeping the British from advancing on Philadelphia. This time, he fought at Germantown, a battle that very nearly saw an American victory. His strength and prowess on the battlefield became the stuff of legend among his fellow soldiers.

Along with the rest of the Continental Army, Peter Francisco wound up at Valley Forge. There, the army learned to fight from one of the best military minds of the day, Baron von Steuben. He taught the Americans not just how to march, but how to fight with the bayonet.

This would serve Francisco and the Continentals well at the upcoming Battle of Stony Point, where a silent, night time assault on the fortress there began and ended with Francisco leading an advance force of 20 men to mercilessly hack the British and expel them from the area. But Peter Francisco was allegedly not using a bayonet.

According to a legend, which has never been confirmed by historians, Gen. Washington presented Francisco with a six-foot broadsword to honor his skill in battle. Some say this was the weapon he used to slash through the British at Stony Point.

As the second man over the wall at Stony Point and being a man of his size, his legend grew among the soldiers of the American army. But his enlistment was up and he returned home to Virginia. Unfortunately for the British, they started attacking the Southern Colonies, which Peter Francisco took personally.

He rejoined the Continental Army, this time marching to Camden, South Carolina under Gen. Horatio Gates. The result of the battle was a humiliating defeat, but Francisco was able to salvage some of his commanding officer’s dignity. He impaled an British cavalryman with a bayonet and picked the man up off his horse. He then mounted it and put his colonel on it, saving the officer’s life.

Another, maybe mythical story has the big man picking up an American cannon from the field so it wouldn’t be captured by the British. Even if it didn’t really happen, it could have, and that’s all that matters.

Francisco’s next interaction with the British Army came under Gen. Nathaniel Greene at Guilford Courthouse. This is another battle where Francisco is supposed to have received the broadsword from General Washington. Whether he had it or not, he and the Americans killed so many of Lord Cornwallis’ regulars that the British victory became a pyrrhic one. Cornwallis wrote that the Americans fought like demons there.

The next time Peter Francisco encountered Lord Cornwallis’ men was when the British surrendered to the Americans and French at Yorktown in Virginia, effectively ending the war with an American victory.

It was Gen. George Washington who did really say that, “Without him we would have lost two crucial battles, perhaps the War, and with it our freedom. He was truly a One-Man Army.”