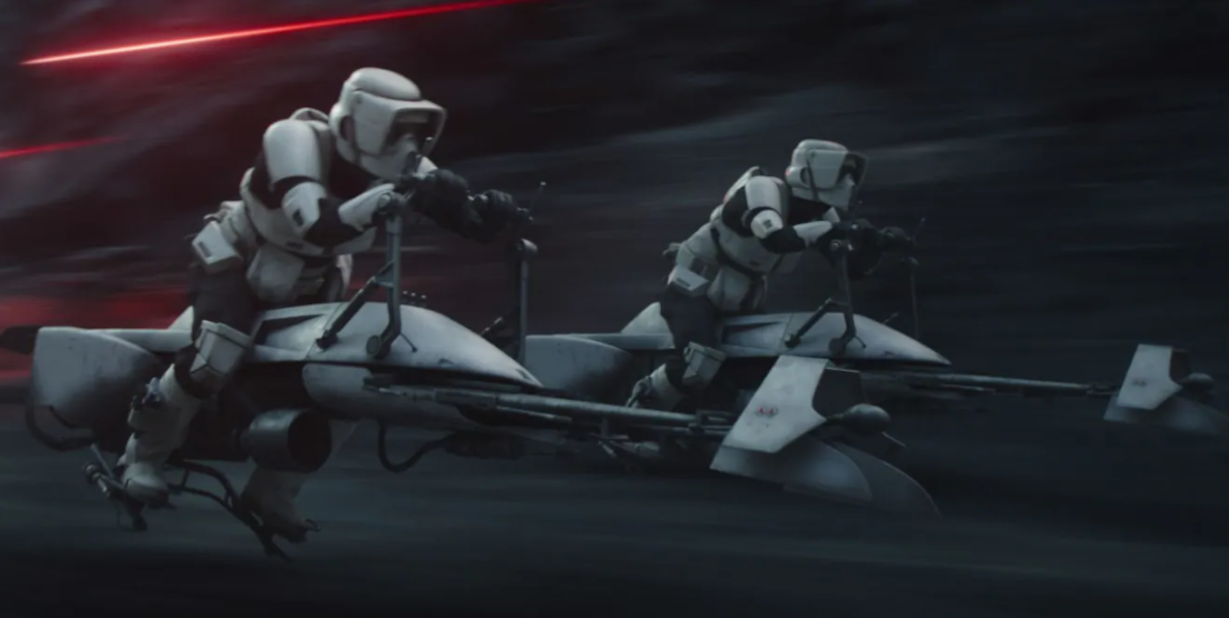 But really, spoilers for The Mandalorian Chapter 12 ahead.

Let’s start with a bit of non-linear history. In the first season of The Mandalorian, we were introduced to the Yoda Baby — an “asset” sought out by the remnants of the Galactic Empire under the orders of Moff Gideon (Giancarlo Esposito). We knew Gideon and his scientist Dr. Pershing (Omid Abtahi) were using the child for experiments and we knew of course that the Yoda Baby has a powerful affinity for the Force, but we didn’t know what the connection was.

Let’s jump to the beginning of The Siege, shall we? Din Djarin and his little charge are working to repair the Razor Crest. Djarin’s got the Yoda Baby in a small compartment trying to re-work some electrical lines. This had me wondering, from a cognitive perspective, how old the Yoda Baby is meant to be here. I know he’s fifty years old (and we know that Yoda lived to be nearly 900 years old) but what’s the age that you would try having your kid accomplish a dangerous task where he can sort of understand your directions but not completely and he can’t speak yet? I’m not a parent, but, like, is this like dealing with a two year-old?

Anyway, after electrocuting the infant they realize they need some help so they head back to Nevarro. We meet some ballsack aliens Aqualish thugs gearing up to murder a cute alien muskrat. Luckily Cara Dune — Nevarro’s new Marshal — returns in time to save the little feller.

Dune and Greef Karga (Carl Weathers, also the director of this episode) have a little side-mission for Djarin while he waits for his ship repairs: they want his help in destroying a nearby Imperial base. (My Dungeon Master pointed out that each episode of The Mandalorian is like a DND session and it made perfect sense. I think that’s also the series’ greatest struggle — the connecting lore isn’t quite strong enough to throw us all around the galaxy with random characters and missions.)

They leave the yoda baby with the other school children (which basically just endangers the other children, right? When has the yoda baby literally EVER not been attacked?) and we are given some new Yoda Baby meme-fuel when he steals a kid’s macaron. Plus now we can eat macarons at Star Wars parties.

Djarin, Dune, Karga, and Mythrol (Horatio Sanz), who was once a target for Djarin and is now an indentured servant of Karga — and the butt of too many bad jokes — head off to the base. Thanks to The Rise of Skywalker, every time I see Stormtroopers die, I wonder if they’re child soldiers. I still hate that JJ Abrams did that to me. Gina Carano’s gleeful little cheers whenever she kills one don’t help.

So here we are back to the controversial little midi-chlorians, introduced to aghast Star Wars fans during The Phantom Menace. The higher a creature’s “m-count,” the more Force-sensitive they are. Here at the base, which turns out to be a laboratory, we learn that Pershing desired the Yoda Baby for his high m-count in order to conduct his experiments.

It looks like Moff Gideon is trying to create a unit of Force-sensitive combatants, which is why he’s so eager to recover the Yoda Baby. After a very Star Wars-y canyon chase and TIE Fighter aerial battle (seriously, how amazing is Star Wars sound design? TIE Fighters sound so cool and distinct), the remaining Imperials are defeated and all is well.

The final scenes reunite us with New Republic pilot Captain Carson Teva (Paul Sun-Hyung Lee), who attempts to recruit Dune to the cause, and introduce us to a new adversary, an Imperial Comms officer (Katy M. O’Brian) who ordered a tracking beacon attached to Djarin’s Razor Crest.