Someone broke down the famous Hitler meltdown scene from ‘Downfall’ 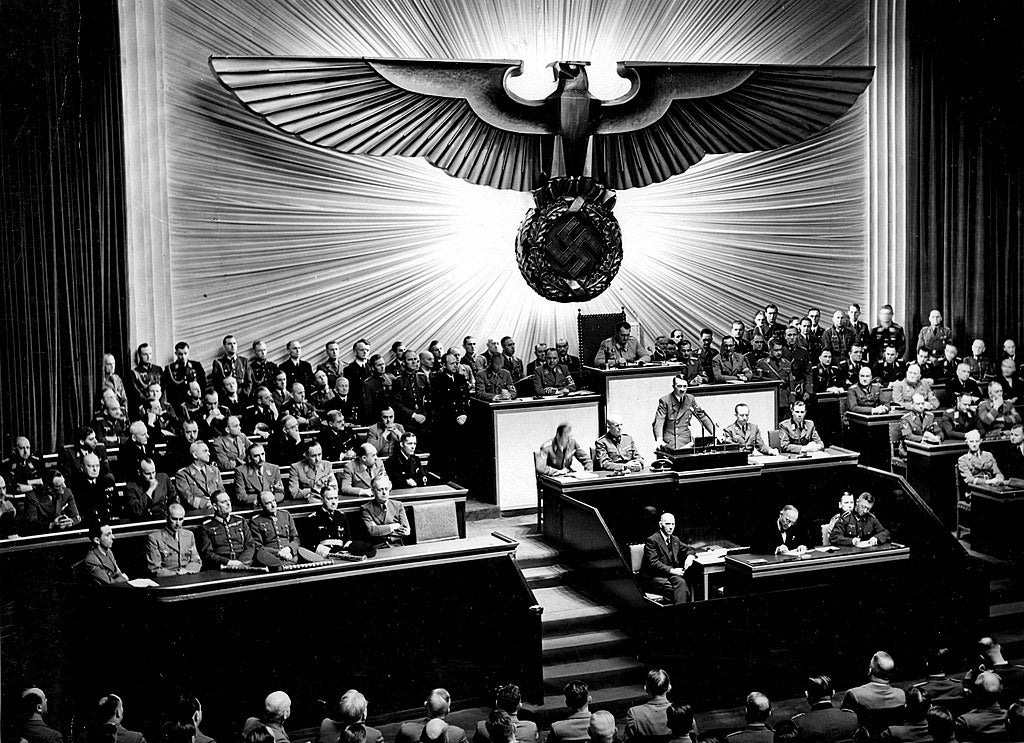 Adolf Hitler delivers a speech at the Kroll Opera House to the men of the Reichstag on the subject of Roosevelt and the war in the Pacific, declaring war on the United States. (Wikimedia Commons).

It’s the basis of a thousand meme videos, from getting his pizza order wrong, to finding out Joe Biden was elected President of the United States, to even discovering his own meltdown scene had gone viral. One of the final moments from the 2004 German movie “Downfall” features the Nazi dictator trying to salvage what was left of the defense of Berlin, only to discover all hope was lost.

And then, he famously loses it. Swiss actor Bruno Gantz’s portrayal of the dictator was so compelling and the scene so dynamic that someone in 2009 uploaded a video of the scene with Portuguese subtitles wherein Hitler complains that Microsoft’s “Flight SImulator X” lacks good features. It caught fire and the internet took it from there.

Fast-forward to 2019, when the YouTube channel “The Great War” began raising money to produce a documentary about the last days of the defense of Berlin during World War II, called “16 Days In Berlin.” The channel began covering the details about World War I but soon began to expand its coverage to cover conflicts during the Interwar years, through 1923.

Like all talented, creative historians, they apparently could not resist delving into the subject of the Second World War. One of the subjects they decided to document was the Fall of Berlin and Hitler’s last days during World War II. To raise money for the documentary (a fundraiser that was successful), they made a series of videos. One of those was giving context to the internet’s most famous video meme, “Hitler Finds Out…”

The most important thing to know about the scene is that it’s a dramatic interpretation of what happened in the Fuhrerbunker during the siege, but it is based on several histories compiled from people who were present. The red army is approaching Berlin, and is just 40 kilometers from Hitler and the German General Staff. They have the city surrounded on three sides and are trying to close the gap to prevent any potential reinforcements from arriving.

This is what the scene is about. The planning room is trying to keep the Soviet Army out of Berlin and Hitler, still directing units on a map. On its way to Berlin is the Waffern 33 SS “Charlemagne” Division, consisting of French troops fighting for Germany.

Chief of the Army General Staff Hans Krebs explains the strategic situation to Hitler, who believes SS commander Felix Steiner is coming with a counterattack that will break the siege and push the Soviet forces back and out of Germany. What he doesn’t know is that Steiner SS Panzer units really only exist on paper, and Steiner declined to send his troops into battle. That’s the news the General Staff is trying to break to the dictator, that Steiner believes the attack Hitler depends on is pointless.

Chief of Operations Staff for the German High Command, Alfred Jodl, on the other hand, seems to have no problem telling the dictator that Steiner’s assault isn’t coming. When Hitler orders people to clear the room, the only remaining personnel are the highest ranking generals in the bunker. Hitler’s now-famous breakdown in the scene is actually a condensed, dramatized version of his thinking over a period of weeks as the war grew ever closer to the German capital.

That’s just the context of the scene. For more details, including the identities of everyone portrayed in the scene as well as the fates of some of those featured, be sure to check out The Great War’s great breakdown.