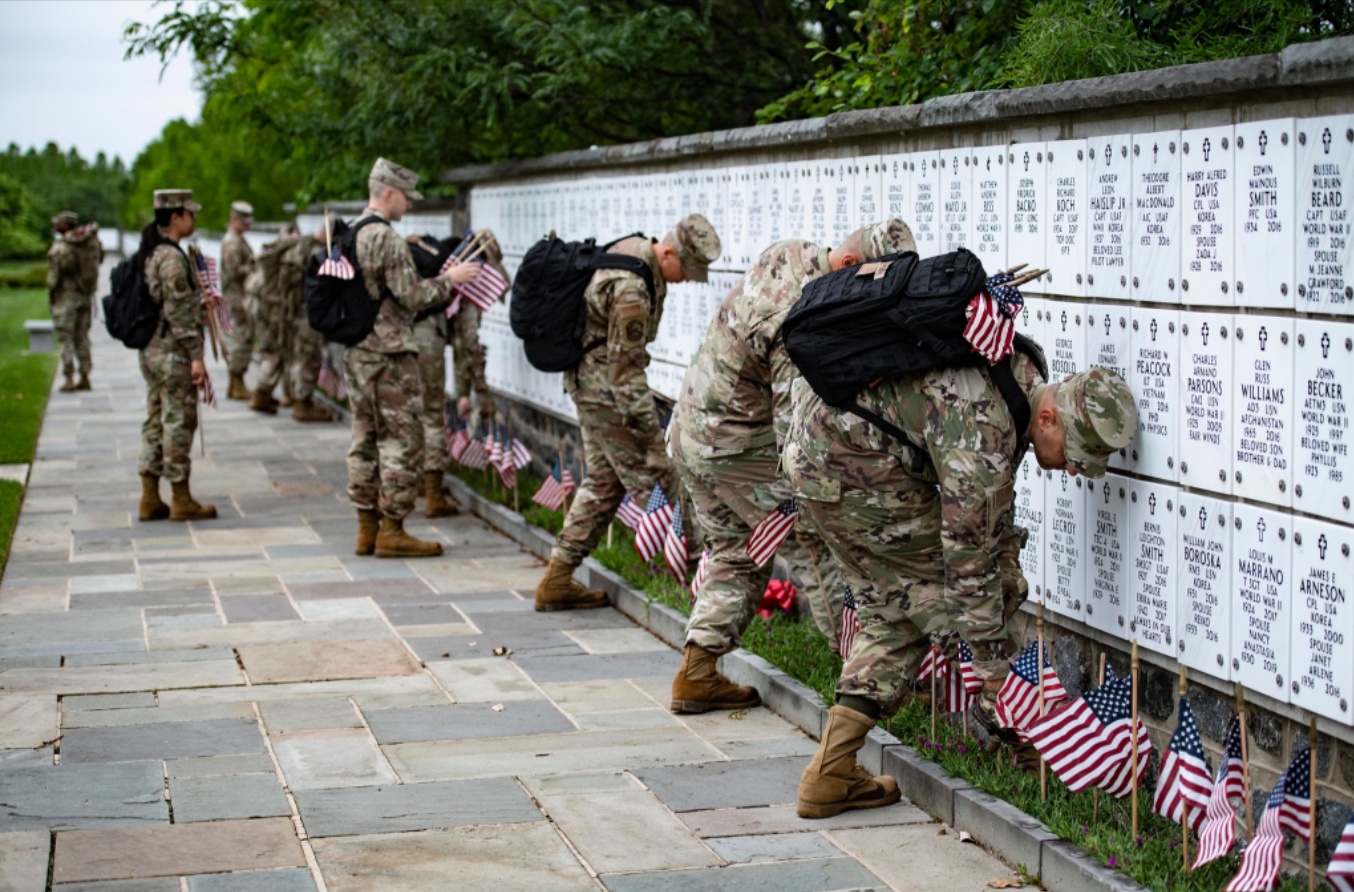 In the pre-dawn darkness of Thursday, May 26, uniformed members of the military spread out among the headstones of Arlington National Cemetery, their rucksacks filled with American flags.

Quietly, they placed a boot against a headstone and pushed a flag into the ground at their heel. Then they moved onto the next headstone and repeated the process until a flag stood at the base of every headstone. The event, known as Flags-In had been a Memorial Day tradition since 1948. While all the branches of the military provide service members to place flags, the soldiers of the 3d U.S. Infantry Regiment, The Old Guard, which conducts memorial affairs for fallen comrades, consider Flags-In a particular honor and a chance to reflect on those who made the ultimate sacrifice for their country.

Despite the early hour, the Old Guard soldiers enjoyed their task. “It feels great,” said Spc. Jahmeo Edwards. “It’s always an honor to come out here and put these flags in.” Spc. Justin Peterson agreed. “It feels good to just roam about the cemetery rather just see it from the roads, or from the major sites such as the Tomb of the Unknown Soldier or the other sites throughout the cemetery.”The task energized Spc. Austin Davidson, “Most of my company has been pretty excited to be here,” he explained. Spc. Chase Kerr felt the same. “It’s great to give back to all the veterans who gave a lot more than I did, before my time.” To PFC Nash Rhoderick, the task means more to those who wear the uniform. “People we work with know people who have fallen and that shines a light on what we do.”SFC Charles McDevit, who has planted flags for four years in a row, understands the importance of Flags In.

“For the Honor Guard to do it, and be part of it, and be a part of this unit, and do it each year that we’re stationed here is a great honor.” 1st Sgt. Antonio Crawley came to the Old Guard to honor all the fallen and their families. “Family members can’t come here to actually place a flag so I’m giving the honors and respect for those family members.”Despite the darkness and quickness of their work, the soldiers took time to read the headstones as they placed their flags. “Just being able to lay eyes on the name and the years and the history of this place is incredible,” said Spc. Justin Peterson. As Sgt. Trevor Kulenich placed a flag, he looked down at the headstone and read part of it aloud. “Mr. Bennington Jr. here, he was a master sergeant, Air Force, World War II, Korea, and Vietnam.” The he reflected, “That’s three wars.”

Some of the soldiers took a holistic view to their task. “It definitely makes me really proud to be an American citizen,” said Lt. Grant Wilson, “and a United States soldier.” Spc. Andre Vann may have summed up Memorial Day best when he looked over the fields of the fallen, some still needing flags, and marveled, “That’s a lot of headstones.”To the combat veterans, there’s a special bond in placing flags. For 1st Sgt. Crawley, who served in Afghanistan with the 25th Infantry Division, there is a world of difference from his days as a civilian. “Being a combat vet myself, I have an understanding about ANC that means a lot more to me now than when I was in high school.”Staff Sergeant Brian Vaughn, who saw combat in Afghanistan with the 3rd Infantry Division, felt the bond. “To see, first-hand, someone lose their life and then to be able to come out here and be a part of something more, be able to give back to them, since they’ve given us everything they had,” he explained, “I feel if I had never been in a combat zone, had never been deployed to a forward area, never seen people lose their lives, I don’t know if I would truly appreciate it as much as I do.”

By 10 a.m. the Old Guard soldiers finished their work and returned to their usual duties, having decorated every headstone in Arlington National Cemetery with an American flag, and just in time for Memorial Day.