MIGHTY 25: Vishal Amin fights for cyber security both in and out of uniform 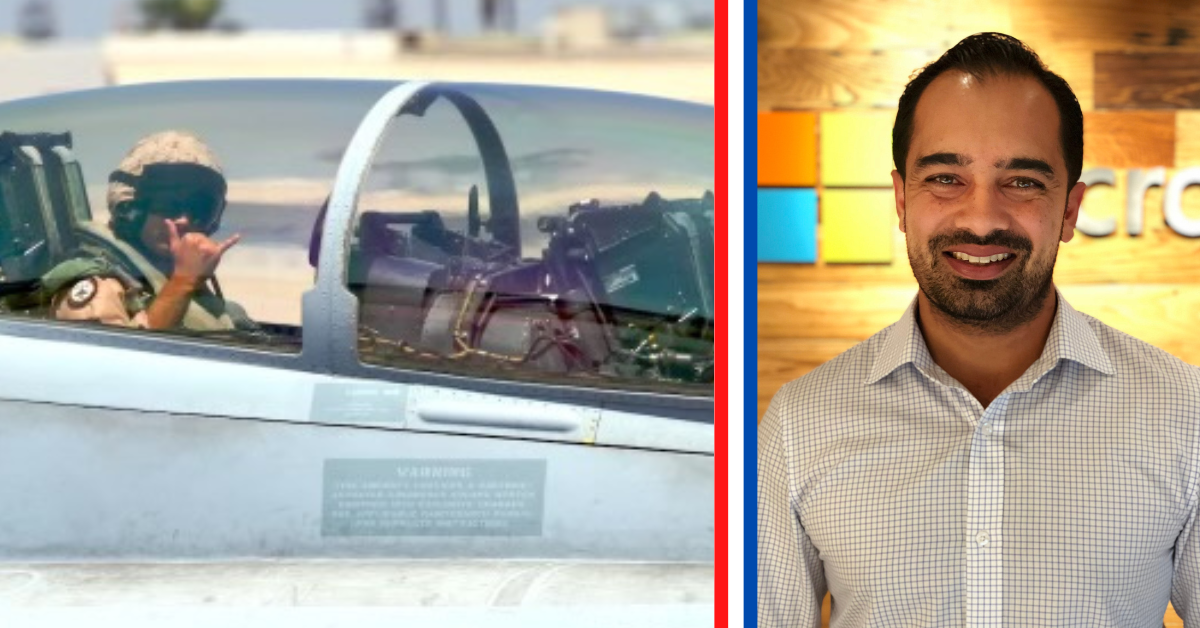 Vishal Amin spent 20 years in the Marine Corps, the tail end of it as a F/A-18 fighter pilot. A data breach would lead to a brand-new career in cyber security to prevent it from happening to anyone else.

But first, he was a 17-year-old kid trying to find his way. “I had actually gone into the recruiters office to get my name off the list of people being encouraged to enlist and walked out having signed up for the Marine Corps,” he laughed. “I like to say joining the Marine Corps and joining the military was the best mistake I’ve ever made.”

It was 1999 and America was at peace and he was actually in the reserves. The attacks on 9/11 would change that. Six years into his now active enlistment, he’d earned a bachelor’s degree – often mailing in essays from wherever he was deployed to at the time. When he was commissioned as an officer, it was initially a ground contract.

Somehow he ended up at flight school, struggling to make it through. “I realized I was at my best when I was stressed or when my back was against the wall when I was in high pressure situations,” Amin explained.

From working with Special Operations Command to spending time with the fleet as a pilot – he did it all. Until he couldn’t.

“It was on the back end of one of my deployments in 2014. Where I was forcibly exited from the service because of a data breach that had happened. That data breach changed my life. I had to live with protection because my personal identifiable information was taken. I was also placed on a kill list by ISIS and it was publicized all over social media and the news,” he shared. “Over the course of the next few years, I worked with the Department of Defense and some governmental agencies. I finished up my retirement at 20 years in the service and really struggled getting out.”

Unable to find a job and with a family of five to take care of, things went downhill fast.

“We lost our home and our sense of life, all of that. We had to recover from that. I was fortunate enough to find passion in what I did eventually,” Amin said. “I wanted to make a difference in ensuring that what happened to me never happened to anyone else.”

Giving his time and skills to organizations like the Travis Manion Foundation helped fuel his fire to learn everything he could about cyber security.

“I think over the course of time, I was able to build successful workflows and have a successful impact in the public sector, then I was able to find mentors and mentees. I was able to always say yes to things that came my way and found opportunities for people to invest in me where I invested in them,” Amin explained. “That led me to a place where I had one of my sponsors and mentors bring me to Microsoft.”

As the Senior Director of Security Compliance Identity Management and Privacy, he’s a busy guy. But he credits his time in the military, both good and bad, for getting him to where he is today.

Service is the Foundation

“I try to stay grounded in character strengths so I can make a greater impact than just on myself. I was able to invest my passion into building this business and building and seeing the growth of technology within the world. I never thought of it as I’m a veteran influencing the veteran space around cybersecurity,” Amin shared. “I came into the industry with a set of values and this foundation of character strengths and morals, which, without the military community wouldn’t be foundational in my approaches. I wouldn’t be able to make the impact that I’m making now and be able to build arguably the largest cybersecurity business in the world right here at Microsoft.”

Reflecting back on his life and his family’s own legacy, it’s hard to imagine where his own path led him. Amin’s father grew up in a refugee camp because his parents had been exiled from India. “Where you come from is important in building your perseverance,” he added.

So, what would people be surprised to learn about Amin? He was heavily into bull riding in college and despite growing up in California and residing there now – he absolutely loves his cowboy boots and hats.

Do the Next Right Thing

Where he was once struggling to find a job, Amin takes joy in being able to provide jobs for others today. “I’m privileged to be able to live this life and write policy for solving the job gap in cyber security. Years ago I was missing mortgage payments,” he shared. “Don’t ever feel like you have to validate who you are and ground yourself in the actions you take.”

As for how Amin lives his life of purpose and encourages others to do the same? “Just do the next right thing,” he said. “Everything you do, whether it’s for a person, a place or a thing, that’s impacting every human in the world.”