MIGHTY 25: Naval officer Kayla Barron is serving us in the oceans and the stars 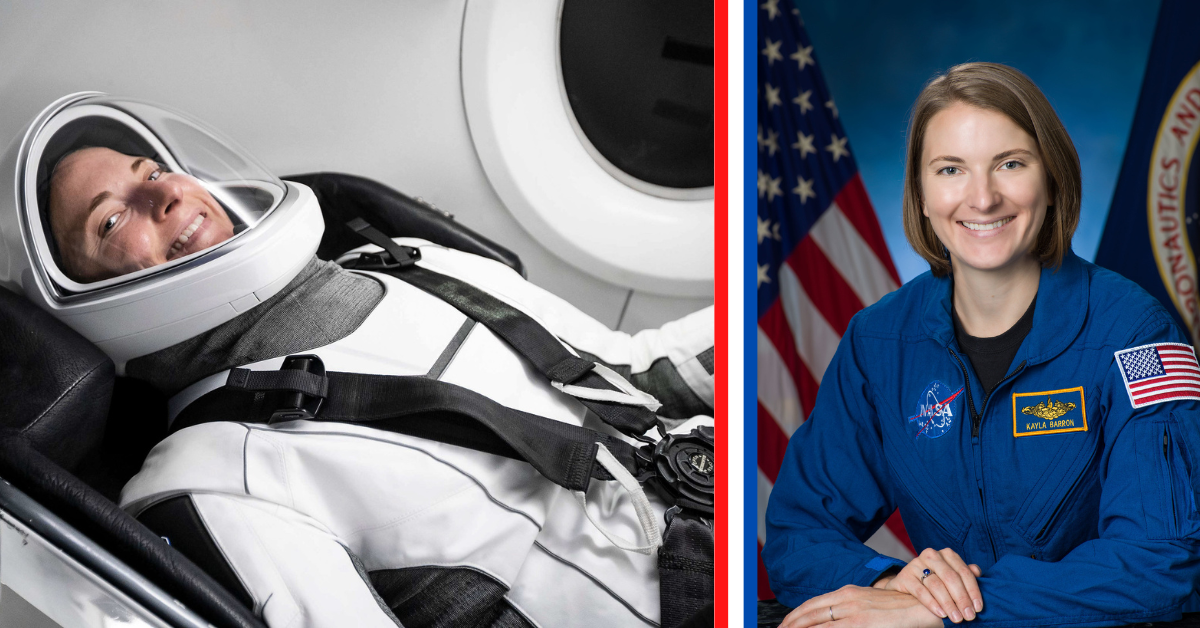 Lt. Commander Kayla Barron never dreamed she’d be an officer on a naval submarine – let alone in space. But this U.S. Naval Academy graduate has always committed to shooting for the stars, pun intended.

“I had an early inkling I might want to serve. I was living in Colorado, in early middle school, and not far from the Air Force Academy and my dad kind of planted the seed that maybe I might want to go to a service academy someday,” she explained. “I have two incredible sisters, I’m in the middle of three girls and my big sister from before she could talk and knew she wanted to be a doctor and then became one. But I never had that kind of clarity.”

A week before she turned 14-years-old, Barron watched the terrorist attacks on 9/11. It was the day which would guide everything she did afterwards.

“Watching the way our nation came together was really, really inspiring for me and I think, prompted a lot of reflection on what I wanted my life to mean,” she shared. “I decided I wanted to commit myself to a mission bigger than just myself. I also wanted to challenge myself to develop the traits, attributes and skills that I would need to contribute to a team that protects our home, our way of life and our values.”

After graduating from the Naval Academy in 2010, she made the decision to pursue submarine warfare – becoming one of the first women assigned to the duty.

“I think one of the things that makes the Naval Academy and the other service academies so special is every single professor and officer there, whether they’re civilian or military, are there because they believe in the mission of the school –  which is to develop you as a young leader,” Barron said.

Once below the surface, she gravitated towards the Chiefs mess.

“They’re intrinsically motivated and really care about their jobs. I think the most important thing I sensed even at that young age was that I wanted to be the kind of leader that those sailors would be willing to follow. And even more importantly, those were the kinds of sailors who would be willing to shape a leader they’d be willing to follow,” Barron said. “I knew if I showed up with the humility to learn and the willingness to work hard to develop the competence I needed to lead in such a complex environment they would make sure that my stumbles became learning opportunities, just not failures.”

And they did. As Barron reflects on her military and now NASA career as an astronaut, she credits those Chiefs with the mentorship which made her ready to tackle the challenges and – the stars.

The path to becoming an astronaut occurred at a networking event, where she met one. As the woman described the work they did, Barron couldn’t help but notice the similarities.

Reaching for the Stars

“I had never even allowed myself to dream of it even though I was inspired by the space program and paid attention to it. I never thought that that was something that I could do. But my experience in the Submarine Force where I was given the opportunity to lead right at the edge of my abilities and grow beyond that,” she shared. “Working in this really complex environment where people aren’t supposed to be under the surface of the ocean or in the vacuum of space, it takes a really deep similar set of technical and team challenges to do that. With the support of some really awesome mentors and my amazing husband I had the confidence to decide to apply.”

Despite not thinking she’d be chosen, she got the call from NASA in 2017. Barron is the first and youngest female astronaut who’s been chosen for NASA’s 2024 Artemis moon-landing program.

As for what advice she’d give those on pursuing goals, it was simple.

“All these decisions are sometimes so big and you just have to make the next right choice. You can really easily lose sight of it if you’re worried about ‘Where am I going to be in five years, 10 years’. You can miss the best opportunities that way,” Barron shared. “I think sometimes if you’re struggling about a transition or trying to chart a new path, sometimes if you can just make the next right choice, it opens your eyes to a whole new set of pathways that you didn’t even know were there.”

To learn more about this MIGHTY Naval officer and NASA astronaut, click here.