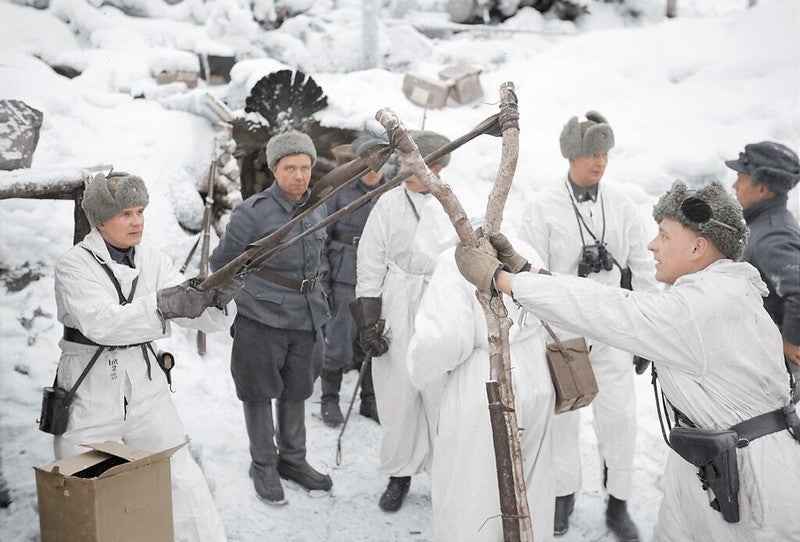 Finnish Soldiers during the Winter War using a slingshot to lob grenades at the Soviets. (Cassowary Colorizations, Flickr) https://www.flickr.com/photos/cassowaryprods/34868887994.

What does an expansionist country do when it needs an excuse to invade a neighbor? Create one, of course. Their smaller, weaker neighbor isn’t going to spark a conflict on their own. It’s the perfect time for a false flag attack, where one country carries out a covert attack, disguising it to look like it was done by someone else.

The term is from old-timey naval warfare, where one ship flew a different nation’s colors before attacking as a means to get closer to their target. “False flag” is not just the stuff of conspiracy theorists and the tin foil hat society, there are actually precedents for this.

False flags happen a lot more often than one might think, which is why conspiracy theorists are so quick to draw that conclusion. The four wars on this list started under false pretenses, so maybe it isn’t that crazy to think false flags aren’t completely gone for good.

The Japanese set their sights on Chinese Manchuria as soon as they beat the Russians in their 1904-05 war. Japanese soldiers were already stationed in the provinces, ostensibly to protect the Japanese-owned South Manchuria Railway. Those troops were often bored and conducted raids on local villages. While the Chinese government protested, there was little they could do – the Japanese wanted the Chinese to attack their forces as an excuse to invade. The Japanese got tired of waiting.

A 1st Lieutenant from the Japanese 29th Infantry planted explosives on the tracks that damaged a 1.5-meter section of rail. It had little effect on the railway’s operations. In fact, a train on the track easily passed over the damaged area. The next day, September 19, 1931, the Japanese started shelling Chinese garrisons and attacked them. In one instance, 500 Japanese troops bested 7,000 or more Chinese. Within the next five months, the Japanese army occupied all of Manchuria. WWII in the Far East had begun.

In August 1939,  SS commandos, dressed as Poles, stormed and captured a radio station in what was then called Upper Silesia, in Germany. The attackers broadcast a short, anti-German message in Polish. The German assailants wanted the appearance of Polish aggression, murdering a German farmer who was caught by the Gestapo and killed with poison. The body was dressed as a saboteur, shot a number of times, and then left in front of the radio station.

A few prisoners from the Dachau Concentration Camp received the same treatment, only their identification was made impossible as the Germans destroyed their faces. This was all part of Operation Himmler, designed to create justification for the invasion of Poland, which began the next day. World War II in Europe was on.

3. The Shelling of Manila – The Winter War

The Soviet Union was chafing under all of the nonaggression treaties on its Western border. Because peacetime seems to be boring for Communist regimes, Stalin decided he needed to mix things up a bit. Since a war with Germany seemed like a war he would most definitely lose on his own, he opted instead to invade Finland, a war (he thought) he could win easily. He couldn’t invade Finland legally because he signed a full three treaties that prevented him from doing so, including his entry into the League of Nations. Stalin, nice guy that he was, decided to go ahead anyway and set out to make Finland look like the aggressor.

On November 26, 1939, the Soviet Red Army shelled the Russian village of Mainila, 800 meters inside Soviet territory. The Finns even saw the explosions and offered to help investigate the incident, which Stalin declined before blaming the whole thing on the Finnish army. Mainila was out of range of the Finnish guns, but that didn’t matter. The Russians already got the propaganda boost and invaded Finland four days later. The war lasted five months and while the Russians captured 11% of Finnish territory, it came at a high cost: the Finns suffered 70,000 casualties while the Soviets had more than a million.

4. The Gulf of Tonkin Incident – The Vietnam War

On August 2nd and 4th, 1964 the USS Maddox was on a signals intelligence patrol in the Gulf of Tonkin off the coast of what was then called North Vietnam. She was confronted by three North Vietnamese torpedo boats who got a little too close for comfort. The Americans fired three warning shots. The Vietnamese opened up on the Maddox from torpedo boats.

The Maddox responded with 3- and 5-inch guns. The only thing wrong with that retelling of the incident is everything. The August 2nd attack happened but the Defense Department didn’t respond. The August 4th attack never happened. This is problematic because it was the justification for Congress’ passing of the Gulf of Tonkin Resolution, giving the President full authority to use the military to assist “any member or protocol state of the Southeast Asia Collective Defense Treaty” threatened by Communist aggression without a declaration of war.