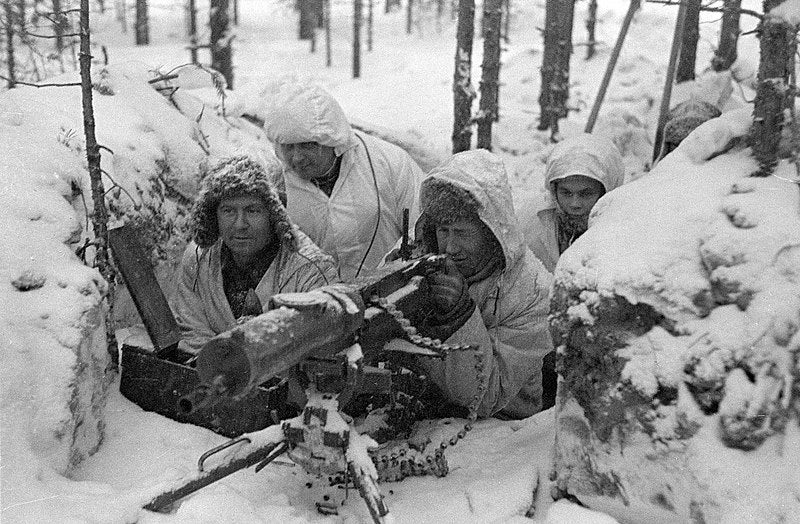 The war between Finland and the Soviet Union was cold, not just in terms of temperatures on the ground during the fighting but also with feelings each side had toward the other.

Before World War II erupted in Europe, the Soviet Union invaded Finland in a war of expansion. It was ultimately able to  get some concessions from the Finns before a peace treaty was forced on Finland.

The treaty gave eight percent of Finland to the USSR and Finns were not happy about it, considering they inflicted so much damage to the Red Army. Finland was determined to get those areas lost back somehow. The 1940 peace agreement held for 15 months, until Nazi Germany invade the Soviet Union in Operation Barbarossa. Finland joined the Germans in what it called the Continuation War.

The Continuation War was just as harsh as the Winter War (or the First Soviet-Finnish War, depending on which history you choose). Finns inflicted an astonishingly asymmetrical number of casualties on the Soviet Union, with the highest estimates reaching nearly a million Soviet killed, wounded, and missing, compared to a quarter of that for Finland.

A lot of the casualties from both sides came about because of the brutality of the fighting itself. This was the war where Finnish troops and partisans perfected the Molotov Cocktail, where Finns put booby-trapped Russian soldiers on display so they could snipe at soldiers who tried to help, and Finns divided and slaughtered Red Army units wholesale in motti attacks.

One of the places the Finns were keen to recapture was the Karelian Isthmus. Karelia was, in their view, taken from them by the 1940 Moscow Peace Treaty, and this traditionally Finnish area was keen to be back in Finnish hands.

When the Soviets were forced to retreat from the Karelian city of Viipuri (today known as Vyborg), they scattered radio-controlled anti-personnel mines throughout the city. The Finnish Army, taking the city, discovered the mines, but not the means to detonate them. To the Finns, it seemed the explosions were happening almost at random.

At first, they thought the mines were triggered by timing devices, but after a 1,200-pound bomb was uncovered under the Moonlight Bridge, Finnish engineers began a suddenly-urgent mission to figure out the means to detonate the mines. For starters, they began interrogating Soviet prisoners of war.

Those POWs revealed that the Red Army could remotely blow the mines with a three-chord radio transmission signalled at a specific frequency. The Finns, in order to disrupt the Soviet transmissions, rigged a broadcast car with the Säkkijärvi polka – also known as the Karelian-Finnish Polka” – that would disrupt the incoming Soviet signals.

For three months, the polka battle of the airwaves continued as Soviet troops tried to destroy the city remotely and Finnish engineers tried to dismantle the Red Army mines, all amid a constant stream of disruptive polka music. In the end, even if the engineers could find and finish all the mines, the mines would have run out of battery power. The Finns won the day with the polka.