Post-Traumatic Winning: All Marine Radio host helps Marines deal with trauma - We Are The Mighty 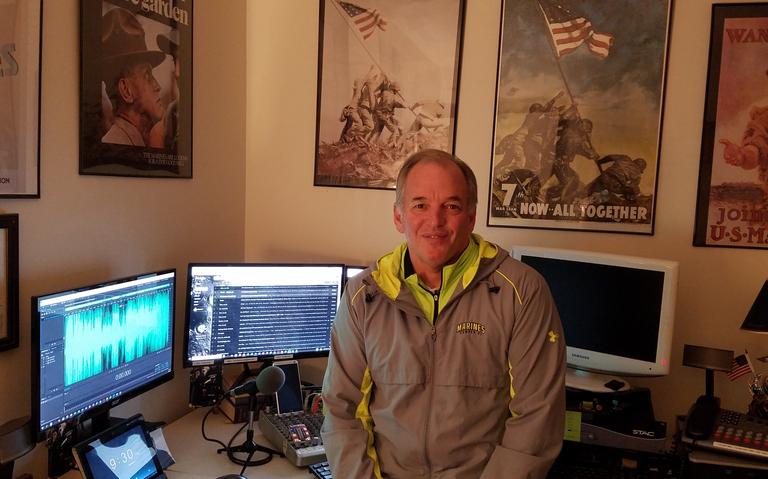 Like many Marines, when Mike McNamara retired from the Marine Corps as a major, he was looking for ways to continue serving and making a difference. He found his calling as a radio host, serving as the president of Post-Traumatic Winning, a program that offers guidance and support to those suffering from post-traumatic stress disorder.

This interview continues an ongoing series, featuring former and retired Marines who have transitioned out of the Corps, and into new roles within society. McNamara’s path in life is more unique than most, from an upbringing in a traditional American family surrounded by baseball, to a university degree followed by a brief foray into financial services, before embarking on an extensive career in the Marine Corps as an infantry officer. All this, before transitioning into talk radio on his own show, “All Marine Radio,” and then founding the program Post-Traumatic Winning.

McNamara shared about how and why he got into talk radio and veteran advocacy.

“Marines’ courage, selflessness and work ethic are traits I’ve always loved,” McNamara said. “The culture of Marines is fascinating and multifaceted – it’s tough, funny, relentless and compassionate. I believed, because of my experience with talk radio, I could combine that with the Marine Corps culture and talk about post-combat related mental health (military suicide numbers at the time were escalating severely) … and in doing that, help to ‘normalize’ the discussion about mental health to ultimately put downward pressure on our destructive behavior numbers. Of course, a reduction in statistics is the outcome; I pursued this ‘semi-retirement’ path because I wanted to bring a human element to engaging Marines – and other servicemen and women – in productive dialogue about trauma. And yes, I wanted to work for myself and be my own boss.”

McNamara was an instructor at the Basic School and the Infantry Officer Course from 1989 to 1992, which impacted his life immensely. Maneuver warfare had just been introduced into the Corps, which required time to learn, and a unique understanding of its principles to be able to teach effectively. He served at TBS and IOC with the likes of retired Marine Gen. John Kelly, retired Marine Lt. Gen. Robert Milstead, Lt. Gen. Joseph Osterman, Lt. Gen. Lewis Crapporatta, Lt. Gen. Stacy Clardy, Gen. David Furness, Maj. Gen. Paul Kennedy and Col. Duffy White.

McNamara was born in Sacramento, California, the second child of four children, and only son. He grew up attending Catholic school and was involved in student government through high school. In 1983, McNamara graduated from the University of San Diego with a degree in economics, moved to the San Fernando Valley and went to work for Merrill Lynch, Inc. After little more than a year, he decided the financial services industry was not for him. Thus began a search for a career that blended his passions for both coaching and teaching. Both before and during college, as his father was manager for the Boston Red Sox, McNamara often saw Marines in and around town and was doubly impressed by their presence and stature in the community.

“I had always played team sports growing up, where the focal areas were discipline, hard work, teamwork, resilience and winning … I believed I would find all of that, as well as find opportunities to apply my own leadership skills in the Marine Corps. While I had family in other branches, there were no Marines in my bloodline. I had no clue about [military occupational specialties], and the [officer selection officer] showed me a picture of an F/A-18. I signed a flight contract right there … which I asked to get out of at TBS in hopes of becoming an infantry officer.”

McNamara’s pride in his Corps service led him to develop Post-Traumatic Winning.

“Like most Marines, I am extremely proud that my title is ‘United States Marine.’ Both of my sons have earned that distinction as well. I often say, ‘I don’t love my sons more because they are Marines, but I sure do like them more!’ I had a great career; I was able to return to active duty and serve three deployments to Iraq and Afghanistan. I’m proud of the work I did at the Infantry Officer Course, where they still teach a decision-making class I developed. I am proud of the work I do now with Post-Traumatic Winning – dedicated to helping people effectively deal with trauma.”

McNamara has had many fulfilling experiences through veteran advocacy. “It has been probably the most amazing experience in my life. Working with the 2nd Marine Division, we saw suicide attempts decline by 50 %, whereas self-reporting of suicidal ideations increased 50 %. That data and tangible achievements opened a lot of doors.” McNamara believes the Marine Corps, with his program’s support, could be the national leader in achieving a reduction in suicide rates. “I am a huge fan of the USMC culture of toughness but behind that toughness is a human being,” said McNamara. His passion is to extend the program beyond just the military and to every university and high school in the country. His goal is to show people that, despite their trauma and suffering, there is a path to success.

McNamara has been working on a book and posting YouTube videos to expand the reach of his message. Putting himself “out there” has allowed for his message to reach many people.  The feedback he receives is positive and always helpful, especially in terms of gathering data for research. One compelling statistic McNamara came across in his research is that in 2018, of all the Marines who took their own life, only 18 % of them had seen combat. The other 82 % had not, which helps validate that trauma issues are not just combat-related.

McNamara has spoken at countless military events and across all branches of the military. His program has become increasingly popular among senior officers to the likes of three-star commands. Many Marines make return trips to attend training two and three times. This simple fact not only speaks to how useful the training is, but also to how seriously leaders of Marines view the topic. In the Marines, “Semper Fidelis” is a verb and requires action.  McNamara found that because he is a Marine, he is effective at getting the point across.

“My gift is putting it into Marine speak,” he said. “I don’t have a masters or PhD, I am just an infantry officer, so I not only share their experiences, but I share their language.”

McNamara has Marines from all over the country listening to his radio show. They reach out with a spectrum of issues, many of which include untreated trauma. Although he does not come at this through a faith-based perspective, it still resonates with Marines on many levels. He acknowledges that there are many similarities in this program to the path that Christ walked.

The Post-Traumatic Winning program, which is separate from his radio program, comes with three goals and 10 commandments:

McNamara stated that, for the program, if commandments one through six are true, then you must learn how to co-exist with the trauma. If seven through 10 are true, then the second goal is to live with self-discipline. He said, “You have to be able to develop a plan to deal with the white-hot anger that comes with trauma, otherwise you will be in a world of hurt.”

The servant leader in him was very apparent as he spoke about what it means to personally be involved in veteran advocacy.  “It’s amazing on a daily basis,” he said. “The Marines’ stories are often amazing tales of perseverance in life and that discovery is a reward in itself. I love that for many of them it’s the first time they’re talking about these issues in public. Marine DNA is special … their stories are special … and the stories of what they do after they leave the Marine Corps are just as compelling as what they do on active duty.”

McNamara is grateful that he has some notable supporters for his advocacy work which include Marine Vietnam veteran Bob Nilsson, who runs an organization called the 100 Entrepreneurs Foundation, based in Washington, D.C., and which helps veterans start their own business. Nilsson saw the potential and the need for something like the 100 Entrepreneurs Foundation because of his post-Vietnam experience. Another Marine and Vietnam veteran that influences McNamara is Jack Riley, whose example and wisdom inspire McNamara to do more each day.

Mike McNamara’s achievements span many areas. He is proud of his four children, of having been a Marine Infantry Officer, of serving the country he loves and today, that he’s found a way to continue to positively transform lives and make a difference to those struggling with post-traumatic mental health.