Check out this badass gun truck from Clandestine Media Group 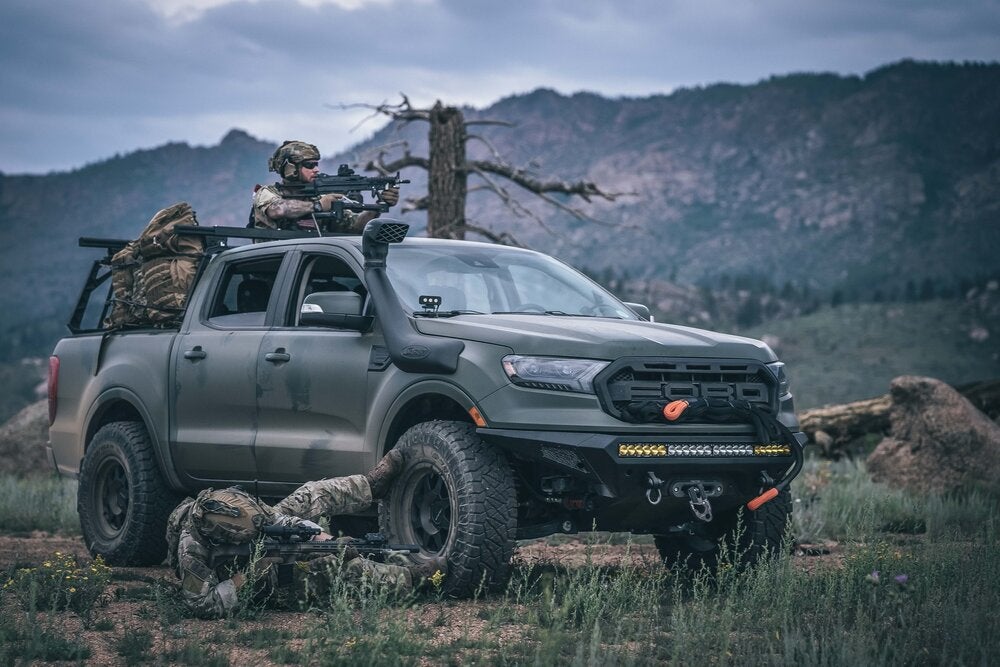 Military stock photos suck and DOD photos can’t be used for private advertisement. So when serious companies like Trijicon and Kimber need marketing material for their products, they turn to companies like Clandestine Media Group. Comprised of veterans including a former Green Beret and a Recon Marine, CMG provides photography services that are as authentic as possible.

CMG prides itself on its attention to detail to make their photoshoots relevant, accurate and engaging. A major factor in this is props. Everything from tactical gear to weapons accessories has to look good and be just right. Of course, if something as big as a vehicle is used as a prop, it definitely needs to be right. Enter CMG’s 2021 Ford Ranger.

Overseas, Special Forces tend to use the legendarily reliable Toyota Hilux. However, the un-killable truck is extremely difficult to acquire in the United States. Unhappy to “half-ass it with a Toyota Tacoma,” CMG opted for the Ford. Built for the U.S. market in Wayne, Michigan, the Ranger allows CMG to sport an American-made truck.

Moreover, the Ranger has seen increased use by U.S. and foreign government elements overseas. In fact, the Afghan National Army and Police amassed a fleet of over 40,000 Ford Rangers by 2012. But, staging Special Forces-inspired photo ops can’t be done with a base Ranger straight from the dealership lot. CMG had to spec their Ranger out, and boy did they.

To build their Ranger, CMG started with the Lariat model. While it’s a nice truck, a chrome grill and leather upholstery doesn’t exactly scream tactical. So, CMG turned to Grey Man Tactical for the majority of the truck’s interior and exterior trim. Camburg suspension was fitted along with Stealth Fighter bumpers and sliders from Addictive Desert Design to make the truck a more capable off-roader. To mount a gun on the gun truck, CMG gave their Ranger a Leitner Design Bed Rack with a gun mount for an M249. Other accessories to round out the package include Method Race Wheels, Nitto tires, a Safari snorkel and Alpha Rex headlights.

CMG will use the truck as a prop in company photography. It can also be rented by clients to accommodate their specific marketing needs. As defense manufacturers vie for the next government contract, keep an eye on their promotional material for CMG’s tricked out Ford Ranger.