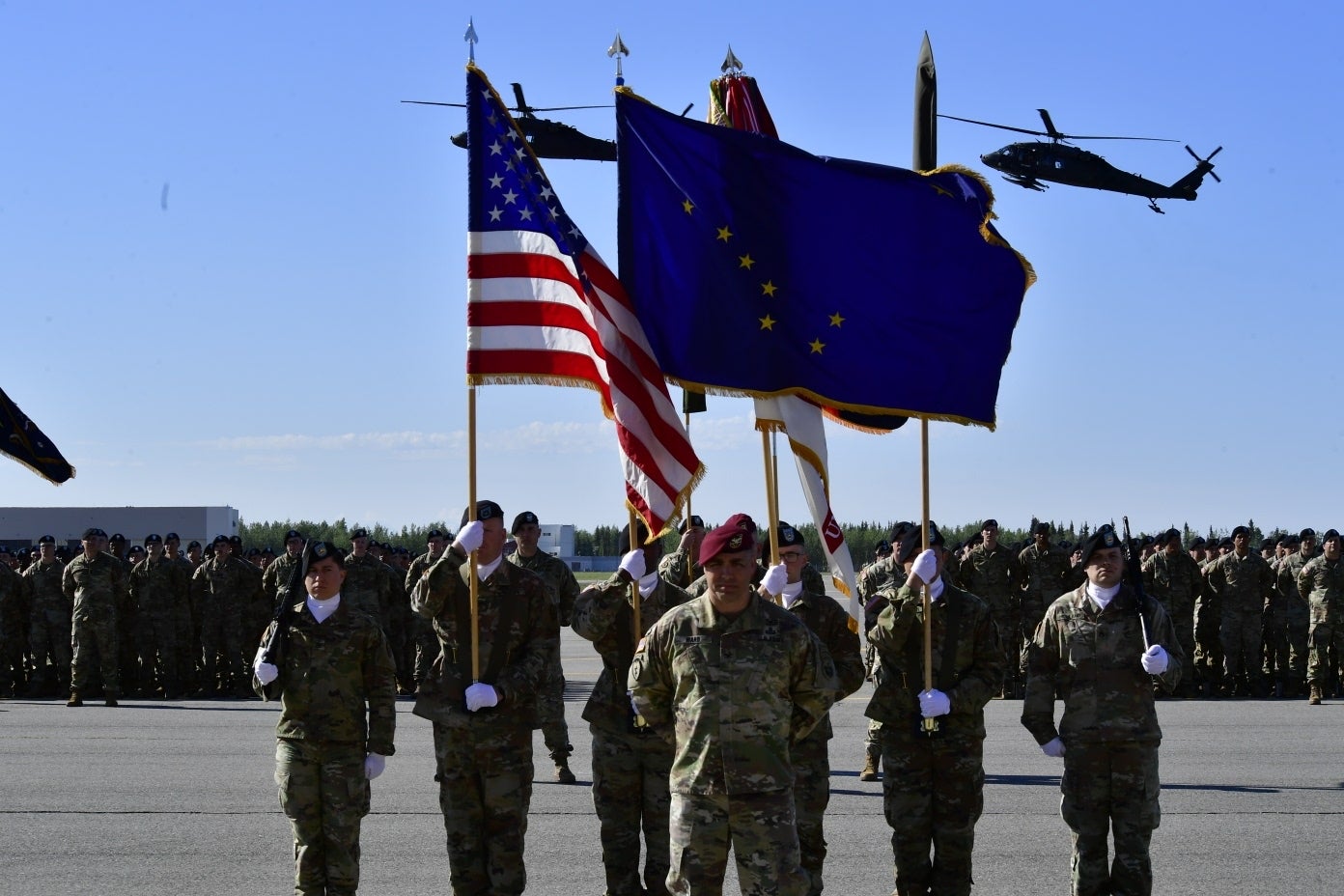 Unit identity and legacy is a powerful factor in forming a team. From “Climb to Glory” to “Currahee,” the Army especially highlights its proud history and lineage to inspire today’s soldiers in carrying out their mission. In an effort to refocus US Army Alaska to the force’s Arctic strategy and create a stronger sense of purpose and identity in response to a spike in suicides, the Army reflagged the command and reactivated the famed 11th Airborne Division.

Following the successes of German paratroopers early in WWII, the US stood up its own airborne units. The 11th Airborne Division was activated on February 25, 1943 at Camp Mackall, North Carolina. Troops were trained and the division was built up, but held in reserve until June 1944 when the 11th Airborne was sent to the Pacific. Following months of jungle training and acclimatization, the paratroopers saw their first action on the Philippine island of Leyte in November, though they were employed as conventional infantry rather than airborne infantry.

On February 3, 1945, the paratroopers of the 11th Airborne Division made the unit’s first combat jump at Tagaytay Ridge, near Manila, on the main Philippine island of Luzon. Despite some delays and missed drop zones, the airborne force successfully assembled and cleared the ridge of Japanese forces before joining the advance on the capital city. Following the intense fighting that led to the liberation of Manila, elements of the 11th Airborne took part in one of the most successful rescue operations in modern history.

As part of the liberation of the Philippines, General Douglas MacArthur placed great emphasis on rescuing American and Filipino prisoners from Japanese camps. On January 30, 1945, US Army Rangers, Alamo Scouts, and Filipino guerillas raided the Cabanatuan Prison Camp and rescued over 500 POWs. Following this success, B Company, 1st Battalion, 511th Parachute Infantry Regiment, 11th Airborne Division conducted an airborne raid on the Los Baños prison camp. Joining with 300 US troops and 800 Filipino guerillas, the paratroopers hit the camp hard and killed the entire garrison of 250 Japanese soldiers. The raid was a resounding success and 2,417 civilians, including women and children, were rescued.

The 11th Airborne would see its last combat operations in June on northern Luzon. Troops encountered heavy resistance from the last of the Japanese defenders near Aparri. Although fighting continued until September, the encirclement of the Japanese forces was the last of the 11th Airborne’s combat actions. The planned invasion of Japan had the 11th Airborne as part of the Sixth Army’s operational reserve, to be called up if needed. However, the surrender of Japan changed their mission to one of occupation.

On August 30, 1945, the 11th Airborne was assigned to Japan as part of the allied occupation force. The paratroopers were posted to Okinawa, Yokohama, and even the northernmost island of Hokkaido. In May 1949, the 11th Airborne was recalled to the US and transferred to Camp Campbell, Kentucky where it became a training unit. One infantry regiment was detached for combat during the Korean War, but the division was inactivated on June 30, 1958. On February 1, 1963, the division was temporarily reactivated as the 11th Air Assault Division (Test) to experiment with helicopter operations. However, the division’s personnel and equipment were eventually transferred to the 1st Cavalry Division (Airmobile) and the 11th was inactivated again on June 29, 1965.

The return of the 11th Airborne Division includes its designation as the Army’s only Arctic division. “The 11th (Airborne Division) has a great history and heritage that means a lot to Soldiers,” said Army Chief of Staff Gen. James C. McConville in a press release. “Also, we’re looking at the Arctic very differently…We’ve got to be able to operate in that environment. We have to make sure the units have the capabilities, and that gives them the confidence to be special.” Indeed, the 1st BCT is divesting its Strykers in favor of Cold Weather All-Terrain Vehicles. Soldiers of the 11th Airborne Division carry on the storied unit’s shoulder insignia along with their unique Arctic tab worn above their Airborne tab.

Maj. Gen. Brian Eifler took command of the 11th Airborne Division at the 2nd BCT activation ceremony where he addressed the troops. “Today is the dawn of a new history to be written and battles to be won,” he said in his written address. “It will be our sacred honor to uphold the values, grit and proud history of the 11th Airborne Division and our duty to continue this great lineage!”