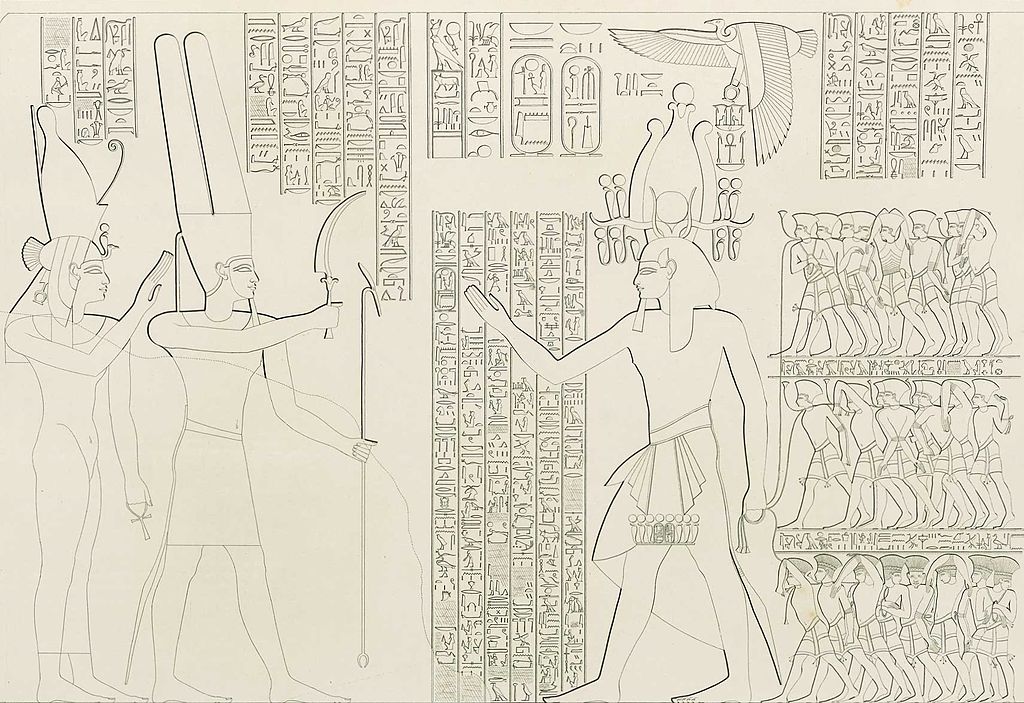 Medinet Habu Second Pylon, showing wide view and a close-up sketch of the left-hand side relief in which Amon, with Mut behind him, extends a sword to Rameses III who is leading three lines of prisoners.

Sea People were groups of hostile seafarers who attacked Syria, eastern Anatolia, Palestine, Egypt and Cyprus near the conclusion of the Bronze Age, particularly in the 13th century. They were primarily accountable for destroying old supremacies like the Hittite Empire. Principal but biased evidence for the Sea People is founded on Egyptian illustrations and texts.

Additionally, extra crucial information stems from Hittite sources and archaeological data. Tribes’ names which consisted of the Sea People, have been mentioned in Egyptian records as the Sherden, Tursha, the Sheklesh, Lukka and Akawasha.

There is no ancient evidence that describes the coalition as Sea Peoples as it is a present-day term initially coined by a French Egyptologist known as Gaston Maspero. Maspero insisted that he gave that term because the ancient reports claim that these tribes originated “from the sea,” devoid of any mention of a particular sea.

It is unknown where the Sea People originated from as there are no civilization or Egyptian records that mention that. The Egyptians grouped them as a confederation of several tribes. There is little information on what initially prompted the Sea People to abandon their homeland, which is unknown, and start raiding other rich lands.

Nevertheless, some historians speculate that either a natural disaster or famine was the reason they originally sailed to other territories. The Sea People could have been kingdoms’ vassals, refugees, or mercenaries running away from food scarcity and climatic change. During the Late Bronze Age, it was prevalent to experience volcanic eruptions and famines, and therefore there may have been a domino outcome.

According to Egyptian sources, several Sea People seem to have originated from Greece, where the Mycenaean civilization failed to prevail. When an extraordinarily sophisticated and thriving economy goes down the drain, numerous city dwellers run away and become refugees. The brave among them adopt arms focusing on pillage and looting. As such, it would not be totally off the chart to conclude that victims of collapsing civilizations joined the Sea People tribes and increasingly grew to attack other empires.

There is significant evidence from Egyptian chronicles that the Pharaohs Ramses II and Ramses III fought great battles against the Sea People. In such wars, the Egyptians, commanded individually by Ramesses III, conquered the Sea People since they were trying to invade Egypt by the sea and land. All the information about that war stems from Ramesses’ III mortuary temple located at Medinet Habu.

It was utterly clear that Ramesses III was defending his country and empire during the Bronze Age collapse. This era was characterized by extensive region-wide droughts, depopulation, destruction of urban centers, and crop catastrophes. Most probably, the lands irrigated by the Nile were still fruitful and would have been a desirable element for Egypt’s counterparts and enemies, especially at that time.

Without a doubt, the Sea People were excellent warriors as they had an outstanding level of organization and military strategy. This excellent structure imposed danger on Egyptians because the Sea People wanted the land since no country had rich soils and access to gold in enormous proportions like Egypt.

Ramesses conquered the Sea People in a naval war off Egypt’s coast. He allowed their warships, cargo, and supply vessels to approach Nile’s mouth. At the same time, the Pharaoh instructed a tiny Egyptian fleet to be positioned in a defensive formation.

Afterward, he waited by the wings for the invaders to attack what appeared to be an irrelevant force before initiating his entire attack upon them from their flanks and sinking their warships. Known as the Battle of Djahy, this successful conquest was a mainland war between the Sea People and Pharaoh Ramesses III, who exterminated a huge proportion of the Sea People.