The 4 fighter jets flown by the Taiwanese Air Force 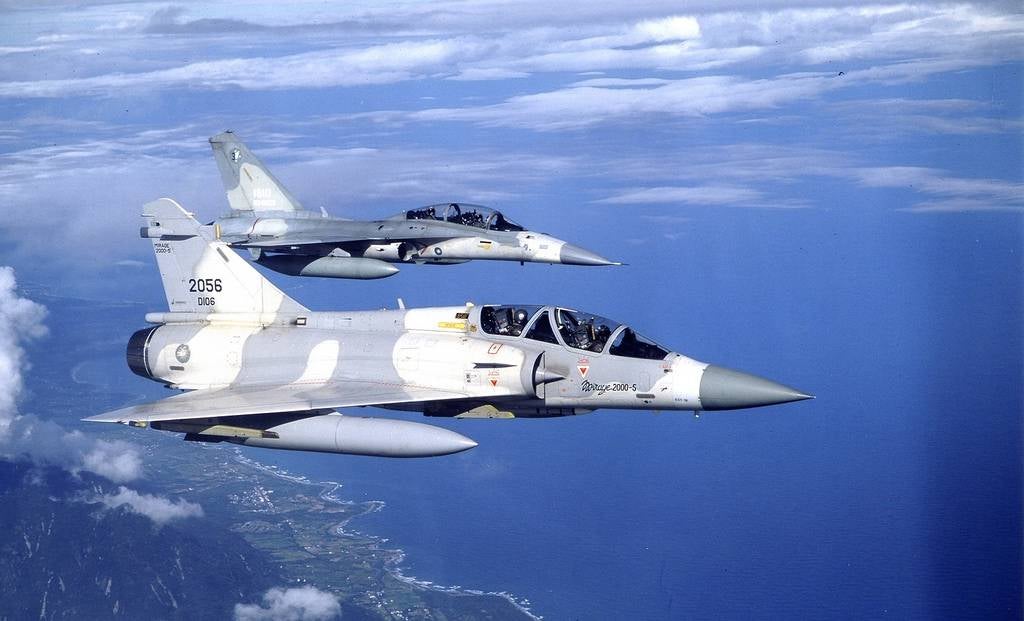 Officially, the military aviation branch of Taiwan is called the Republic of China Air Force. However, to avoid confusion with the People’s Liberation Army Air Force of the People’s Republic of China, it is unofficially referred to as the Taiwanese Air Force or by its acronym. Under constant military threat from the mainland, the ROCAF maintains a comparably small, yet potent fleet of fighter aircraft. These are the four fighter jets flown to defend the airspace above and around Taiwan.

Privately funded and developed by the Northrop Corporation, the F-5 was designed as a light and affordable fighter aircraft. Although it saw service with the U.S. Air Force in Vietnam, the U.S. military primarily uses the F-5 as an adversary aircraft for training purposes. Notably, it is flown by the Navy Fighter Weapons School’s aggressor squadron and stood in for a fictional MiG variant in the original Top Gun. While the F-5’s use by the U.S. military is limited, its low cost makes it a popular export aircraft.

In 1965, the ROCAF received its first nine F-5s, seven A models and two B models, via the U.S. Military Assistance Program. Six years later, the ROCAF had nearly 100 F-5s in total. The U.S. even borrowed some of the ROCAF’s F-5s to loan to the Republic of Vietnam’s Air Force in 1972. The next year, Taiwan’s Aerospace Industrial Development Corporation began domestically producing F-5s under license. During this time, the F-5 was Taiwan’s primary frontline fighter and the ROCAF was the largest operator of the aircraft with 336 in its inventory.

In the mid-1990s, Taiwan began acquiring three newer models of fighter jets, making the F-5 the country’s second line fighter. A few F-5s were converted for reconnaissance missions and training. Interestingly, other F-5s that weren’t scrapped were painted to look like the ROCAF’s new frontline fighters and deployed to major air bases. In April 2022, FlightGlobal reported that ROCAF F-5 inventories numbered just 27 aircraft in service.

Originally built by General Dynamics, the F-16 is the fighter that the U.S. military selected as its primary single-engine multirole aircraft over the F-5. Although the F-16 was initially barred from sale to Taiwan due to an agreement between the U.S. and the PRC, the ROCAF eventually purchased its first 150 F-16A/Bs from the U.S. in 1992. Since then, the ROCAF’s F-16s have received upgrade packages to keep the airframe current with both available technologies and emerging threats.

In 2012, Lockheed Martin, which acquired General Dynamics’ aircraft manufacturing business, unveiled the F-16V variant. The new fighter features upgrades like a new radar, electronics, and cockpit improvements. In 2017, Taiwan began upgrading its existing fleet of F-16s to the new V model. Two years later, the ROCAF formally announced its request to purchase an additional 66 F-16Vs which the Trump administration approved that same year. The F-16 is the ROCAF’s most numerous frontline fighter.

Following the PRC’s acquisition of the Su-27 fighter jet, Taiwan purchased 60 Mirage 2000s, 48 fighters and 12 trainers, in 1992. The Taiwanese order of French aircraft was protested by the PRC, but the $4.9 billion deal went through. Fast and equipped with intermediate-range air-to-air missiles, the ROCAF employed the Mirage as its primary intercept aircraft.

However, the Mirage suffered from low operational readiness and high maintenance costs. A harsh environment and high operational tempo led to accelerated degradation of the aircraft. Dassault worked to fix the Mirages sold to the ROCAF and brought the fighters back up to a combat ready status. However, the Mirage cost more for the ROCAF to maintain than either the F-5 or F-16. In 2009, Taiwan even considered mothballing its entire fleet of Mirages. Although it is popular with ROCAF fighter pilots, Taiwan has no plans to upgrade its Mirage fleet.

As Taiwan’s fleet of F-5s began to show their age, the country initiated the Indigenous Defense Fighter program. The job of designing and building a Taiwanese fighter was given to the aforementioned AIDC that previously produced F-5s domestically. Work began on the IDF in 1980, but was greatly accelerated two years later when the U.S., under pressure from the PRC, refused to sell additional fighter aircraft to Taiwan. However, U.S. technology and assistance was given to Taiwan’s defense industry, including the IDF program.

Interestingly, the acquisition of the aforementioned F-16 and Mirage fighters slowed the IDF program. Named after Chiang Ching-kuo, the late President of the Republic of China and son of former president Chiang Kai-shek, the F-CK-1 first flew in 1989 and entered ROCAF service three years later. By 1999, all 130 production aircraft were built.

Developed with assistance from western companies like General Dynamics and BAE, the F-CK-1 is a single-engine multirole fighter capable of both ground attack and air-to-air combat like the F-16 and Mirage. In 2001, Taiwan announced a plan to upgrade the F-CK-1A/B to the F-CK-1C/D. The upgrades extended the aircraft’s range with larger fuel tanks and improved its lethality with a new avionics suite, radar, and weapons systems. Upgrades to all F-CK-1s were completed in 2018.