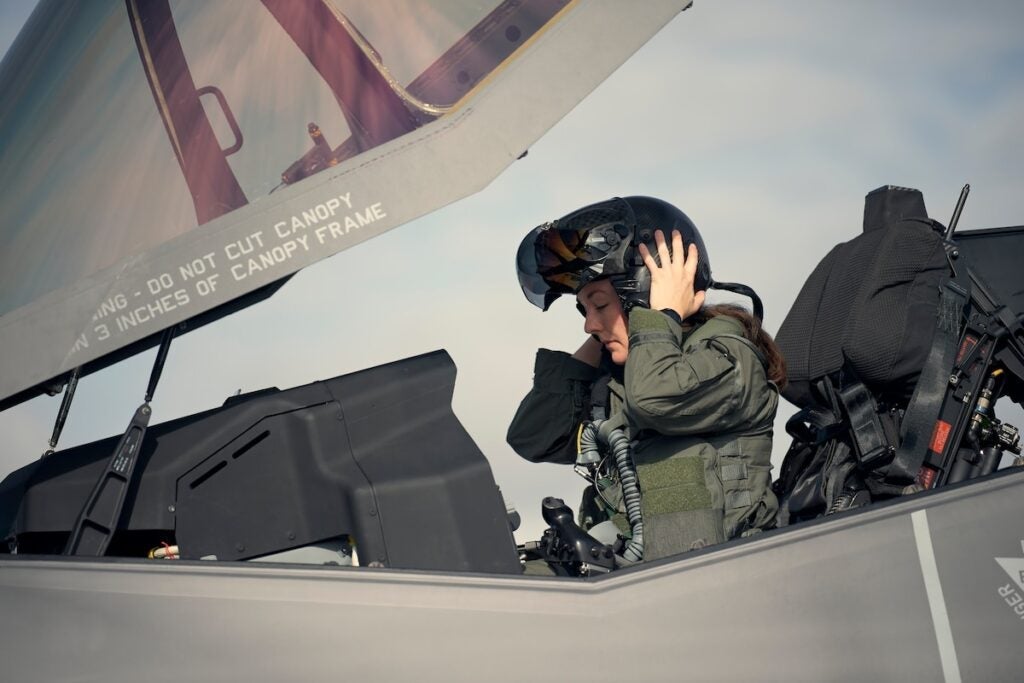 In 2019, the 158th Fighter Wing of the Vermont Air National Guard made history as the first Guard wing to receive the F-35A Lightning II stealth fighter. On September 7, 2022, the wing again made history when 1st Lt. Kelsey Flannery made her inaugural flight as the Air Guard’s first female F-35 pilot.

Previously a kickboxing instructor from Kentucky, Flannery went through a rigorous process to join the Guard’s only fifth-generation fighter wing. “I saw that they were having interviews. I was really interested in a fighter slot, and Vermont is just beautiful,” she said in a 158th Fighter Wing news story. “I was really excited, and I was lucky enough to get a pilot slot with them.”

After interviewing with the 134th Fighter Squadron, 158th Fighter Wing, Flannery was selected out of hundreds of applicants to fly the F-35. She attended the Air Force’s Officer Training School and earned her commission as a 2nd Lieutenant. Already a licensed pilot, Flannery was able to go directly to undergraduate pilot training where she flew the T-6 and T-38 trainer aircraft. After completing Intro to Fighter Fundamentals and Survival, Evasion, Resistance and Escape school, it was time for her to train on the F-35.

Also known as the B-course, the nine-month school teaches pilots how to fly the advanced fifth-generation fighter. The training is only for the best pilots since the F-35 doesn’t have a two-seat variant for a student to fly with an instructor. “We felt really prepared, the instructors were awesome and the simulators help prepare you very well,” Flannery said of her training. “I guess the only thing you’re experiencing for the first time is the feeling of actually being in the jet, but you’re already exposed how to work through all the problems and you have a lot of experience up there with you with your flight lead.”

As the daughter of an Air Force pilot, Flannery always wanted to become a military pilot herself, finding the fighter community to be the best fit. “I really wanted to be on the leading edge. I liked the focus it required and I liked the community a lot,” she said. “It’s exciting to get up there, go fast and be able to employ weapons, so that was one of the more appealing parts of it.” Moreover, while she’s made history as the Guard’s first female F-35 pilot, she and her fellow pilots remain focused on their mission to fly, fight and win. “There’s definitely been a trail blazed already and I’m really grateful to the women who have done that, but nobody has brought it up and I feel very much like an equal here,” Flannery noted. “People just treat me like a wingman and it’s great as it allows me to focus more on flying.”