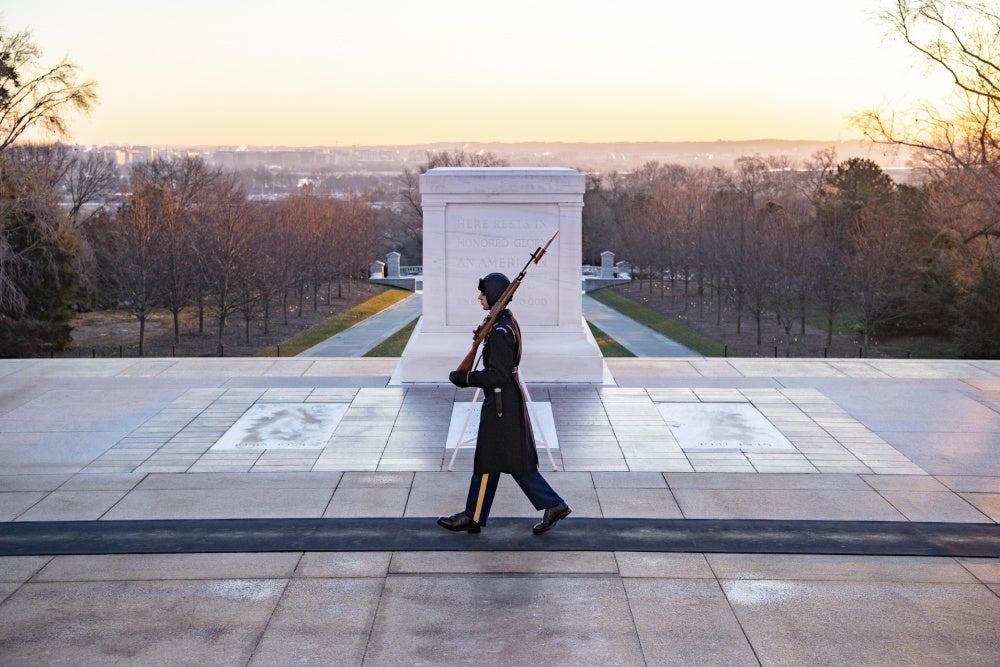 It doesn’t matter if the sun is shining, if a hurricane is passing through Washington, DC or if a Tomb Guard accidentally gets stabbed in the foot. There will always be an American soldier of the highest caliber “walking the mat” at the Tomb of the Unknown Soldier. For 24 hours a day, seven days a week since 1937 there has always been a guard on watch.

Stationed at Arlington National Cemetery’s most popular tourist attraction, the Tomb Sentinels have the hardest and most coveted job in the entire U.S. Army. No other special assignment has such strict standards, and for good reason.

But there is a lot that goes into being the most visible symbol of America’s dedication and honor for its fallen heroes that the public may not know about.

1. They don’t wear rank insignia for a reason

Unlike every American soldier, sailor, airman or Marine, the guards at the Tomb of the Unknown Soldier do not wear rank insignia on their coats when guarding the tomb. Since the fallen inside the tomb are unknown, and no one knows what rank they actually were, Tomb Guards don’t wear visible rank so they don’t outrank who they might be guarding.

Only when the relief commanders come out to change the guard, do they wear an NCO’s rank. Their actual rank is separate from the uniform they wear while on duty at the tomb.

2. The Tomb Guard Badge is the 3rd least awarded badge in the Army

In third place behind the Military Horseman Identification Badge and the Astronaut Badge, acquiring the Tomb of the Unknown Soldier Guard Identification Badge is not just rare, it’s incredibly difficult. Only 20% of applicants are accepted for training and the washout rate is astronomical.

This is not just a lifestyle in the way that the Army life is a different way of life. When serving as a Tomb Guard, the job becomes your life for 18 months. The average sentinel take 8 hours to prepare everything required to go on duty for his next and that shift is a 24-hour shift.

4. Being on duty means the world’s strictest schedule

Tomb Sentinels stand two-hour watches in 24 hour shifts. In that time, they will repeatedly count to 21, which is representative of the 21-gun salute, the highest military honor given. The guard’s motions are a seven step process.

5. The weapons and the gloves used to handle them are special

The gloves worn by Tomb Sentinels are usually wet to give them better control of the rifle in their hand as they switch it from shoulder to shoulder. Their weapons are special versions of whatever infantry rifle is standard issue at the time they’re posted, with ceremonial stocks. Currently, they use a fully functional but unloaded and well-cleaned M-14.

Non-commissioned officers wear a special sidearm during the Changing of the guard ceremony. The pistol is also whatever is standard-issue for the Army, but Sig-Sauer, the company that makes the Army’s standard-issue sidearm, created four special pistols just for the Old Guard, which includes wood from a ship that served in the Spanish-American War.

Read: These pistols are carried by NCOs at the Tomb of the Unknowns

6. The guards aren’t there for show

The Army originally placed guards at the Tomb of the Unknown to deter picnickers from having lunch on top of the hallowed gravesite. In the years that followed, the threat to the tomb became greater than having a good view during lunch and guards are posted to keep people from defacing or touching the monument. or even failing to show proper respect.

These are not the Buckingham Palace guards, and they will take steps to deter any encroachment on the tomb, by any means necessary.