What are the differences between the 4 levels of aircraft supersonic speeds? - We Are The Mighty

What are the differences between the 4 levels of aircraft supersonic speeds? 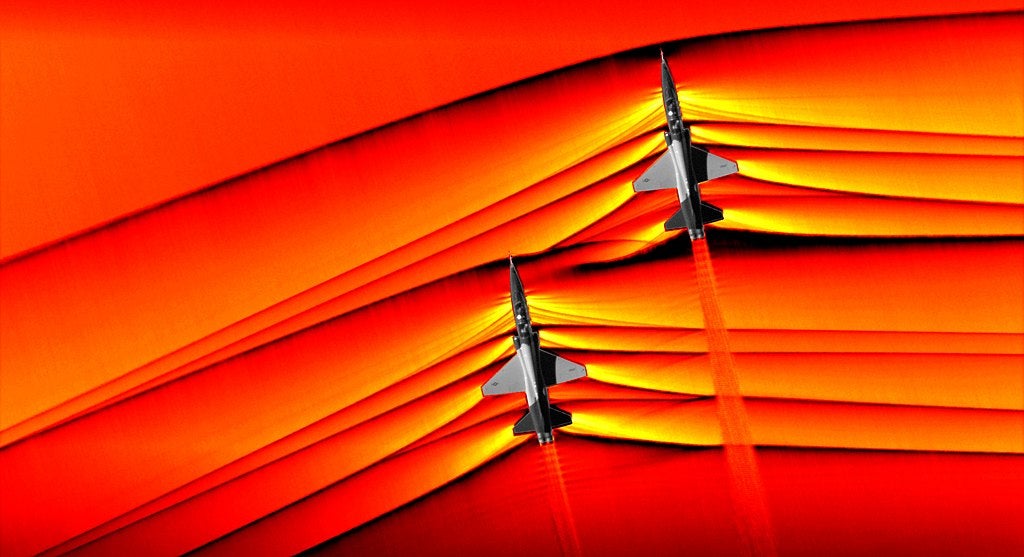 The interaction of shock waves from two supersonic aircraft, photographed for the first time by NASA using the Schlieren method in 2019.

Technology has made it possible to travel at very high speed using special aircrafts, something people from medieval times would have never imagined. While traveling at supersonic speed may be terrifying, it seems satisfying. Imagine arriving at your destination several hours earlier than you are used to. Typically, different aircraft have different speeds, similar to the case with vehicles. The speeds are influenced by different factors, including the shape and size of the aircraft. An aircraft’s speed is determined by its Mach number, which is comparable to sound’s speed. Four main classifications elucidate a flight’s speed, and each is comparable to a Mach number.

An aircraft transiting at this pace is moving moderately slower than the velocity of sound, which is less than Mach 0.8. The average speed of sound is proven to be Mach 1, so the difference between the two is 0.2. However, this speed is quite fast when you think about it, even slightly lower than sound. Subsonic aircraft include all slow-flying airplanes, including general aviation planes like ultralights and paragliders.

Passenger airliners, like the Boeing 777 and Airbus 330, as well as tinier international flights with fewer than 100 seats, are all subsonic. The majority of older warcraft jets are also subsonic. The aircraft’s subsonic speed was developed in the 1950s when the US Air Force invented the Super Sabre aircraft. Even though fast speeds are generally admirable in an aircraft, higher velocity necessitates much larger engines, more gasoline and more sophisticated technical materials than low-velocity flights. As a result, a subsonic aircraft is less expensive, has a greater range and causes less environmental damage.

According to aeronautics, transonic speed is one that influences a range of speeds of airflow surrounding and moving past the aircraft. This speed can be just above Mach 1 or just below, usually from 0.8 to 1.2. Transonic speed depends on a number of factors, the main one being the aircraft’s speed. Additionally, the airflow temperature in the craft can also determine the transonic speed range.

Sometimes, the range of these speeds can fall under supersonic, although a significant fraction of the velocity would suggest otherwise. Most transonic aircraft are designed to function at transonic airspeeds as these foresee a rapid increase in drag. As the aircraft goes through the sound barrier created, transonic clouds will be seen around the craft.

Because the temperature and structure of the air change dramatically with elevation, the speed of sound and Mach numbers for gradually moving gadgets may vary. Advanced firearm bullets are an example of supersonic objects. Many spacecraft are also supersonic during segments of their atmospheric entry, though low air viscosities mitigate the impacts on the spacecraft.

An aircraft can be categorized as hypersonic if it specifically transmits at speed above Mach 5. The particular Mach number is not determined, as it can vary depending on factors such as air temperature and speed. At hypersonic speeds, air disconnection becomes substantial, resulting in high thermal loads. The common types of hypersonic objects include cruise missiles, which travel five times faster than sound. More hypersonic objects are expected in the future as many nations are making it a priority.