The top aviation museums in America - We Are The Mighty

The top aviation museums in America 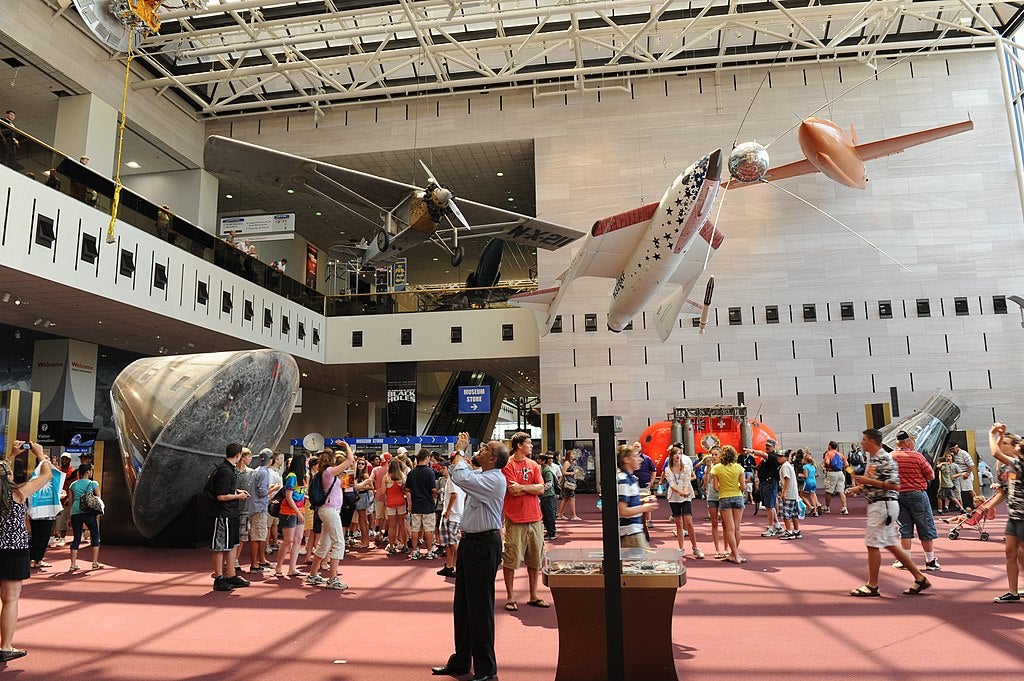 The Milestones of Flight entrance hall of the National Air and Space Museum in Washington, DC.

America’s rich aviation history is undeniable. The first airplane ever flown came from the U.S., and the first moonwalk was an American as well. It’s no wonder the country is full of museums dedicated to our quest to tame the skies. If you’re not already interested in the science and history of flight, these seven museums could easily change your mind.

Here are the top 7 aviation museums in America

Museums in the National Capital Region

The Smithsonian National Air and Space Museum is a must-visit if you’re in DC. On display are several of the most famous planes in history, including the Wright Brothers’ 1903 Flyer and Charles Lindbergh’s Spirit of St. Louis. There’s an exhibit dedicated solely to the advent of flight, space capsules, and so much more.

A branch of the National Air and Space Museum located in Virginia, the Steven F. Udvar-Hazy Center houses several notorious artifacts from air and space history. Here, you’ll get to feast your eyes on the Space Shuttle Discovery, the WWII bomber Enola Gay, a Blackbird plane, and more.

The Intrepid Sea, Air & Space Museum is located on the Hudson River in New York City. Along the edge of the river, the museum showcases military vessels from sky, space, and sea, including a real space shuttle and aircraft carrier. The interactive elements of this museum add some fun into the mix, too.

National Museum of the Air Force

It’s no surprise the largest military aviation museum in the world is on Wright-Patterson Air Force Base. That’s because the Wright brothers hailed from the Buckeye State. The National Museum of the Air Force is absolutely amazing. Get ready for jaw-dropping displays and a detailed history when you visit here. There are over 350 aerospace vehicles and missiles to gawk at, not to mention thousands more artifacts from military history.

Speaking of Ohio, if you’re heading to Wright-Patterson AFB for your next PCS, be sure to check out our complete base guide!

With a special focus on air travel, the Strategic Air Command & Aerospace Museum provides an extensive history of airplanes. Immerse yourself in the history of airplanes and walk through an elaborate WWII exhibit. Without a doubt, you will exit this museum nearly an expert on air travel. On top of all that, you’ll even have the chance to step inside historic aircraft.

About an hour from Orlando, the Kennedy Space Center Visitor Complex is more than a standard museum. It is part of a world-famous active space station. This means if you plan your trip correctly, you’ll get to witness a rocket launch with your very own eyes. The visitor complex itself includes some pretty unique elements, like a shuttle launch simulator and even the chance to meet some astronauts.

The Seattle area is home to the Boeing Future of Flight Museum, where you can watch as professionals build commercial jets in real-time. The museum resides inside the largest building in the world, so its impressive display of massive airplanes should come as no surprise. And if all that wasn’t enough to get airplane enthusiasts in its doors, you can also design your own dream airplane while you’re here.

Prefer to check out museums from the comfort of your own home? Here are some virtual tours to explore!