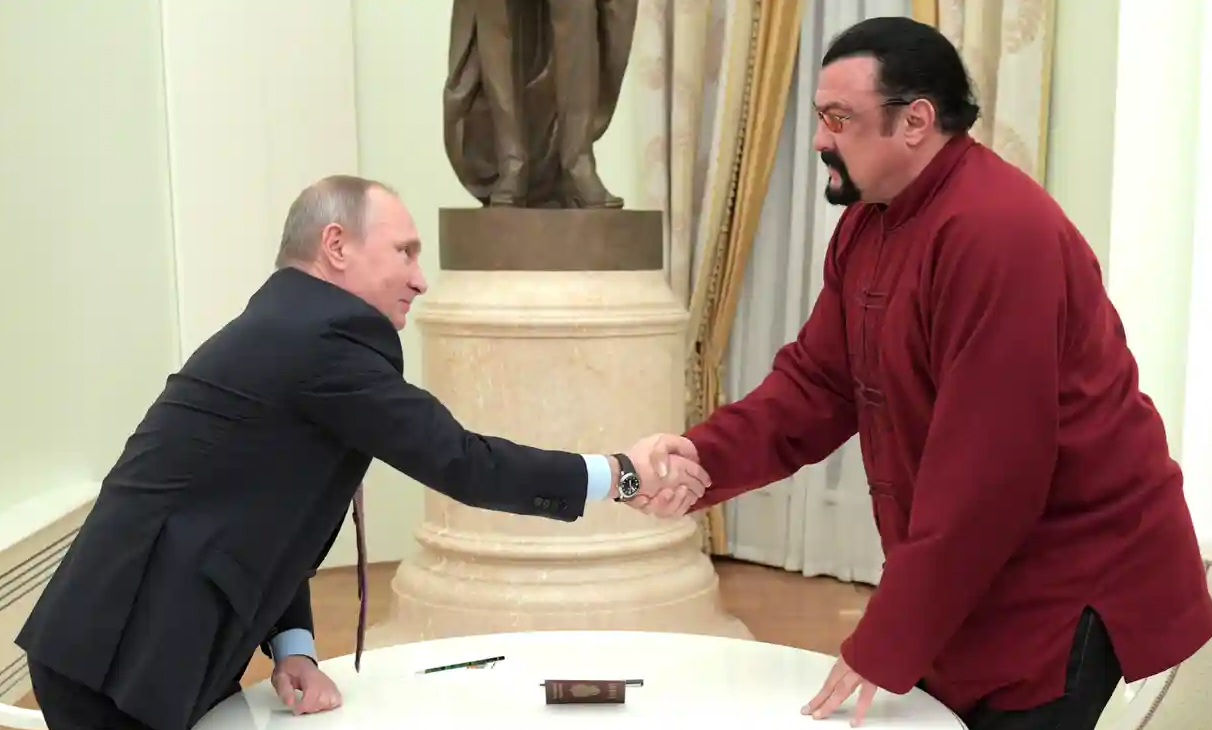 When you stop and think about it, Steven Seagal and Vladimir Putin have a lot in common. They are both larger than life, they both have a love of martial arts, and anything you hear about them may or may not be true. They have so many fantastical things about them that completely check out, it’s hard – if not impossible – to filter out rumors from real-life events. For instance, a string of interesting rumors surround Putin. As for Seagal, after soaring in blockbusters through the 90s, he’s since become a Reserve Deputy in Louisiana; there is a real-life chance he could arrest you. (All the more reason not to act out in LA).

They are a pair made for each other.

That’s why it comes as no surprise – perhaps confusion, but no surprise – that Russian President Vladimir Putin and American actor and screenwriter Steven Seagal are friends. They’re allegedly GOOD friends. A quick Google search will bring up hundreds of pictures of the pair together in various situations, often in a handshake or embrace.

But how did we get here? How did this unlikely pair become close? And how have they remained friends over the years?

The history of their friendship began when they met at an after-party and hit it off. Seagal was hired by a Russian company known for booking U.S. celebs and asked him to make an appearance, play music, and shake hands.

The duo met and became fast friends, keeping in touch for the next two years.

Then in 2016, Putin gave Seagal a Russian passport, making Seagal an official Russian citizen. In addition, Seagal has gone to bat for Putin multiple times, including when he was accused of meddling in U.S. elections.

Seagal said, “For anyone who thinks that Putin had anything to do with fixing the election, or even that the Russians have that type of technology, is stupid.”

Of Putin, he has also said he is “one of the great living world leaders” and named him as being “like a brother.”

In 2018, Russia named Seagal as an official representative (unpaid) to help strengthen cultural relationships and PR efforts. He also joined as an official member of the pro-Putin political party, A Just Russia — Patriots — For Truth.

Putin also requested that Seagal serve as his political liaison with the US, but the Biden Administration denied the request.

Outsiders say that the relationship is beneficial for both – Seagal can rebrand himself in Russia, while Putin can gain clout from being close to a US celebrity. (It’s a tactic that Russia has done with several celebs, just none as closely as Seagal.)

However, as their friendship grew closer, the pair continued to benefit from one another. While Seagal has become popular in Russia, Putin has used Seagal’s comments that back him politically. So much so, that Seagal was banned from Ukraine in 2016 after speaking in support of the invasion of Crimea.

Seagal has yet to speak publicly about the Ukraine invasion, except in a statement in which he said he hoped it could end peacefully.