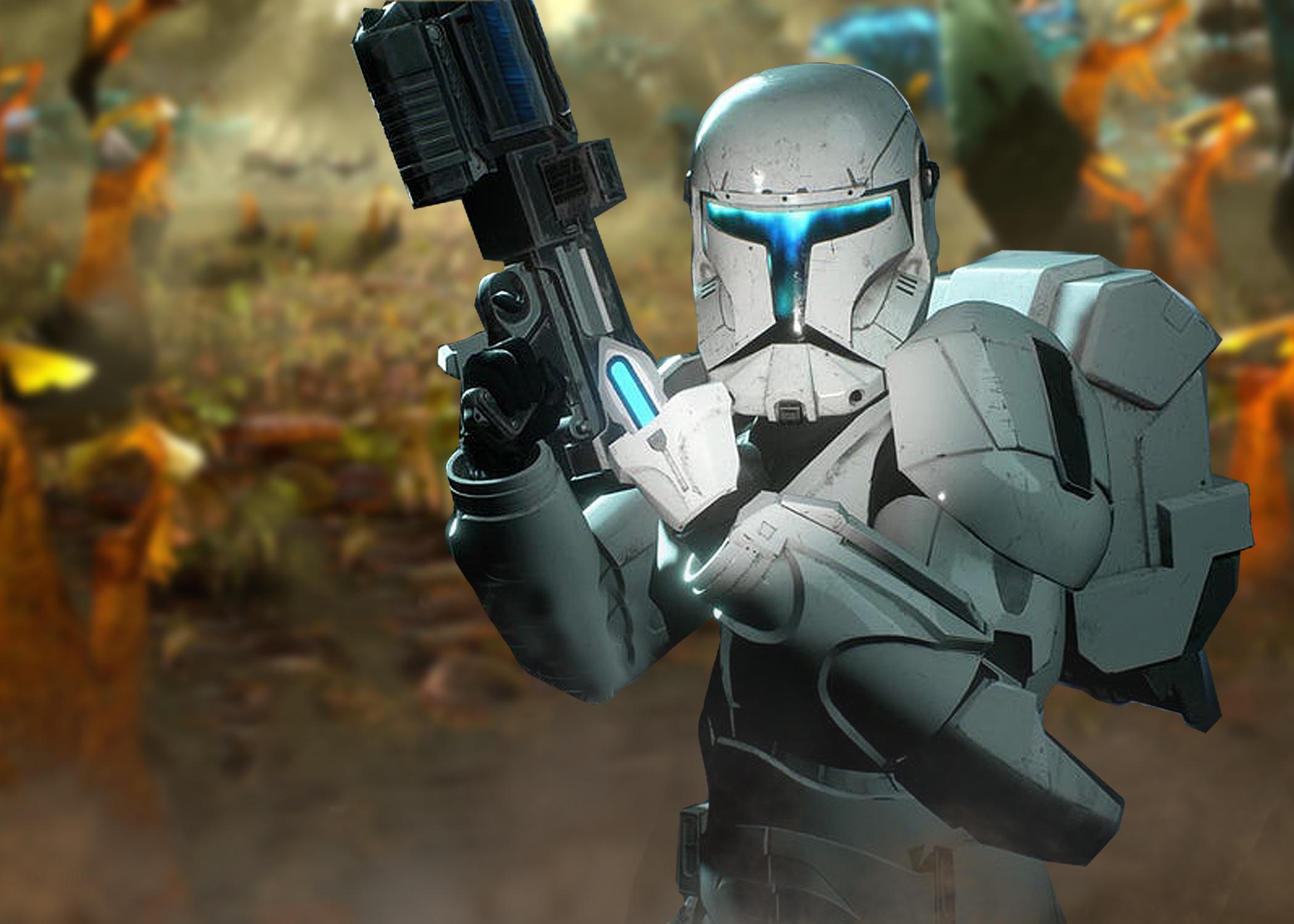 Star Wars Republic Commando is often lauded as one of the best Star Wars video games of all time. It’s up there with the likes of Battlefront II (the 2005 version), Empire at War, and X-Wing. Developed and published by LucasArts for the Xbox and PC, Republic Commando put players in command of an elite squad of clone commandos. Using specialized skills and equipment, the commandos were tasked with special missions far beyond the capabilities of the average clone trooper and even the highly-skilled ARC troopers. With the game’s ported re-release for PlayStation 4 and Nintendo Switch, and the expansion of the clone commando lore since the game’s 2005 initial release, let’s take a look at what makes clone commandos so unique and deadly.

Like all clones, commandos were based on the genetic template of the legendary bounty hunter, Jango Fett. However, unlike their rank and file brothers, the commandos were genetically engineered to be stronger, smarter, and deadlier while still remaining highly obedient to their Kaminoan cloners and Jedi commanders. This made them adept to the specialized training regimen that they were put through.

The water planet of Kamino is home to the aiwhas, winged whale-like creatures who hunted in pods. The Kaminoan cloners modeled the commando squad structure after the aiwhas, grouping them into squads of four and training them together from birth. They ate, slept, and trained together to think of themselves as part of a unit rather than an individual. Whereas standard clones were trained extensively with simulators to save on costs, commandos were more often trained with live fire to familiarize them with battlefield conditions.

Moreover, the commandos were trained by a group of 100 warriors, 75 of whom were Mandalorians, hand-picked by Jango Fett. Known as the Cuy’val Dar, “those who no longer exist” in the Mandalorian language, these warriors discarded their old lives to train the commandos in secret. This was necessary to hide the creation of the clone army from the rest of the galaxy.

With their enhanced genetics and Cuy’val Dar instructors, the commandos were trained on just about every weapon, vehicle, and piece of gear in the Republic arsenal. Their Katarn-class armor was expensive, extremely lightweight, and beat only by pure Mandalorian beskar in terms of strength. Commandos were exclusively armed with the DC-17m Interchangeable Weapon System which they could configure for the specific job at hand.

While every commando was cross-trained in combat disciplines, the members of a squad specialized in their respective roles like marksman, demolitions expert, tech specialist, and squad leader. Their helmets integrated with each other so that every commando knew the location and status of the others at all times. Operating as a team, commandos could take on nearly every mission that the Republic had for them.

Clone commandos were organized under the Grand Army of the Republic’s Special Operations Brigade. This was the GAR’s version of USSOCOM in the U.S. military. The aforementioned ARC troopers also fell under the Special Operations Brigade. Operating at the edge of what the Republic deemed morally acceptable, the commandos were tasked direct action, sabotage, and even assassination missions. With Jedi strike teams stretched thin during the Clone War, commando teams were often sent instead and were very successful. However, when used in conventional large-scale combat like at the first battle of Geonosis, the commandos were unable to use their skills to their advantage and suffered high casualties.

Without spoiling Republic Commando for gamers who have yet to play it, the game’s story follows Delta Squad. These four commandos can be seen in the Star Wars: The Clone Wars animated series. Following the attack on the Temple of Eedit by Savage Opress, Delta Squad is dispatched directly by the Jedi Council to recover the bodies of slain Jedi Master Halsey and his Padawan Knox. The fact that the council did not know what sort of threat had attacked the temple and killed a Jedi Master speaks volumes to the skills and abilities of the commandos and the confidence that their commanders had in them.

Following Order 66 and the rise of the Empire, some commandos ignored the order and defected from the army. Those that did often became bounty hunters. However, most commandos remained loyal to the Empire because of their genetic programming. They were reorganized as a special division of the 501st Legion and placed under the direct command of Darth Vader. These Imperial Commando teams were often tasked with hunting down enemies of the Empire, especially fugitive Jedi.

Commandos were some of the deadliest clones fielded by the GAR. With the expansion of the Star Wars universe, their popularity has grown thanks to the Clone Wars show and the Battlefront video game. If you didn’t have an Xbox or gaming PC and avoided watching playthroughs online, your chance to experience Republic Commando for yourself has come. The game’s enhanced port is set to release on PlayStation 4 and Nintendo Switch on April 6, 2021.