Last WWII Medal of Honor recipient, Hershel 'Woody' Williams, passes away at 98 - We Are The Mighty 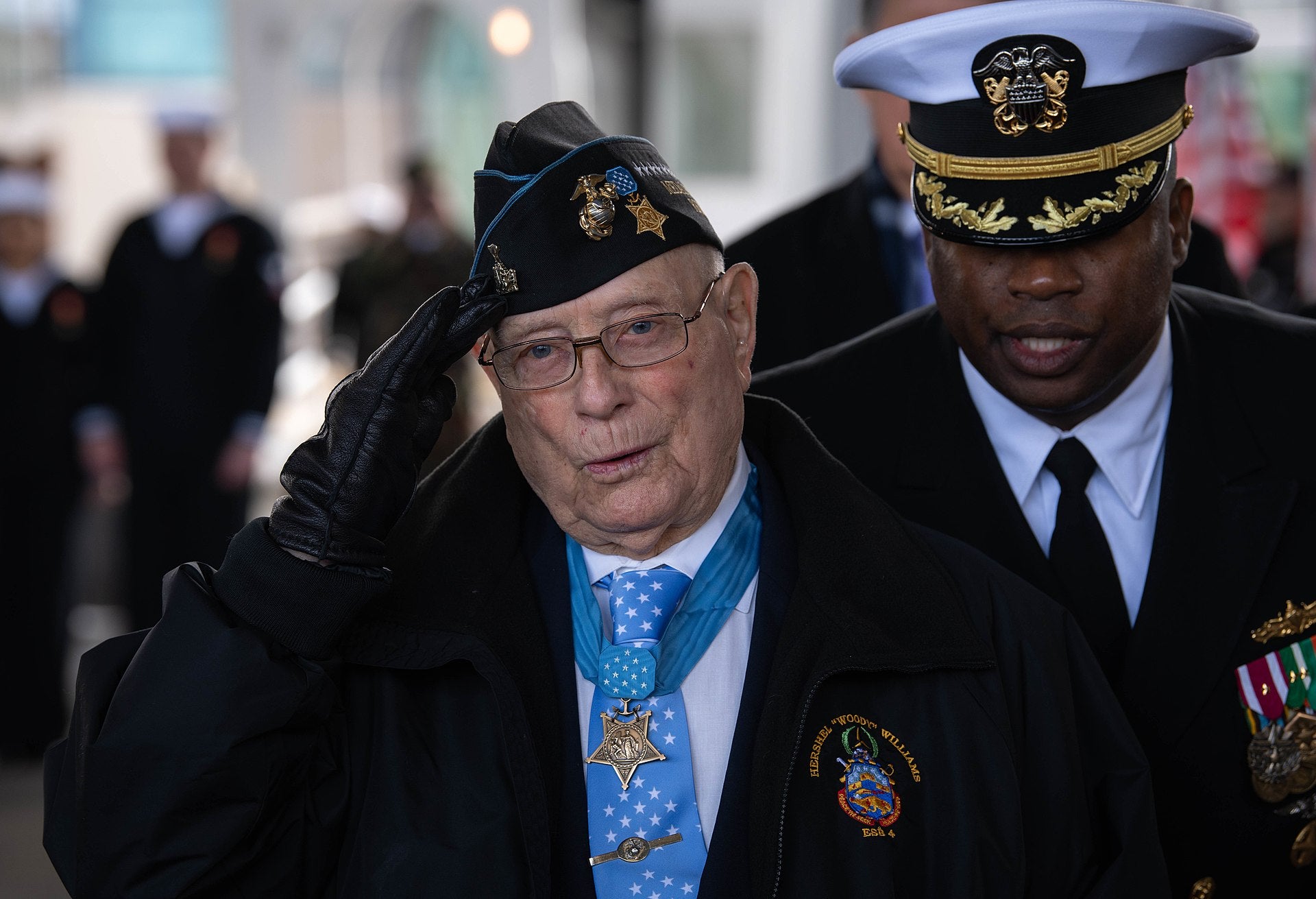 Hershel Woodrow Williams, Retired Chief Warrant Officer Four and Medal of Honor recipient, salutes as he is introduced to the stage along with other members of the ship commissioning committee, March 7, 2020 in Norfolk, VA...The ship commissioning ceremony continues a tradition three centuries old, observed by navies around the world and by our own Navy since December 1775, when “Alfred”, the first ship of the Continental Navy, was commissioned at Philadelphia. (U.S. Marine Corps Photo by Lance Cpl. Fernando Moreno).

Hershel Woodrow “Woody” Williams was awarded the Medal of Honor for actions on Iwo Jima during WWII. More notably, Williams was the last surviving Medal of Honor recipient of WWII. On June 29, 2022, Williams, one of the greatest of the Greatest Generation, passed away at the age of 98.

On October 2, 1923, Williams was born on a dairy farm in Quiet Dell, West Virginia. Weighing just 3.5 pounds, he was not expected to survive; an expectation that Williams would defy during the war. After Pearl Harbor was attacked, Williams went to enlist in the Marine Corps. However, at 5′ 6″, he was told he was too short to serve. The regulation changed in 1943, and Williams enlisted in the Marine Corps Reserve on May 26.

Williams attended boot camp at Marine Corps Recruit Depot San Diego. Afterwards, on August 21, 1943, he was sent to Camp Elliott, San Diego where he joined the tank training battalion. The next month, Williams was transferred to the infantry training battalion to become a flamethrower demo man. This was essentially a death sentence, with the average life expectancy of a Marine flamethrower on Iwo Jima being just five minutes.

By December 1943, Williams completed training and was sent to the South Pacific and was assigned to Company C, 1st Battalion, 21st Marine Regiment, 3rd Marine Division at Guadalcanal. In July and August 1944, he saw action during the Battle of Guam with the Headquarters Company. Williams rejoined Company C in October for his next and final campaign.

On February 21, 1945, Williams the rest of his unit landed at Iwo Jima. Two days later, Williams and his company were supporting a column of tanks when they encountered a network of Japanese pillboxes. Williams’ Medal of Honor citation reads:

Cpl. Williams daringly went forward alone to attempt the reduction of devastating machine-gun fire from the unyielding positions. Covered only by four riflemen, he fought desperately for four hours under terrific enemy small-arms fire and repeatedly returned to his own lines to prepare demolition charges and obtain serviced flamethrowers, struggling back, frequently to the rear of hostile emplacements, to wipe out one position after another. On one occasion, he courageously mounted a pillbox to insert the nozzle of his flamethrower through the air vent, killing the occupants, and silencing the gun; on another he grimly charged enemy riflemen who attempted to stop him with bayonets and destroyed them with a burst of flame from his weapon.

That same day, February 23, was the day of the iconic flag-raising on Mount Suribachi. About 1,000 yards from the volcano, Williams witnessed the historic event. He went on to fight the remainder of the five-week battle, despite being wounded in the leg by shrapnel on March 6. Williams returned to the U.S. in September. On October 5, 1945, he and 13 other servicemen were presented with the Medal of Honor at the White House by President Truman.

On October 20, 1954, Williams joined the Organized Marine Reserve. In 1957, he joined the 25th Infantry Company at Huntington, West Virginia and eventually became the unit’s interim CO as a warrant officer on June 6, 1960. Williams rose to the rank of Chief Warrant Officer 4 in the Marine Corps Reserve. Although he didn’t technically qualify, he retired in 1969 after 17 years of service.

After the war, Williams worked as a Veterans Affairs counselor for 33 years. He struggled with the effects of combat stress until 1962 when he had a religious renewal. After this, Williams served as the Congressional Medal of Honor Society’s chaplain for 35 years. The Pritzker Military Museum & Library’s Medal of Honor exhibit is made up largely of items donated by Williams, including his Medal of Honor.