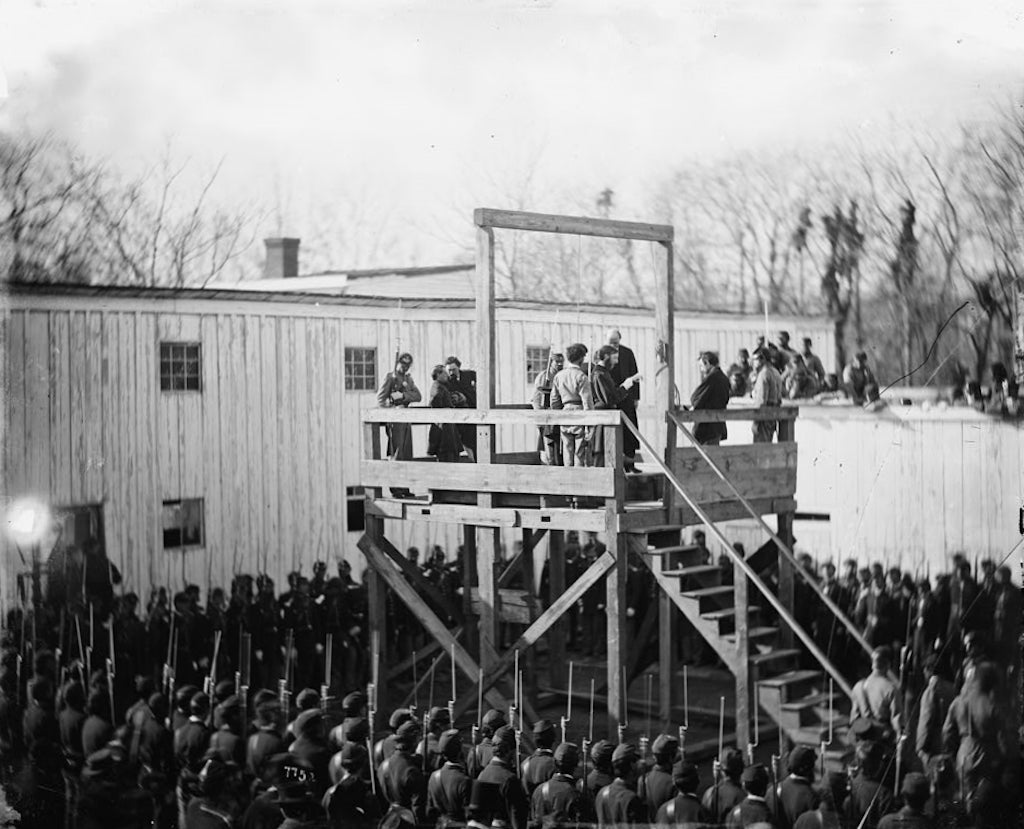 The execution of Henry Wirz, commandant of the (Confederate) Andersonville Prison, near the US Capitol moments after the trap door was sprung.

Henry Wirz and Samuel “Champ” Ferguson could not have less in common. They both served the Confederacy during the U.S. Civil War, but they have different origin stories, different lives, and their roles of support for the Confederate States of America are entirely different.

The other common thread between them is that they were the only two people convicted of  war crimes committed during the war. They were also both hanged by the Union Army in 1865.

Henry Wirz was actually born Hartmann Heinrich Wirz in Zurich, Switzerland. He was an educated young man who wanted to be a doctor, but his family couldn’t afford his education. Instead he became a merchant. When he was caught embezzling from a business in 1848, he was sent into exile in the United States, where he was finally able to become a kind of physician in the American South.

He enlisted in the Louisiana Infantry in 1861, but an injury, potentially from the Battle of Seven Pines in 1862, kept him away from the fighting. He was promoted to Captain for bravery in combat and assigned to oversee Confederate prisoner of war camps. His first posting was in Alabama, but he was transferred to Camp Sumter, but became known by the now infamous-name of Andersonville.

The Andersonville POW camp suffered from the same problems that plagued most of the Confederacy. It was underfunded and didn’t have enough supplies. The camp itself was never fully built, despite the massive influx of Union prisoners it was expected to hold. The prisoners suffered from disease, hunger, poor sanitation, medical supplies and even water.

For 14 months the 45,000 former troops suffered from ill health, constant harassment, and even armed gangs of fellow prisoners that Wirz and the Confederates did little to relieve. An estimated 13,000 prisoners died in Andersonville, 28 percent of those who were sent there.

Wirz was captured in May 1865 at Andersonville and sent to Washington. There, he was put on trial for conspiracy. The Federal government alleged that Wirz systematically planned to kill off as many Union soldiers as possible. The government also alleged that Wirz engaged in “acts of personal cruelty” toward his captives. He was tried by a military commission and found guilty of almost all charges.

He was hanged on Nov. 10, 1865 at the Old Capitol Prison in Washington, DC in front of 200 spectators. His neck wasn’t broken in the fall from the gallows, and he died from slow strangulation.

Just two years older than Wirz, Champ Ferguson was raised in Clinton County, Kentucky. He was uneducated and raised to become a farmer like his father. But Ferguson was a violent troublemaker from a young age. After killing the local constable, the townspeople came after Ferguson. He escaped by stabbing his way out of a mob and fleeing to Tennessee.

He was living there with his family when Tennessee seceded from the Union. In 1862, East Tennessee was occupied by Union troops and sentiments on both sides ran high. Ferguson chose to side with the Confederacy and became a guerrilla fighter, like many in the region. The difference was that Ferguson attacked civilians who were Union sympathizers.

Ferguson was ruthless and diabolical in his methods. He killed the elderly as they slept, often beheaded his victims and was even charged by the Confederacy with the murder of government officials. When the war ended, he and his men went home. But when Ferguson returned, Union troops were waiting for him.

He was captured and put on trial for 53 counts of murder, specifically the murders of wounded Black soldiers and their white officers who were still in bed, recovering from wounds. In Oct. 1865, he was sentenced to death by hanging, a sentence carried out ten days later.