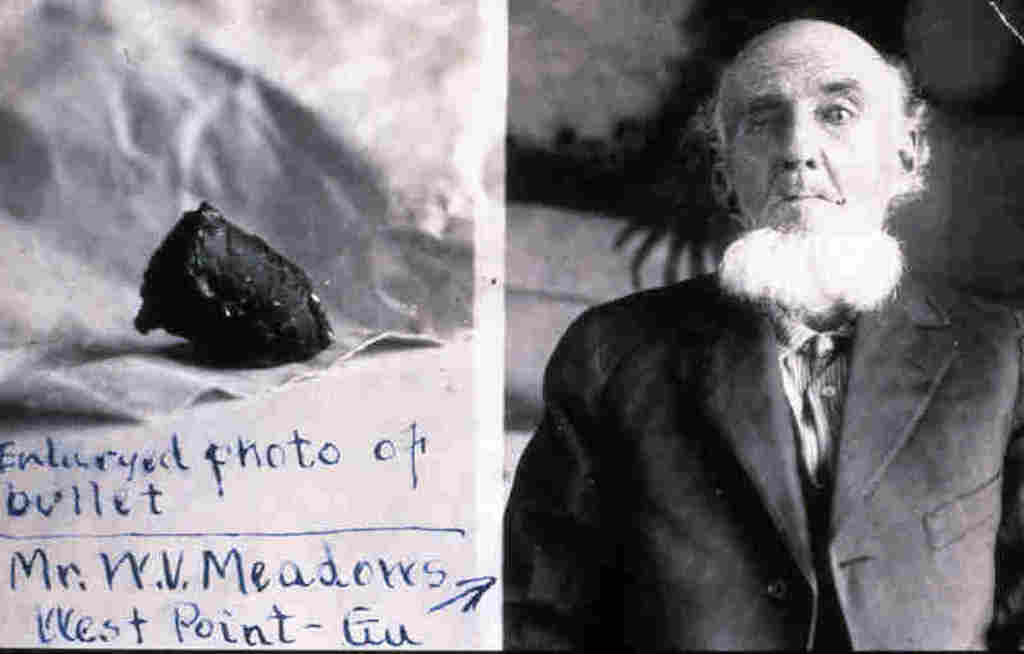 Civil War weapons were known to cause massive amounts of damage to the human body. Large caliber arms could shatter bones, force amputations, and end a soldier’s life in the most gruesome ways possible. It’s no surprise that so many men died in combat during the war, and so many more lost limbs to wounds that might today be treatable.

Knowing this, it’s easy to understand the shock and awe of seeing the enemy you shot in the eye and learning he was alive decades later.

In 1921, Union Army veteran Peter Knapp read a sensational newspaper story about a man who appeared to be choking. The story ended with the man coughing up a one ounce bullet that had struck him while he was a Confederate sniper stationed at Vicksburg near the Mississippi River. Knapp knew immediately that the bullet came from his rifle.

Knapp was a rifleman with the 5th Iowa Volunteer Infantry during the Civil War. He was 21 years old when he and two fellow soldiers were out on patrol, looking for Rebel snipers as the Union Army marched through the South. On this patrol, he spotted Willis Meadows of the 37th Alabama Volunteer Infantry.

When Knapp took aim and fired at Meadows, he hit the Confederate sharpshooter in his right eye. He saw the hit, assumed the sniper was dead, and continued on with his patrol. But Meadows wasn’t dead. He was found and taken to a Union hospital, where doctors struggled to find the bullet. As a wounded soldier, he was paroled and sent to a Confederate hospital, where he ended his time in the war.

The war wouldn’t end for Knapp until he was captured himself a few months later. He was transferred between various Confederate prison camps until the Civil War came to an end. After the war, he moved to Michigan where he married his wife Georgianna before moving to Washington state in 1887.

When he started reading the news story about Meadows coughing up the bullet that should have killed him, Knapp knew he’d been the man who shot Meadows. So he sent the former Confederate a letter. The two men finally met, compared what they knew and realized it was true: Knapp was the soldier who shot Meadows that day near Vicksburg.

Meadows was 78 years old when he coughed up the bullet. Knapp was 79. It had been 58 years since the bullet first lodged itself inside Meadows and the coughing fit that forced it out made national news. But that wasn’t the end of Knapp’s story. He would make national news once more, only this time it would take another 91 years.

Knapp, of course, was long dead and cremated by 2012, but the story of the Confederate soldier who coughed up a bullet was still a historical oddity. Alice Knapp of Nehalem, Oregon was tracing her husband’s family tree when she learned the story of Peter Knapp and Willis Meadows. She decided she would find out where Peter Knapp was buried.

When she began searching, she not only learned that Knapp hadn’t been buried at all, she discovered his ashes were still in storage at an Oregon crematorium. His wife Georgianna’s ashes were there too. No one knows how or why the ashes were lost to history. She helped arrange a burial ceremony at Willamette National Cemetery, Oregon’s largest military graveyard.