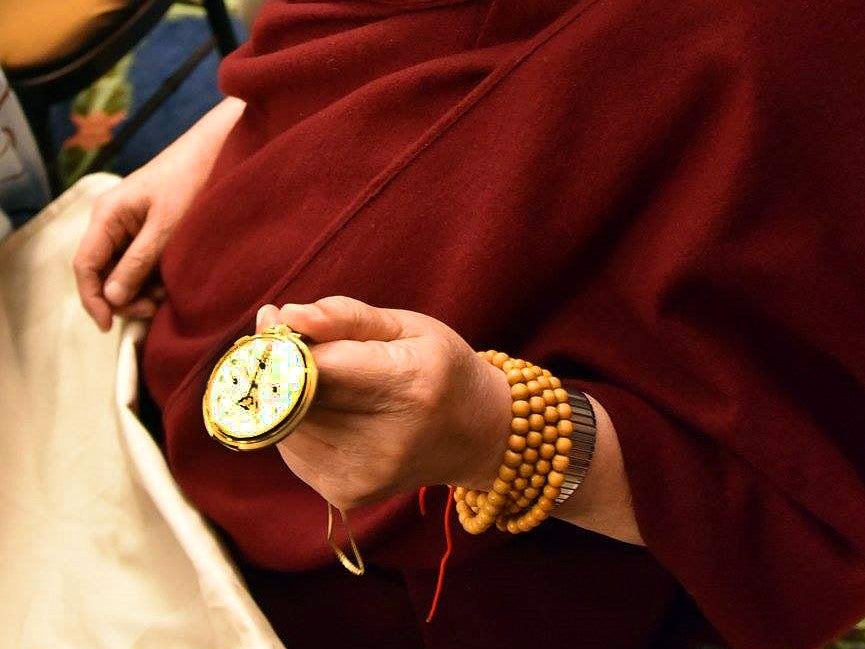 Even if you’re not a watch enthusiast, the brand name Patek Philippe probably rings a bell. Founded in 1839, Patek is part of the so-called Horological Holy Trinity of luxury Swiss watch brands along with Vacheron Constantin and Audemars Piguet. That’s right, there are brands above even Rolex. The top-tier status of these brands makes them popular lyrical references for hip-hop and rap artists looking to flex their superiority. Why then, does His Holiness Tenzin Gyasto, the 14th Dalai Lama own a Patek? As you’ve likely read the title of this article, he didn’t buy it himself.

In 1942, the war in the Pacific looked grim. The Australian, British, and Dutch forces were suffering loss after loss against the relentless Japanese military. Much of the American Pacific Fleet was sunk or damaged at Pearl Harbor, and the American garrison in the Philippines was cut off and surrounded. China, who had been fighting the Japanese since 1937, was heavily reliant on American support. However, Japan had cut the Burma road through China, forcing America to find another supply route to Chinese forces. The Office of Strategic Services was called in to find a solution.

The predecessor to the CIA, the OSS specialized in clandestine operations like intelligence gathering, sabotage, subversion, and espionage. The agency recognized the strategic potential that Tibet had in moving supplies to China. However, the idea of going through Tibet was a tricky one. It would require recognizing Tibet as an autonomous region, something China was none too pleased about. Moreover, operations in Tibet would require the blessing of the young Dalai Lama. President Roosevelt approved of the plan and the OSS dispatched two of its best agents to Tibet in late 1942.

Captain Brooke Dolan II was a naturalist who could understand the perspectives of the Tibetan Buddhists. Besides that, he traveled extensively throughout Tibet before the war and knew their customs and courtesies. Dolan was joined by Major Ilya Tolstoy, grandson of Russian novelist Leo Tolstoy of War and Peace fame. Aside from his connection to literary history, Tolstoy was an accomplished scientist who conducted extensive research at Mount McKinley in Alaska. This helped prepare him for the challenging terrain and climate he would face in Tibet.

Dolan and Tolstoy trekked in a mule caravan from India. It took them over three months to summit the Himalayas and reach the Dalai Lama, then just seven years old. The agents presented His Holiness with a handwritten letter and a gift from President Roosevelt: a Patek Philippe reference 658 timepiece. Only 15 examples of the watch were produced and it was valued at $2,800 in 1942 (over $47,000 in 2021). The young Dalai Lama gifted the agents a ceremonial scarf in return. The exchange occurred in complete silence in accordance with Tibetan custom.

The Dalai Lama approved of the request to transport supplies through Tibet into China. This friendly relationship allowed America to help keep China in the fight for the remainder of the war. It also allowed the CIA to support Tibetan resistance fighters when Communist China invaded in the 1950s.

The Dalai Lama continues to carry the Patek that was gifted to him by FDR through Dolan and Tolstoy. Sources report that the historical watch has been repaired at least three times since then. The Dalai Lama famously displayed it in 2016 during a meeting with the U.S. Congress. Made of 18k gold and featuring a perpetual calendar, moon phase, split-seconds chronograph and minute repeater, the watch would fetch a hefty sum today without its historical provenance. The fact that it involved so many famous figures and was featured in a crucial diplomatic agreement makes it absolutely priceless.