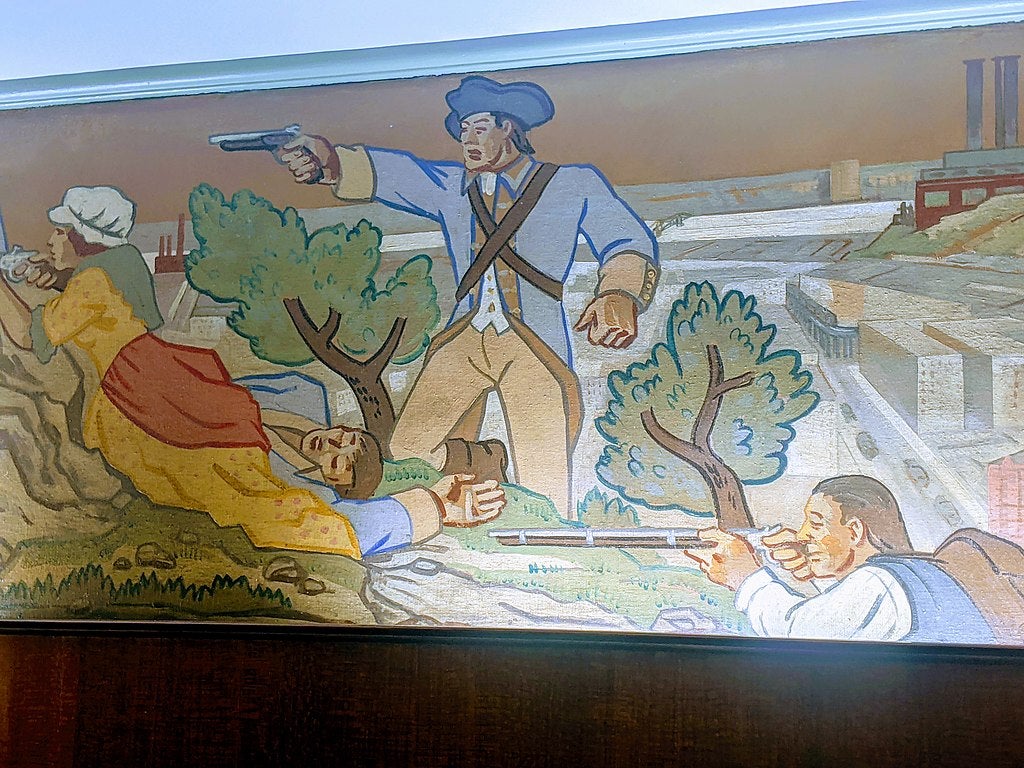 Margaret Corbin mural portion, in the lobby of building in Washington heights, NYC.

John Corbin was part of the gun crews manning two cannons as Hessian mercenaries fought to take Northern Manhattan from the patriot army fortified there. As the battle wore on, John Corbin was injured and the guns fell silent. That’s when his wife Margaret took his place, solidifying her place in history as America’s first official woman veteran.

Margaret Corbin was born Margaret Cochran to a family of Irish immigrants in what is today Franklin County, Pennsylvania. Her parents perished in a raid by native tribes. She and her brother avoided their fate only because they weren’t in the house.

At age 21, she married John Corbin, a farmer from Virginia. Four years later, the colonies declared independence from Britain and John joined the patriot cause. He joined the first company of Pennsylvania Artillery and became part of a cannon crew. Margaret was one of the soldiers’ wives, following the camp while cooking, cleaning and working as a nurse.

Not long after the Declaration of Independence was signed, John Corbin and his wife were stationed in Northern Manhattan at Fort Washington. It was at the northern tip on Manhattan Island and was critical to the defense of the Hudson River. Along with nearby Fort Lee, it prevented Royal Navy ships from sailing up the Hudson while providing an escape route for Gen. George Washington’s Continental Army in New York.

When the British finally came to take the fort, they came with 4,000 Hessians, mercenaries for hire from the German state of Hesse. They demanded the commander of the fort, Col. Robert Magaw, surrender. He politely informed them the Americans would fight until the last man. Among the last men of the fort would be one woman: Margaret Corbin.

John Corbin’s artillery company was left behind as Washington and his army made their escape to White Plains, New York. The Hessians launched an attack on the cannon’s position, killing John and leaving the gun crews short one person. Margaret, who was providing water to the men during the battle, watched her husband die and then took over for his position.

The Hessians didn’t stop their assault on the position just because the guns stopped momentarily. When Margaret took her position on the gun, it started firing again and the Hessians tried to stop it once more. Margaret worked to keep the gun going, cleaning, loading and firing it, even as she was shot in the arm, chest, and jaw.

The guns stopped only when Fort Washington finally surrendered to the British. Margaret Corbin and the rest of the surviving members of the gun crews were taken captive by the British. It was the last patriot position left in New York.

Seen as a wounded soldier, just like any other wounded soldier, the British let Margaret go, rather than subject her to internment aboard a prison ship or in a prisoner of war camp. She ultimately survived her wounds, but never fully recovered. Life was increasingly difficult for her, and the wound left her unable to use her left arm. In 1779, she applied for aid from the government and received $30, a pension of half a soldier’s pay, and a new set of clothes. With the Revolutionary War still ongoing, Congress approved her inclusion on military rolls and was stationed at the Corps of Invalids at West Point. In 1783, the Revolutionary War ended and Margaret was officially discharged from the Army.