The British used a mini armored train during WWII 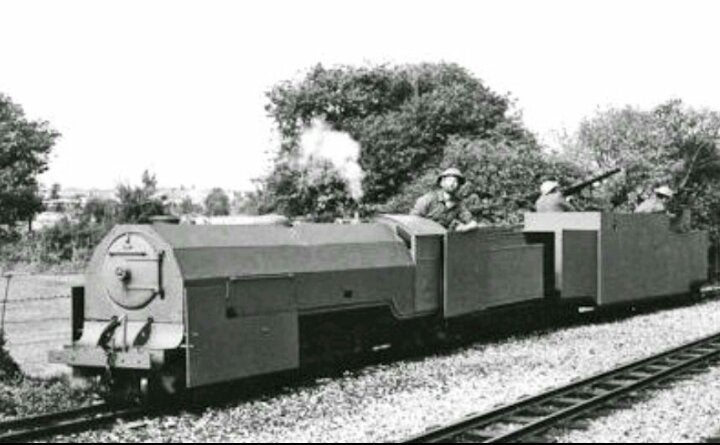 Armed and armored trains first saw use in the 19th century in the American Civil War, Franco-Prussian War and Boer Wars. Into the 20th century, armored trains were employed extensively, especially during WWI and the Russian Civil War. Capable of mounting large guns and thick armor, the trains were a formidable opponent on the battlefield. Of course, unlike tanks and planes, trains are restricted to established railway networks. So, when Britain faced the threat of a Nazi invasion during WWII, 13 armored trains were established across the country to bolster the home defense.

The layout of these armored trains was fairly typical. A locomotive sat in the middle between two armed and armored trains cars, usually repurposed steel coal wagons with added armor. Additional train cars carried extra ammunition. The standard armament for the gun cars was a QF 6 pounder Hotchkiss gun and a Vickers or Lewis machine gun. The soldiers who crewed the trains were also heavily armed with Bren light machine guns and Thompson submachine guns to compliment their standard Lee-Enfield rifles.

In late 1940, following the evacuation at Dunkirk, the British military took over many railways to host armored trains. One such railway was the Romney, Hythe and Dymchurch Railway in Kent, South East England. Being so close to France, this area would bear the brunt of the German onslaught during the Battle of Britain. However, the 15-inch gauge light railway couldn’t host the standard armored trains. Instead, the railway hosted a miniature armored train.

The Romney, Hythe and Dymchurch armored train was a fraction of the size of the other 12 trains. As a result, it was unable to mount the large Hotchkiss guns. Instead, it was armed with two .55-inch Boys anti-tank rifles and four Lewis guns. The mini armored train was crewed by the 6th Battalion, Somerset Light Infantry. They are credited with shooting down a Messerschmitt Bf 109, a Heinkel He 111 and a Dornier Do 17.

Following the Battle of Britain, with the threat of invasion all but eliminated, armored train operations were handed over to the Polish Army in the West. The Poles operated the trains until 1942 when they were moved to Scotland and operated by the Home Guard. In November 1944, the last British armored train was pulled from active service.