Israeli wrestlers were the heroes of the 1972 Munich Massacre 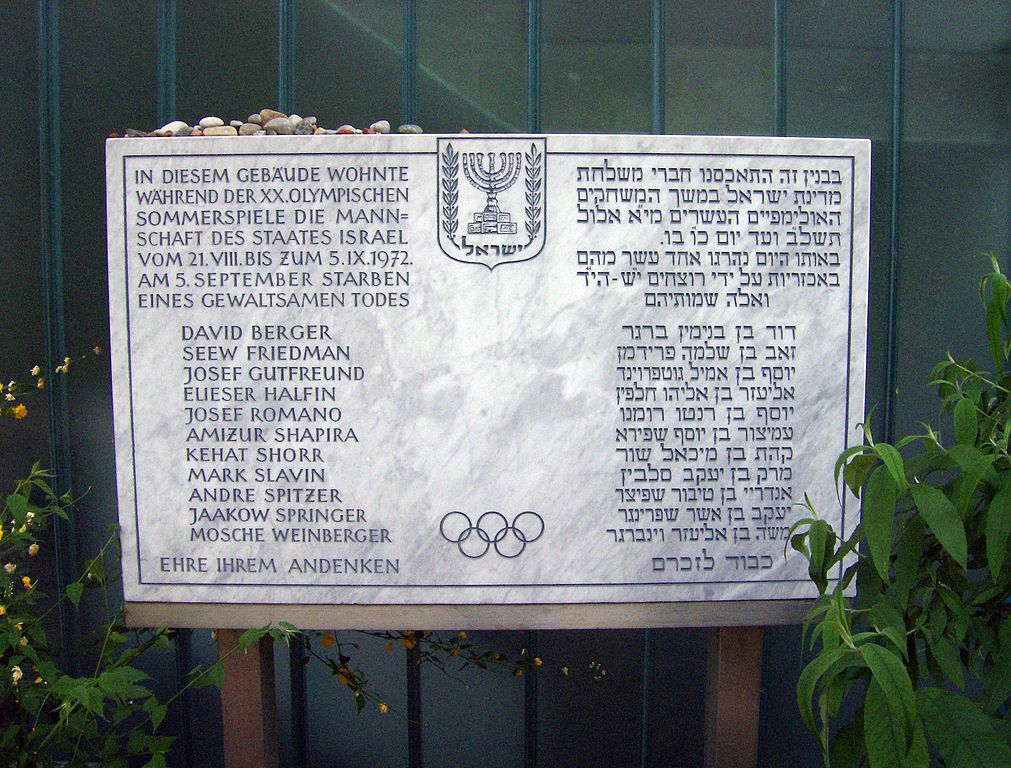 Plaque in front of the Israeli athletes' quarters commemorating the victims of the en:Munich massacre. The inscription, in German and en:Hebrew, reads: The team of the State of Israel lived in this building during the 20th Olympic Summer Games from 21 August to 5 September 1972. On 5 September, [list of victims] died a violent death. Honor to their memory.

There’s not much good that came from the hostage crisis that struck the 1972 Munich Olympics. By the end of the standoff, 11 Israeli hostages were dead, along with 5 of the Palestinian terrorists and one West German police officer. The standoff and massacre would change the way the world saw the Palestinians, the way it responded to terrorism, and led to a covert Israeli counterattack.

As the hostages were being taken, the Israeli athletes used strength and guile to save as many for their fellow athletes as possible. Had the members of Black September gone into a different apartment that night, the outcome might have been much worse.

In 1972, West Germany was hosting the International Olympic Games, trying to brush off the image of a militarized Germany and pose a calm contrast to the Communist East. The last time the Games were held in Germany, it was 1936 and much of the ceremony around the games were centered around Nazi propaganda.

To distance itself from that look, security was light. Unarmed guards were posted everywhere, but expected more trouble from ticket scalpers and drunk fans than they did the threat of international terrorists. Security was lax even at the Athletes Village, where people seemed to be able to come and go as they pleased. The apparent lack of concern bothered at least one group of athletes: the Israeli Team.

They had cause for concern. In 1972, Israel had already fought two wars against its Arab neighbors and won them handily, seizing so much land that it nearly doubled the size of the small country. It also cemented Israel’s hold on Palestinian Territory, a move that forced Palestinian terrorist organizations to step up their attacks on Israeli targets.

Israel’s delegation to the 1972 Munich Olympics became a target on September 5, 1972. At 4:30 in the morning that day, eight members of the Black September faction of the Palestine Liberation Organization, clad in tracksuits, entered the Athletes Village with bags containing AKM assault rifles, grenades, and Tokarev pistols, entering the building where Israel’s team was sleeping.

Wrestling referee Yossef Gutfreund was awakened by the sound of scratching at the team’s door. As he moved to investigate, the door burst open and the Palestinian gunmnen tried to force their way in. Gutfreund threw his 300 pound body against the door to keep them out, and woke up his teammates.

One was able to smash through a window and escape in the brief melee, another wrestling coach, Moshe Weinberg, fought alongside Gutfreund as hard as he could. The gunmen fired  through the door hitting Weinberg in the cheek. Black September then forced him to show them the other Israeli apartments.

Weinberg took them past Apartment 2, where much of the Israeli track team was housed. Instead he took them to Apartment 3, where the Israeli weightlifters and wrestlers, likely believing they would be helpful in fighting the attackers. Unfortunately, Apartment 3 was still asleep.

As they were all marched back to Apartment 1, the Israelis fought back. Weinberg knocked out one of the Palestinians and attacked another with a knife before being gunned down. Weightlifter Yossef Romano also fought alongside Weinberg but was also shot to death. The melee allowed one of the athletes to escape in the confusion.

West German police were now aware of the shooting and were on their way to the scene. There were only nine Israelis held hostage. The daylong standoff ended with a failed attempt to rescue the hostages, all of whom were killed. Five of the Palestinian terrorists were also killed. Without the efforts of the wrestling and weightlifting team, the body count would have been much higher.