7 Band of Brothers actors who got famous 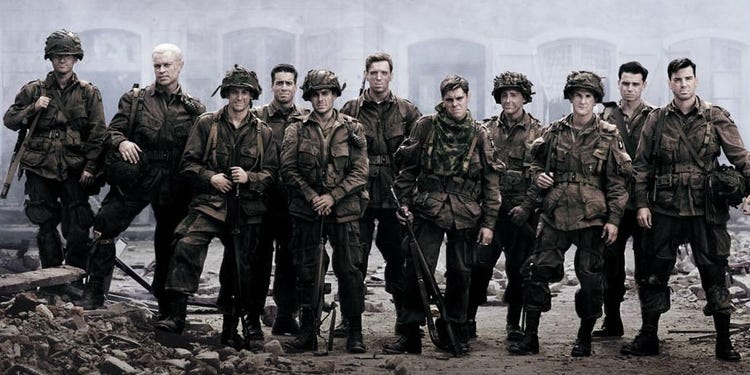 HBO’s miniseries Band of Brothers is a show that will be remembered as one of the greatest of all time. Its powerful storytelling, incredible acting and precise attention to detail make it the standard against which other military media is compared. Upon repeat viewings, you may notice a few familiar faces in some of the episodes. When the show premiered in 2001, many of these actors were still young in their careers. While Band of Brothers may not have catapulted any of them to instant fame, it’s still fun to go back through and pick them out.

Now famous for his portrayal of a young Magneto in the X-Men series (and its subsequent “Perfection” meme), Fassbender’s second credited role was as Pvt. (later promoted all the way up to Tech. Sgt.) Burton “Pat” Christenson of Easy Company. Remember the trooper whose canteen ran out before everyone else’s following the night march at Tocoa? That was him. He appeared in seven episodes of the 10-episode miniseries and can be seen until the series finale.

Yup, that Tom Hardy. Before Peaky Blinders, Venom, Dunkirk, Mad Max, The Dark Knight Rises, and even before Black Hawk Down, Hardy played Pvt. John Janovec in Band of Brothers. He appeared in the last two episodes, “Why We Fight” and “Points.” Most notably, he was the trooper caught in bed with a woman by Cpt. Speirs when he was looking for his loot of silverware. Hardy also portrayed Janovec’s tragic death in a jeep crash following the German surrender.

You know, the funny British guy that isn’t Mr. Bean. Well known for his comedies alongside Nick Frost like Shaun of the Dead and Hot Fuzz as well as blockbuster hits like Mission Impossible and Star Trek, Pegg had a short role (albiet prominent) in the first two episodes of Band of Brothers. Portraying Easy Company 1st Sgt. William Evans, Pegg did his best American accent (i.e. southern) when delivering the court martial notice from Cpt. Sobel to Lt. Winters. He also made notable appearances alongside Sobel during the barracks inspection for contraband and later in a C-17 on D-Day with Lt. Meehan.

Speaking of Lt. Meehan, O’Mara played Sobel’s replacement in the training period leading up to D-Day in “Day of Days” and the flash-forward to D-Day in “Currahee.” Recently, O’Mara has appeared in Agents of S.H.I.E.L.D. as Jeffrey Mace and in The Man in the High Castle as Wyatt Price. Military movie buffs will also recognize him as Company Sergeant Jack Prendergast in Siege of Jadotville. Lt. Meehan and 1st Sgt. Evans were killed on D-Day when their C-17 was shot down by ground fire.

Yup, late-night talk show host and SNL regular Jimmy Fallon had a brief cameo in “Crossroads” as Lt. George Rice. As Easy Company and the 101st move into Bastogne to hold off the German counteroffensive, Rice pulls up in a jeep with ammo to equip the ill-prepared paratroopers. The jeep that Fallon drove was an actual WWII jeep and used a manual transmission…which Fallon admitted he didn’t know how to drive. So, the plan was to have Fallon push the clutch in while two stagehands push the jeep to close the shot. “So I drive, I hit my spot, I go, ‘Good luck boys,’ and I forget to press the clutch, and these two dudes are pushing the car, and the wheels aren’t moving because the clutch isn’t in,” Fallon recalled. “I don’t know how they made it work, but they made it work.”

Ironically, James McAvoy would go on to star across from Michael Fassbender in the X-Men series as a young Professor Xavier. McAvoy played Pvt. James Miller in “Replacements” as one of the titular troopers. Miller was a member of Sgt. “Bull” Randleman’s squad and saw his first action during Operation Market Garden. Sadly, he was killed during Easy Company’s withdrawal from Neunen. His death is depicted on-screen and he is shown again at the end of the episode when Randleman retrieves his dogtags.

Funny enough, Andrew Scott acted across from James McAvoy in 2015’s Victor Frankenstein. However, the Irish actor is arguably better known for his type-cast baddie roles like Jim Moriarty in Sherlock and C in Spectre. Scott played Able company radioman John Hall in “Day of Days” where he links up with Lt. Winters upon his landing in Normandy. Gaurnere later nicknames him “Cowboy” despite his Manhattan roots. He links back up with Winters during the assault on the guns at Brecourt Manor where he is killed in action. The real paratrooper was actually named John Halls (with an “s”) and was from Colorado. For movie trivia buffs, Scott had a previous WWII-film role credited as “Soldier on the Beach” in Saving Private Ryan three years earlier.