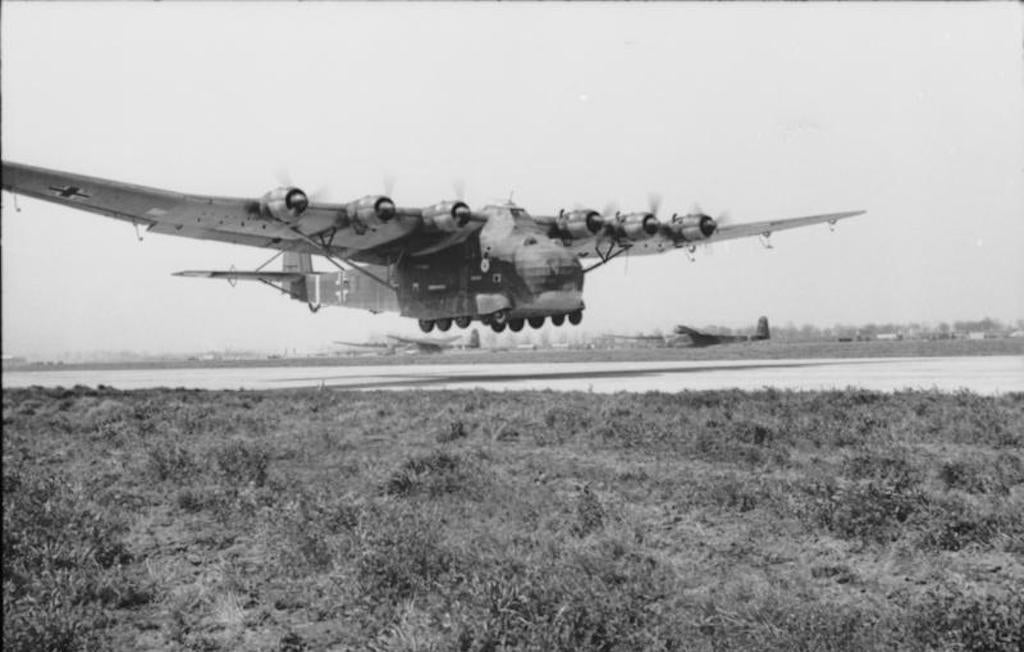 Nazi Germany planned a lot of insane weapons, tanks, and artillery during World War II, but one of them actually got made early in the war. The Messerschmidt 323 was the largest air transport plane to be used in the war and they were massive – at least for the time. It was a German wonder weapon that actually worked.

The Germans began planning a large cargo/personnel carrier early in the war, given the need to transport vehicles and heavy guns across the English Channel for Operation Sea Lion, the invasion of the British Isles. Sea Lion was canceled, but Germany still needed a heavy airlift capability.

With the invasion of the Soviet Union looming, the German government gave its best aircraft manufacturers two weeks to design an airframe that could carry a Panzer IV tank. Junkers still used wood in its designs and even built a prototype, but the lack of the wood needed to mass produce the plane forced the company to scrap its bid.

Messerschmidt took a page from its own book, making a motorized version of its Me 321 military glider plane. With Operation Barbarossa in full swing, the Germans needed an air transport plane that could be produced without putting heavy strain on its industry. The company produced two early designs, featuring four engines but in the end, the design needed six engines.

The final design used aluminum tubes with wooden bracing, sported plywood wings and was covered with doped fabric, basically lacquered to produce a plastic-like finish. The engines were stripped from old French bomber aircraft and repurposed on the new transport planes.

The result was a plane that could carry 12 tonnes when fully loaded, though a full load required a rocket-assisted take-off. They could fly 177 miles per hour, much slower than some World War II bombers and a fraction of the top speed of Britain’s Supermarine Spitfire fighter planes. They also had a range of more than 600 miles at an altitude of 13,000 feet – also much lower than the Spitfire.

In September 1942, the Me 323 was ready for combat use and was delivered for the Afrika Korps Tunisian Campaign. They were capable of what was then a massive airlift, delivering supplies and moving wounded troops out of the combat zones. When armed, they carried five 13 millimeter machine guns, but were capable of firing the German 88 millimeter flak gun.

The Me 323 also saw heavy use on the Eastern Front, delivering supplies to the battered Wehrmacht as they fought the Red Army in places like Kursk and Stalingrad. The Tunisian Campaign was particularly difficult for the transports, however. Delivering supplies to North Africa was no small feat for the Germans, either by land or by sea.

Britain’s Royal Navy heavily contested the waters of the Mediterranean and the German Navy had been all but neglected in Nazi Germany’s war preparations. Airlift provided a potential answer, but the slow-moving behemoths proved to be easy pickings for the fast-moving British Spitfire.

198 German Messerschmidt 323s were made before production ended in 1944, some of which were variants on the original, yet no complete intact model of the aircraft survived the war. One incident of 27 Me 323s bound for North Africa with fighter escorts saw the Royal Air Force pick off 17 of them – a single mission loss rate of 62%.