This Revolutionary War battle was fought between Patriot and Loyalist colonists 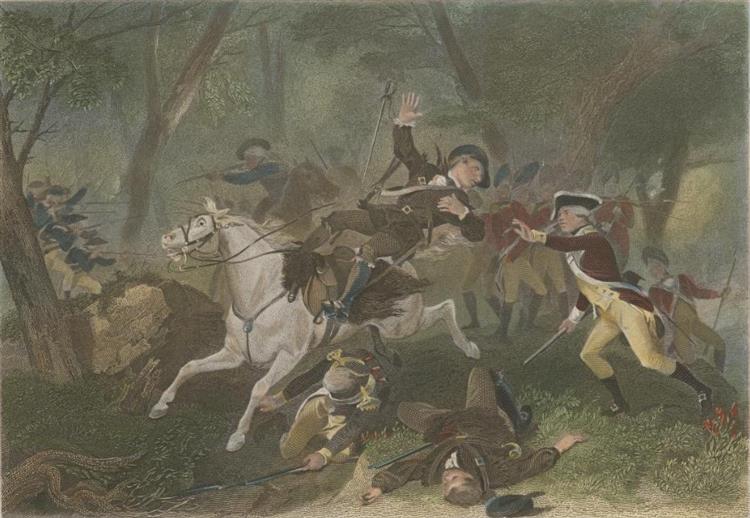 The Death of British Major Patrick Ferguson at the Battle of Kings Mountain During the American Revolutionary War, October 7, 1780 by Alonzo Chappel, 1863 (Public Domain).

An often-overlooked aspect of the American Revolution is the fact that there were colonists who wished to remain British subjects. Historians estimate that between 15-20% of white colonists in 1775 were Loyalists. Moreover, some of these colonists joined militias to counter the Patriot militias and assist the regular British military in quelling the American Revolution. One such militia was raised and commanded by the famous Scottish officer Major Patrick Ferguson.

On May 22, 1780, Ferguson was appointed the Inspector of Militia. He was sent to North Carolina and tasked with recruiting and organizing a colonial militia from the Loyalist population of the Carolina backcountry. This militia would support the main British force, under the command of Lord Cornwallis, during the Southern Campaign.

As Ferguson recruited Loyalists and built his militia, Patriot militias under the commands of soon-to-be famous Americans like John Sevier, Joseph McDowell and Isaac Shelby moved to engage him. On August 19, the Battle of Musgrove Mill saw 63 Loyalists killed and just four Patriot dead. However, this victory was blunted by the news of General Horatio Gates’ major defeat at Camden. Moreover, the Patriots learned that approximately 300 hundred Loyalists and Provincial regulars (redcoat enlisted colonials) were en route to reinforce Ferguson and the Patriots retreated.

Shelby’s militia was pursued by Ferguson’s forces for 60 miles before they escaped over the Appalachian Mountains. On September 25, Shelby, Sevier, and McDowell mustered their 600 militiamen with William Campbell’s 400 Virginian Patriots at Sycamore Shoals in preparation for an offensive. Ferguson’s Loyalists camped near the modern Tennessee/North Carolina border following their pursuit of Shelby. According to Shelby, Ferguson warned the Patriots to surrender or he would “lay waste to their country with fire and sword.”

By September 30, the combined Patriot militia reached Burke County, North Carolina and was reinforced by Benjamin Cleveland and another 350 men. As they marched on to South Mountain, North Carolina, two Patriot deserters reached Ferguson’s camp and informed him of the approaching Patriot force. He ordered a retreat to Charlotte where Cornwallis and the main British force were, and sent a request for reinforcements. Unfortunately for Ferguson and his Loyalists, the message would not each Charlotte until one day after the coming battle. On October 6, despite being just a day’s march from Charlotte, Ferguson made camp at Kings Mountain, South Carolina.

American spies reported to the pursuing Patriots that Ferguson had stopped just short of Charlotte. Needing to engage him before he could link up with Cornwallis, the Patriots put 900 militiamen on horseback and rode overnight through nonstop rain. By the afternoon of October 7, they surrounded Kings Mountain and attacked.

Not expecting the Patriots to close on him overnight, Ferguson made no provisions to reinforce his camp and the Loyalists were caught completely by surprise. Screams of charging Patriots and volleys of heavy rifle fire signaled the start of the battle. Notably, most Patriots at Kings Mountain were armed with rifles while the Loyalists were armed primarily with muskets. The Patriots advanced up the hill using rocks and trees for cover. Ferguson rallied his men and organized a bayonet charge against Campbell and Sevier’s forces at the edge of the encirclement.

Without bayonets of their own, the Patriots retreated down the hill to the low woods. Campbell rallied his men and drove the Loyalists back up the hill with heavy and accurate fire. Ferguson ordered another two bayonet charges which repeated this same cycle. After an hour of fighting, Loyalist forces were heavily attrited. Shelby, Sevier, and Campbell maneuvered their forces to the top of the hill and attacked Ferguson’s rear.

Driven back into their camp, the Loyalists began to surrender. However, Ferguson reportedly rode through the camp on horseback and used his sword to cut down any white flags that were raised. He attempted to rally his remaining men for one last desperate breakout attempt but was shot from his horse by a volley of rifle fire from Sevier’s men.

With his foot caught in the stirrup, Ferguson was dragged by his horse behind the Patriot line. A Patriot officer approached him and demanded his surrender. In a final act of defiance, Ferguson drew his pistol and shot the Patriot dead. The rest of the surrounding Patriots opened fire on Ferguson, striking him seven to eight times. Patriot accounts state that Ferguson’s body was stripped and urinated on before he was buried near the site of his fall.

Ferguson was the only British Army regular at Kings Mountain. Following his death, the Loyalists surrendered en masse. However, many Patriots refused to take prisoners in retaliation for the killing of Continental soldiers who surrendered to British forces at the Battle of Waxhaws earlier that May. Captain de Peyster took command of the Loyalists and sent an emissary with a white flag which the Patriots rejected, killing the emissary and other surrendering Loyalists. It was not until a second white flag was sent and Patriot forces were taken control of by Campbell and Sevier did the fighting finally stop.

The Battle of Kings Mountain lasted just over an hour and resulted in 290 Loyalists killed, 163 wounded and 668 taken prisoner. Meanwhile, the Patriots suffered just 28 killed and 60 wounded. The Patriots beat a hasty retreat to avoid Cornwallis and the main British force, but the battle was a major victory. Thomas Jefferson called it, “The turn of the tide of success,” in the Southern Campaign. Theodore Roosevelt later wrote, “This brilliant victory marked the turning point of the American Revolution.” In 1931, Congress created the Kings Mountain National Military Park at the site of the historic battle which is walkable for visitors today.