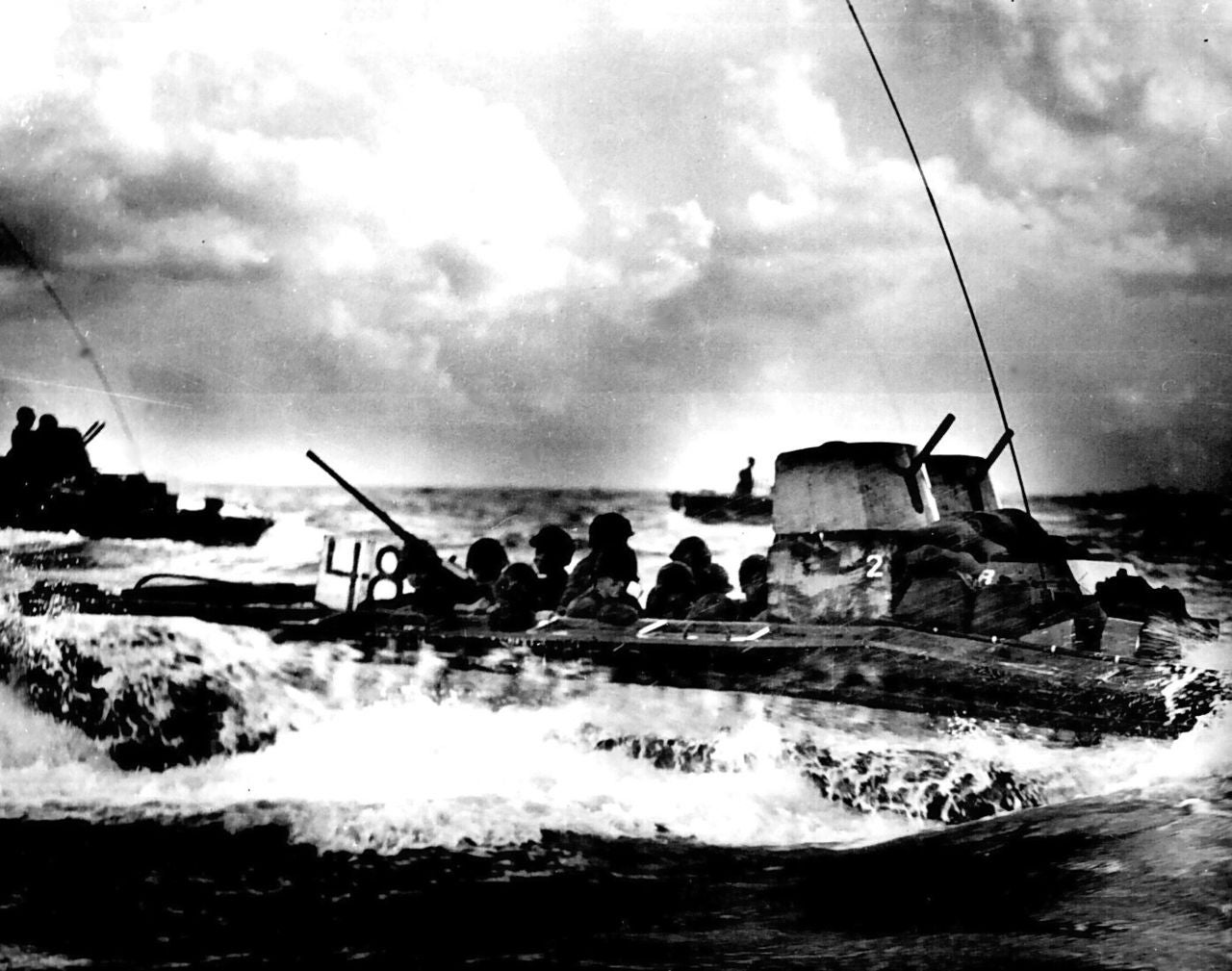 A Water Buffalo, loaded with Marines, churns through the sea bound for beaches of Tinian Island near Guam. July 1944. (National Archives photo).

From June 15 to July 9, 1944, U.S. Marines and U.S. Army soldiers fought for control of the island of Saipan in the Mariana Islands. Over 71,000 American troops fought to dislodge 29,000 fortified Japanese defenders from a position they had held since 1920. The invasion of Saipan has since been called the “Pacific D-Day,” the beginning of the end of World War II in the Pacific. Most maintain that the 1942 Battle of Midway was the turning point for the Allies in the Pacific War but with careful consideration, a case can be made for why the Marianas Campaign was the real turning point of the war.

1. Japan could not reinforce or supply its troops

Just four days after the Marines landed on Saipan, the U.S. Navy and the Imperial Japanese Navy met at the Battle of the Philippine Sea in the last of the war’s “carrier vs. carrier” battles. It was also the largest carrier battle ever fought with 24 carriers and 1,300 aircraft. The Japanese lost three fleet carriers and 700 aircraft.

When the Americans landed on Saipan, the impact of Japan’s loss of ships in the Philippine Sea began to be felt by Japanese troops, who could not be resupplied or reinforced by sea. They were on their own.

2. Saipan was a taste of how Japan would fight with no hope

Japanese troops were already known to take the fight to their enemy, even in the face of hopeless odds. Nowhere was this more apparent than on Saipan. By the end of the battle for Saipan, all the living Japanese defenders mounted up an extreme banzai charge, including the wounded. It made for the largest banzai charge of the war. The island’s 29,000 defender died, almost to the last man.

Knowing this, American war planners began to understand that an invasion of the Japanese home islands would become much more costly in terms of American lives spent fighting the Japanese (again) to the last man. This thinking led to the use of the atomic bombs and forced Japan’s surrender.

3. It put Japan in the Air Force’s bombsight crosshairs

After capturing Saipan, the United States’ newest bomber, the B-29 Superfortress, was now within striking distance of the Japanese home islands, a first for the Army Air Forces. Since the next step in winning the war after capturing the Marianas was the Japanese mainland, being able to actually hit targets there was a crucial development.

In the days and weeks to follow, USAAF Gen. Curtis LeMay began running firebombing attacks on Japanese cities using napalm and cluster munitions that devastated the wooden cities of Japan. Factories and urban areas were the top targets and much of these cities were burned in the attacks.

Aside from the victories associated with Operation Forager (the official designation of the Marianas campaign), which included Saipan, Guam, Tinian, Peleliu, and Anguar, the overwhelming victory for the Allies set the stage for the fall of the Philippines and the Ryukyu Islands.

The differences in casualties were stark and devastating. The Allies lost just over 8,000 troops in the campaign while Japan lost around 67,000. Although there was no way for the Japanese to withdraw them to Japan at this point, they were still troops the Japanese Army couldn’t afford to lose.