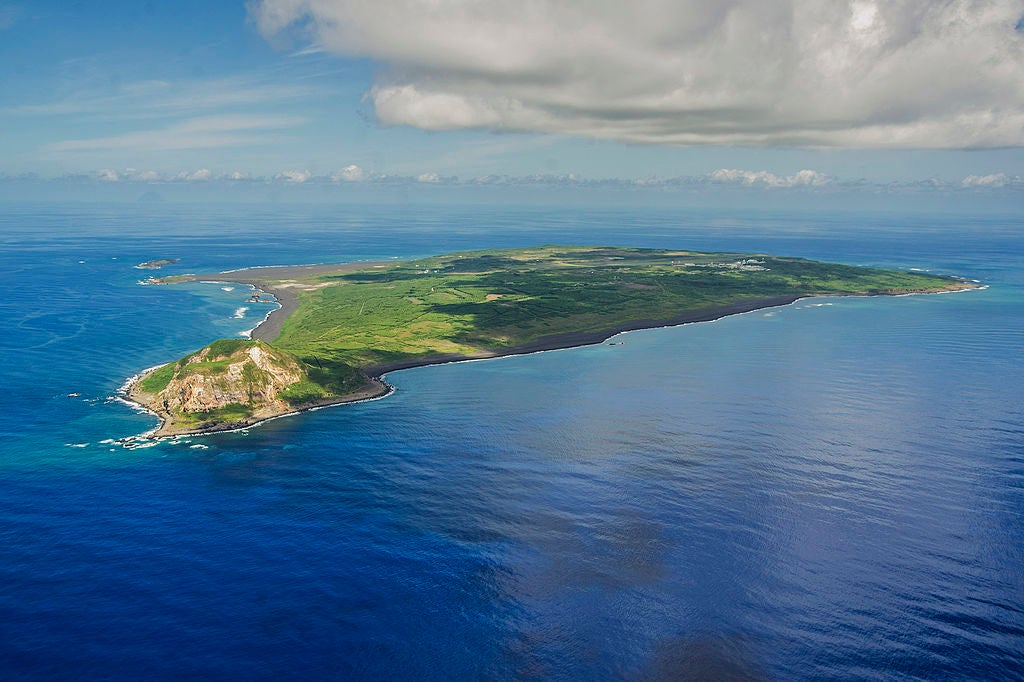 An aerial photo of the island of Iwo To, formerly known as Iwo Jima. The Battle of Iwo Jima was the largest sustained aerial offensive of the Pacific theater of World War II. The U.S. sent more than 70,000 service members from the Navy and Marine Corps and 450 ships in what became one of the largest invasion forces of the Pacific campaign. (U.S. Navy photo).

In October 2021, the Japanese All Nippon News Network photographed the rusted-out hulls of some 24 World War II-era vessels in the waters around one of the war’s most storied places, Iwo Jima.

By all accounts, the wrecks had suddenly appeared from the bottom of the ocean after sitting there for more than 75 years.

Some say this is not the first time the ghosts of Iwo Jima have floated to the surface, but it is definitely the first time they were recorded for the internet audience. The reason for their sudden reappearance is volcanic undersea activity.

That activity is not just forcing the vessels up into the fresh sea air for the first time in years, it’s also creating new, albeit temporary islands in the chain. The Japanese refer to the island as Iwo To, and it usually washes away fairly quickly. The new island is the third of its kind to appear in the area since 1900.

The U.S. Navy says it sank the ships to form a breakwater and build an artificial harbor to support the landings and movement of supplies during the February 1945 Battle of Iwo Jima during World War II. Other sources say the Imperial Japanese Army and Navy sank the ships prior to the fight for Iwo Jima, as a means to prepare for a U.S. invasion.

Even the American and Japanese governments don’t know for certain. What they do know is that undersea volcanic activity is the reason for the underwater purge, and the same activity is steadily pushing the island of Iwo Jima higher and higher above sea level.

An official from the Japan Meteorological Agency says Iwo Jima is rising about three feet per year on average and now sits 50 feet above sea level. The agency only began collecting this data in 2014, but believes it was likely rising at the same rate through years past.

Iwo Jima is still used by the United States Navy and is currently the site of Marine Corps Air Station Iwakuni, where naval aviators train for carrier landings aboard the USS Ronald Reagan. The Reagan’s home port is nearby Yokosuka Naval Base. The Nimitz-class carrier is the flagship for Carrier Strike Group Five, the only forward-based carrier strike group and part of the U.S. 7th Fleet.

Japan’s Self-Defense Forces also conduct flight training on and around the island as well as training for disaster relief operations. Both the U.S. and Japanese defense departments believe that rising islands, ships, and volcanic activity are unlikely to affect naval operations in the Pacific Ocean or around Iwo Jima specifically.

Iwo Jima, though a strategic island during World War II, is a relatively remote location sitting 760 miles from Tokyo. It is also subject to adverse weather conditions and supplying the island and its functions can be a logistical challenge, which is forcing the U.S. and Japanese governments to consider moving the operations to another location. The Japanese Self-Defense Forces are already in the process of moving Iwo Jima’s flight operations to Mageshima island in western Japan.

Although more than 6,800 Marines died trying to take the island in World War II, its historical significance has not diminished. The strategic situation in the Pacific Ocean has changed, however. The island is more than 1,850 miles from the South China Sea, where China is flexing its new military power and more than 1,337 miles from another Pacific hotspot, North Korea.