Top 20 Army/Navy trash talking memes - We Are The Mighty 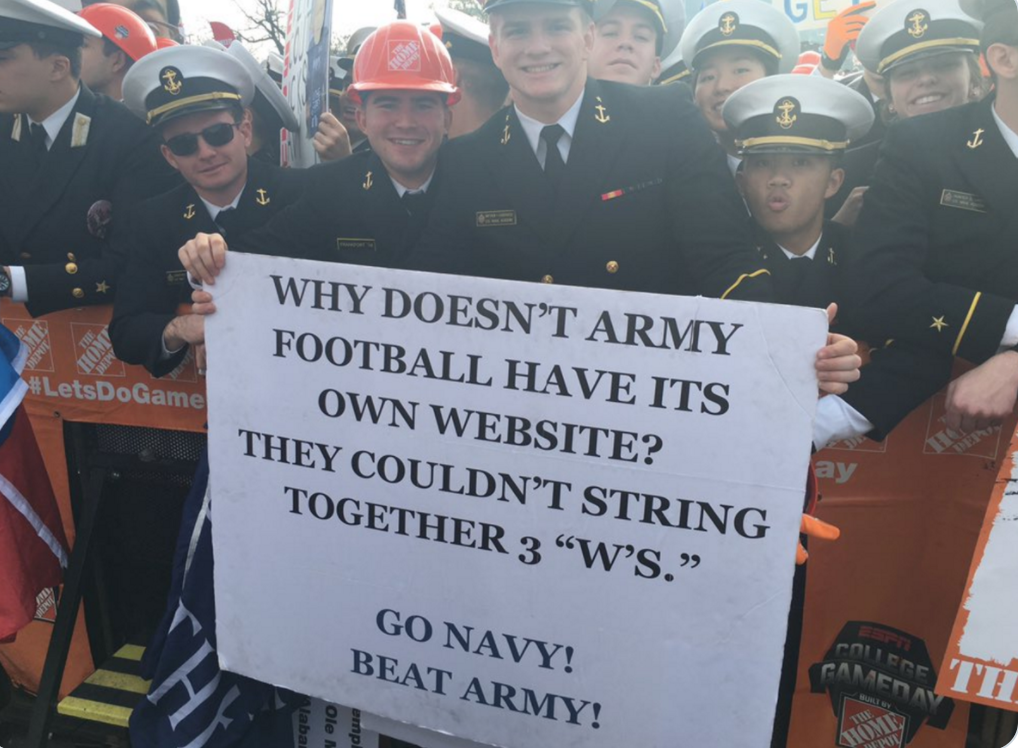 Since the dawn of time and inception of the Armed Forces, trash talking has been an accepted right of passage for military members. As sports entered the equation, naturally the trash talking intensified. As the internet gave birth to memes, this opened so many doors to hilarity. No matter who you are cheering for during the Army/Navy football game, we here at WATM hope you’ll embrace the epic nature of our top 20 trash talking memes.

Everyone knows the Marine Corps is the toughest, most badass branch – after all, there’s a reason they say, “Always a Marine”. Except on Army/Navy game day, then they are suddenly sailors.

Blending in with their surroundings is what the entire Army does best. Hoorah! Oh wait, that’s the Green Berets. Never mind.

That’s just how they roll.

Although there may be seven (we see you Space Force) branches of service, only two are known for their epic rivalry. Three don’t have their own teams, one is the stepchild everyone forgets about and the other does the fun flyovers. It is what it is.

The Navy has been winning on the field for the Army/Navy Game for years. Looks like they just won Halloween too.

When the Navy recruiter tells you it’s the perfect way to see the world, but all you see is the ocean or the deck you are constantly swabbing. #NavyLife

The Navy may have the Seals, but the Army has the Rangers and Green Berets. Their cool-guy factor is off the charts. Well, I guess the Navy has the badass Marine Corps too – until they drop them off to handle their end of the fight.

When you have the lowest ASVAB score requirement of all the branches of service, you might be a soldier.

The truth hurts, but it’s gotta be said. Who grew up wanting to play Navy? It just didn’t happen! GI Joe’s never go out of style, sort of like an MRE – something that sailors never have to worry about eating.

I mean, you don’t see this badass Navy Seal wearing an Army uniform when he’s in need, do you? #BeatArmy

When the Navy Seals come, they run.

When your branch sails the high seas to bring the Marine Corps to fight with the Army. Oooooh, burn. #BeatNavy

When you started the whole “Armed Forces” thing and support all of the other branches, you get some bragging rights. #GoArmy

One branch is breaking down doors in the name of freedom. The other is protecting its citizens from the danger of allergies. #GoArmy

When you’ll wear anything before you’ll wear Army swag, like a pink bunny onesie from your grandma. #GoNavy

Listen, we had to end it with this one. Trash-talking is all fun and games but every single man on the field would sacrifice it all for his country. No matter who you are rooting for, just remember that after the game – we’re all on the same team.