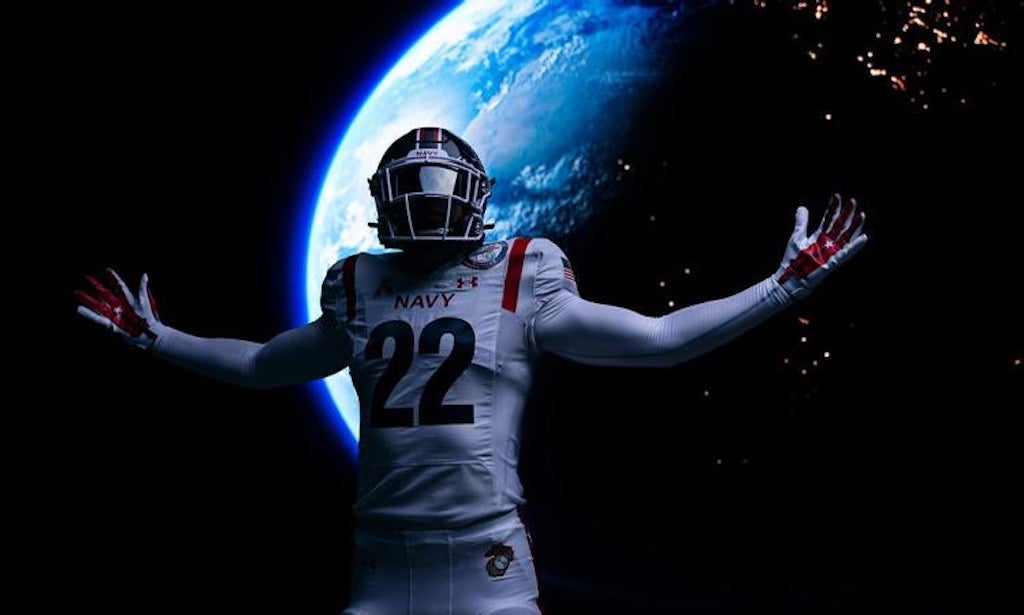 Neil Armstrong, the first person to walk on the moon, was a Navy man. He served as a fighter pilot during the Korean War before becoming a Navy test pilot and, eventually, a NASA astronaut. However, Armstrong was not a graduate of the United States Naval Academy (just ask any Purdue alumni). Still, no university has graduated more astronauts than Annapolis. To honor this achievement, the Navy Athletics is wearing NASA-inspired uniforms for the 2022 Army-Navy Game.

“Houston, U.S. Army is about to have a problem,” the U.S. Navy posted on Facebook following the uniform reveal on November 21, 2022. Navy Athletics has adopted the tagline “From the sea to the stars” for the uniform theme and is featured on the back of the helmet. Their uniform reveal video capitalizes on the popular dream of visiting the stars and recognizes the achievements of the astronauts who have actually done it.

“This one’s got me super excited,” said Senior Raider Midshipman Nicholas Straw during a player reaction video. “It’s my favorite uniform we [have] had since I’ve been here, so I’m super excited for it.” Aside from the unique nature of the NASA theme, the uniforms themselves were designed with the utmost attention to detail.

The predominant white uniforms with red and blue accents are very reminiscent of NASA and space exploration. The Naval Academy Athletic Association and Under Armor even partnered with NASA to use their official “meatball” logo on the right sleeve to match an astronaut’s spacewalk suit. Helvetica font is used for the numbers and wordmark as it’s been used by NASA for decades on everything from handouts and signage to the space shuttle itself.

Perhaps the most impressive detail of the NASA-inspired uniform is the helmet. Each hand-painted helmet features the classic NASA “worm” logo and the Moon on the left side. On the right is a painting of the iconic photo of Bruce McCandless II, a Naval Academy grad, floating untethered in space with the Earth behind him.

The incredible new uniforms have Navy fans buzzing and even more excited for the Army-Navy game. However, Army is showing strength in the face of the big reveal. “We don’t see a problem at all!” Army commented on Navy’s Facebook post. As always, the issue will be settled on the field. The 2022 Army-Navy game will take place at Lincoln Financial Field in Philadelphia, Pennsylvania on December 10.