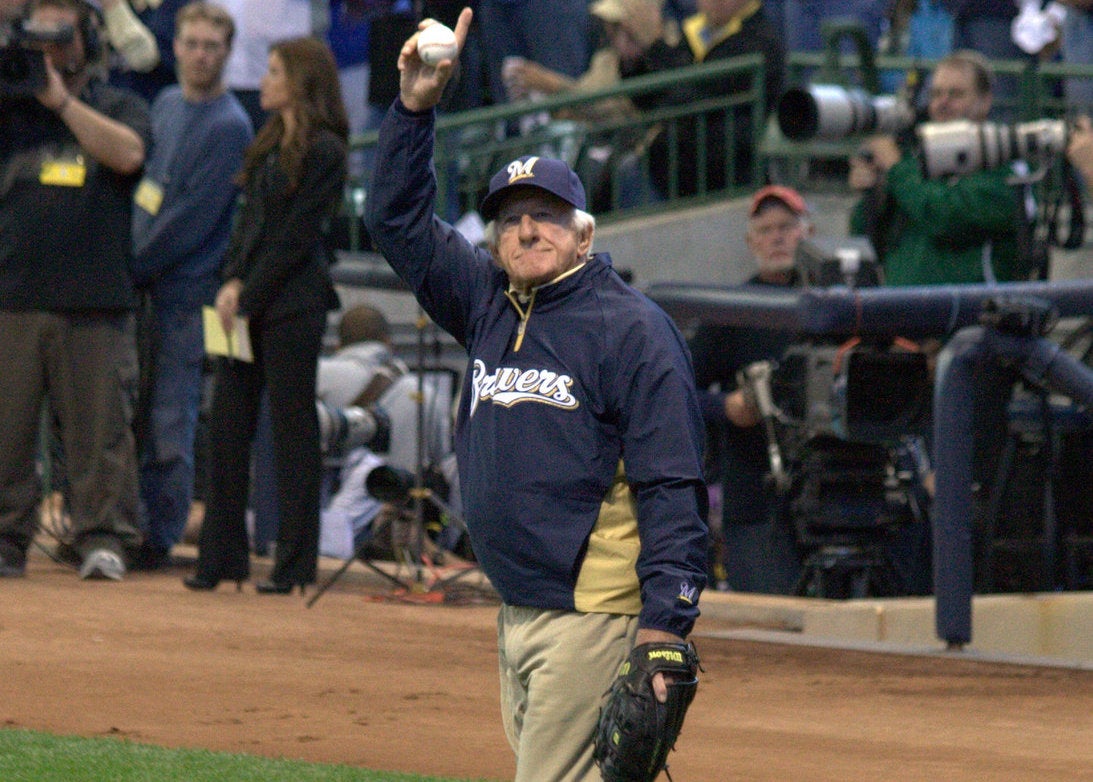 Bob Uecker acknowledges the crowd at Miller Park in 2011.

Milwaukee, Wisconsin’s favorite son, Bob Uecker was the starting catcher for the then-Milwaukee Braves at the beginning of his baseball career. Uecker is an actor of films and television shows. He’s been the voice of the Milwaukee Brewers for 52 years but he’s also an Army veteran and philanthropist, supporting the Make-a-Wish Foundation, Boys and Girls Clubs of America, and supporting cancer research, among others.

Bob Uecker, a lifelong member of the American Legion, was honored with the 2022, James V. Day “Good Guy” Award for all his work supporting important causes.

Bob Uecker was born and raised in Milwaukee, where he attended a technical high school. After school, he’d watch the local minor league baseball games. He started playing baseball in school as a pitcher, but would soon be moved to catcher.

“My first game, my parents and everybody was there, my friends, and the manager came out to take me out of the game. I didn’t want to come out because I was embarrassed. I said, ‘Let me face this guy one more time, because I struck him out the first time I faced him.’ He said, ‘I know, but it’s the same inning. I’ve got to get you out of here.’ And that was my move to catching.”

He didn’t finish high school and joined the U.S. Army at age 20 in 1954. He wanted to play ball in the Army, alongside players in the service who played the game in the minors or in college. He didn’t have either of those qualifications.

So he chose a college and lied about it. He told them he played baseball at Marquette, a university close to Milwaukee. The only problem was that Marquette didn’t have a baseball team. No one checked on it, so he got to play.

He started playing professionally in 1956 with the Milwaukee Braves (now in Atlanta). The highlight of his time as a player, he says, was hitting a home run off of legendary pitcher Sandy Koufax. Known for his sense of humor, he jokes about his career as a baseball player, which he says was unremarkable.

“We had a good team. We had pretty good uniforms. For the first time in my career, we were really organized,” he told American Legion Magazine.

After baseball, Uecker became best known for his work outside of the game. After a series of commercials he did for Miller Lite, he played a sportswriter on the TV sitcom “Mr. Belvedere,” and sportscaster Harry Doyle in the 1989 film “Major League.” his Miller Lite commercials actually landed him the gig in “Major League.”

Now 88 years old, Uecker is still calling games on the radio for the Milwaukee Brewers, and is the third longest tenured radio announcer in baseball.  He was inducted into the Baseball Hall of Fame in 2003 because of his broadcasting career, not for his record as a player. That doesn’t matter, because Uecker will always be remembered by his nickname, Mr. Baseball.