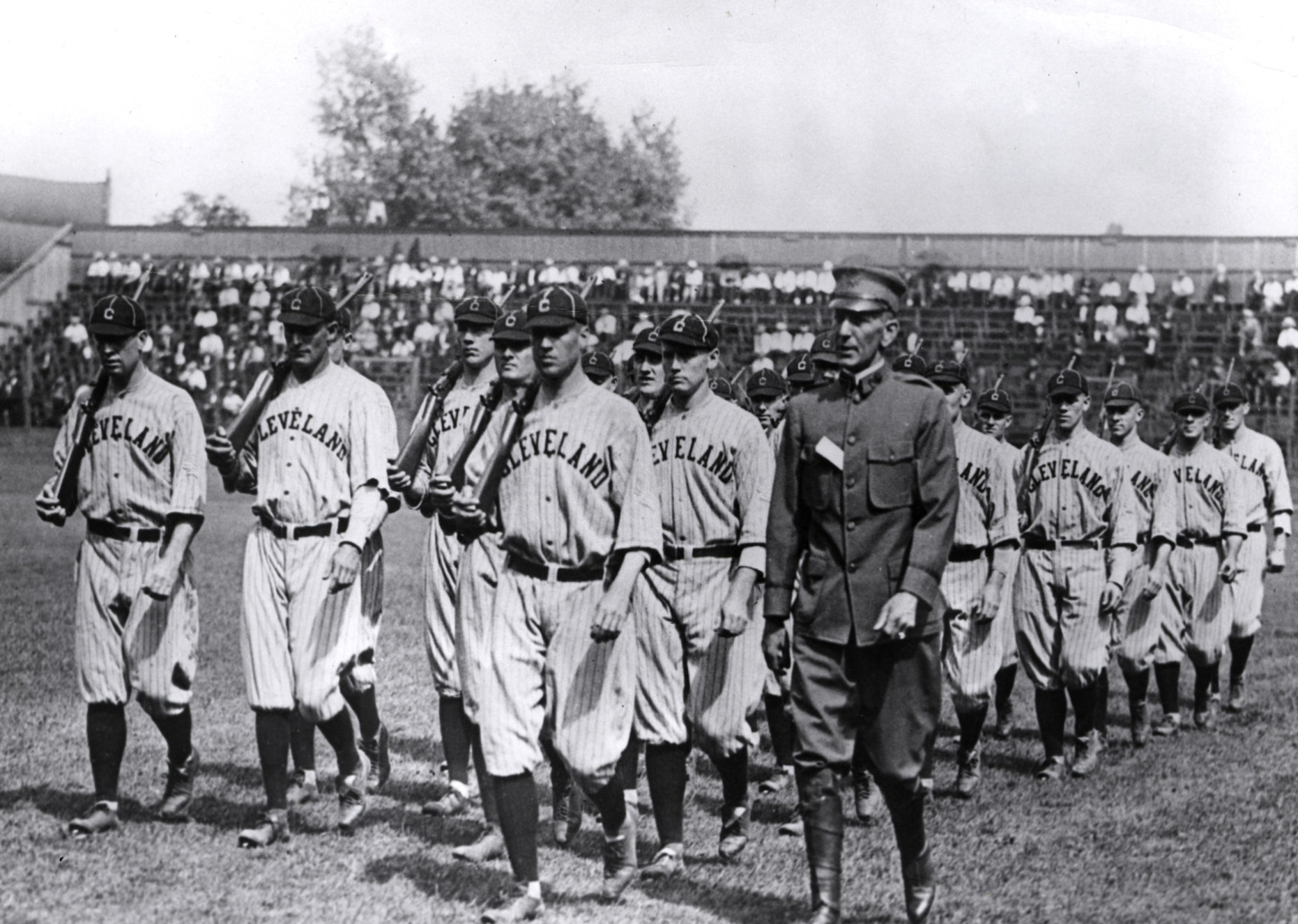 In 1917 and early 1918, teams like the Cleveland Indians tried to show their support for soldiers in World War I by having players participate in pre-game “drill” sessions. BL-1942-77 (National Baseball Hall of Fame Library).

Frederick Thomas got at least two major breaks in his life. His first came in 1911 while visiting a baseball game in Wisconsin with his dad. That break led him to a professional baseball career. His next lucky break came in 1918 when he was traded to the Red Sox, but joined the Navy during World War I. Thanks in no small part to Thomas’ pre-Navy ballplay, the Boston Red Sox made it to the World Series that year. Luckily, the Navy allowed the third baseman to take a break from his naval career to play with Boston in the big game.

While Thomas was a young boy, his parents moved the family from Menominee Falls, Wisconsin to Mukwonago, a town just outside of Milwaukee. As a high schooler, Thomas was active in the school baseball team as well as playing third base in the local city league, although he played under an assumed name to retain his amateur status.

The day after he graduated from high school in 1911, his father took him to a baseball game in Fond Du Lac, where Thomas caught one of the biggest breaks of his life – the kind every ball player dreams about. The home team was set, but their third baseman happened to get hurt that day. The team’s manager noticed Thomas and asked if he could play.

Thomas, though scared at playing in a bigger league, said he could. After the manager hit a few grounders toward Thomas, he took the young man onto the team. Thomas’ first professional ball game was the next day. They were playing Rockford, the best team in the Class C Wisconsin Illinois League.

Even as a rookie, Thomas’ skills did not disappoint. His infield game was the best and Fond Du Lac held Rockford scoreless until the ninth inning. When the time came for Fond Du Lac’s at bat, Thomas was the second batter and was supposed to sacrifice with a bunt. He tried, but Rockford made an error and both runners scored, winning the game for Fond Du Lac.

Thomas worked his way up through the leagues, playing Green Bay, Omaha, and elsewhere until he was drafted by Cleveland after the 1914 season. He wasn’t quite in the majors yet, as Cleveland sent him to their team in New Orleans for the 1915 season. In 1916, a trade deal sent Thomas to the Boston Red Sox, who sent him to the international league in Providence, Rhode Island.

It wasn’t looking great for Frederick Thomas, but he was still talented and a change in leadership saw him added to the Red Sox roster for the 1918 season. He made his big league debut on April 22 of that year. By May he was in the starting lineup and his hitting, baserunning and defense were superb.

But by then the United States was at war in Europe and Thomas was called back to Wisconsin to be inducted into the Navy. While in the Navy at Great Lakes, Thomas played baseball, but this time he did it for the Great Lakes Navy team, like many professional players at the time, even playing against the Chicago Cubs in August 1918.

The Cubs, it just so happened, were headed to the World Series against Thomas’ team, the Boston Red Sox. As the first game of the series neared, Boston was having trouble at third base, and asked their star player if he could get a furlough from the Navy to play in the big game. To his surprise, the Navy granted it.

Boston would win the series in six games and Thomas would play all of them without errors. His solid play contributed to Boston becoming the world champion that year. It wasn’t long before World War I ended, too. Thomas was discharged and returned to baseball for two more years, being traded to the Washington Senators after the 1919 season. He was the last surviving player of the Sox’s 1918 team, dying in 1986 at age 93.