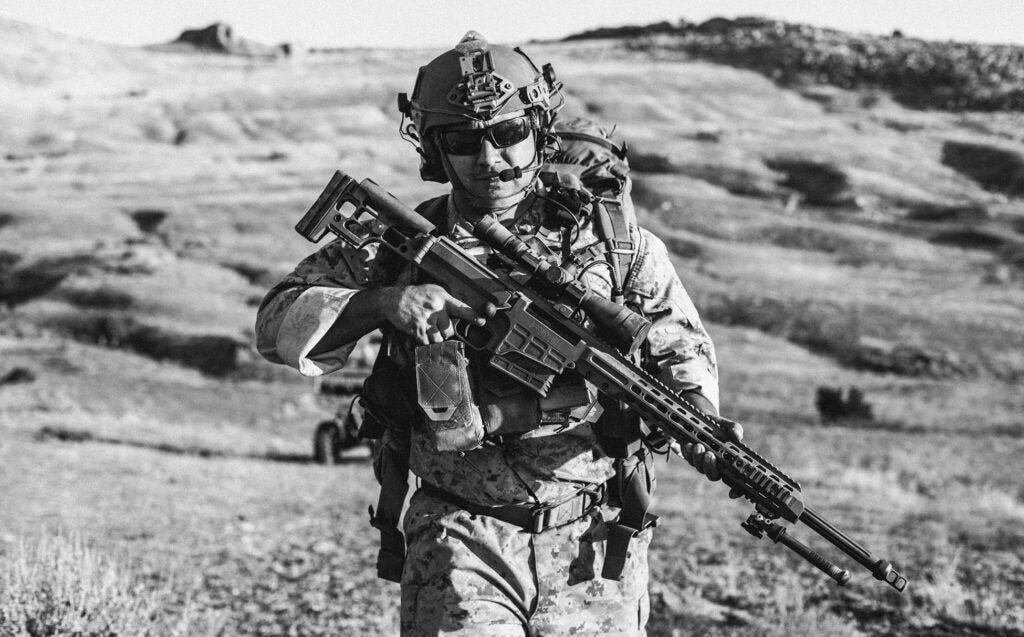 The Barrett Firearms Company has become synonymous with its iconic M82/M107 .50-caliber rifle. When U.S. Special Operations Command announced the Precision Sniper Rifle program, Barrett submitted its bolt-action Multi-Role Adaptive Design rifle. Although Remington’s submission initially won the contract, it was later found to be unsatisfactory and the contract was re-competed as the Advanced Sniper Rifle program. Barrett won the ASR contract with the MRAD which was designated the MK22 and has been adopted both by SOCOM and the U.S. Army.

A key feature of the MRAD, as its name highlights, is its adaptability. The rifle can be configured to fire multiple calibers including 7.62x51mm NATO, .300 Norma Magnum, and .338 Norma Magnum. Along with the caliber, the length of the MRAD’s barrel can also be changed out. This adaptability allows military users to configure the MK22 for the specific requirements of different missions. The military package is deployment-ready and includes the barrels and magazines for the aforementioned calibers, a scope, suppressor, parts and tools. This package is available on the civilian market, minus the scope and suppressor, for a whopping $18,000. Even the rifle alone still retails for $6,000. To lower the bar of entry for the MRAD, Barrett developed the Single Mission Rifle.

A simplified version of the MK22, the MRAD SMR utilizes a fixed stock and fixed barrel. While this means less adaptability in the platform, it does come with a more palatable price tag. Barrett quotes the retail price of the SMR as $1,500-2,000 cheaper than the MK22 depending on caliber and availability. If caliber conversion isn’t a priority, the SMR offers the same performance as the SOCOM-adopted rifle that it was derived from at a more affordable price. In addition to the three military calibers included in the MK22 deployment kit, the SMR is available in precision calibers like 6.5 Creedmoor, .300 PRC, and .338 Lapua Magnum. Even with the lower price, Barrett guarantees sub-MOA accuracy out of the SMR with proper ammunition loads.

Although the SMR is now officially on the market through Barrett’s seven authorized distributors, the first production run of the rifle was almost immediately sold out thanks to the popularity of the MK22. For shooters looking to pick up a “budget” version of SOCOM’s new sniper rifle, keep an eye out for the SMR.