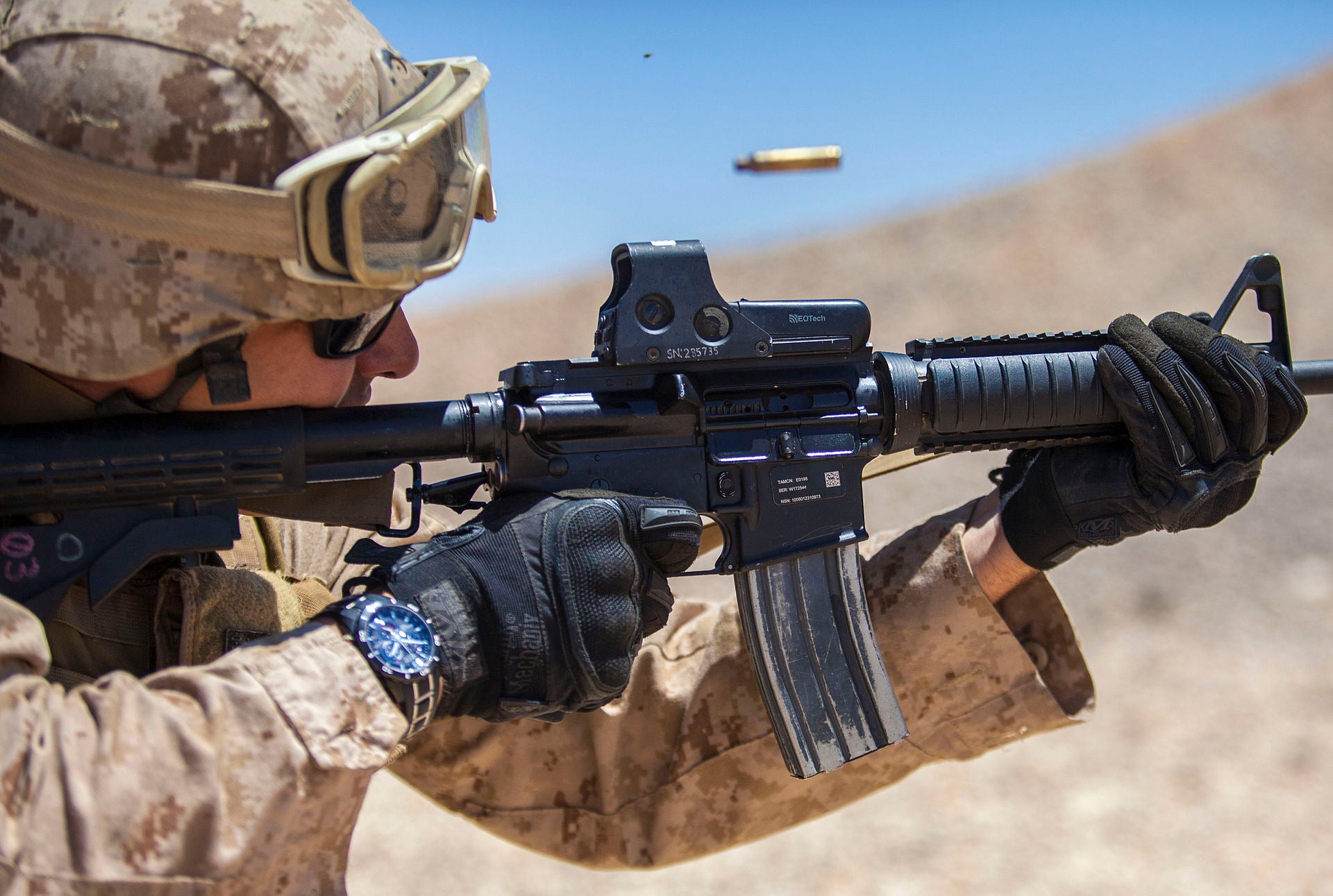 Beyond instinctive point-and-shoot aiming, iron sights are the most basic aiming device for firearms. While their rugged simplicity has worked well on the battlefield for centuries, electronic sights have evolved exponentially through the 20th and early 21st centuries. Still, the idea of a sight that uses a hologram sounds like something out of Star Wars. However, that’s exactly what the EOTECH company makes. Their Holographic Weapon Sight was chosen by U.S. Special Operations Command as its Close-Quarter Combat Optic…twice.

In 1996, EOTECH introduced the world’s first HWS at the Shooting, Hunting and Outdoor Trade Show. Five years later, they introduced military and law enforcement HWS optics, winning the Shooting Industry Academy of Excellence’s Optic of the Year Award. Unlike traditional electronic sights, the HWS doesn’t project an image onto glass with a reflective reticle system. Rather, the reticle is recorded in three-dimensional space onto a holographic film that is part of the optic’s window. The reticle is illuminated by a laser diode rather than an LED like other electronic sights. Its parallax, or changed perception of the reticle relative to the target based on the position of the shooter’s eye behind the sight, is virtually zero. As long as the shooter can see the reticle through the window, they can make hits on target, making EOTECH’s HWS unbeatable for fast, close-range engagements.

In addition to speed, holographic technology provides other advantages to special operators. Although infrared lasers can be used to aim when using night vision, this active aiming method can also be seen by near-peer adversaries with night vision of their own. In this type of engagement, passive aiming through an optic becomes the preferred method. However, this requires an optic with good light transmission and clarity. Although traditional LED red dots have improved in these fields, EOTECH’s HWS provides unbeatable light transmission and clarity while also providing a wider array of night vision-compatible reticle brightness setting thanks to its holographic technology.

On the subject of visibility to the enemy, the HWS provides no visual signature to the front. Whereas traditional LED red dot emitters can be seen from the front due to the nature of the dot’s forward projection onto the front lens, the laser that illuminates the holographic reticle can’t. The HWS is also more capable than an LED red dot when paired with a magnifier. A 1 MOA red dot grows three times larger when viewed through a 3x magnifier. The 1 MOA center dot, and the rest of the reticle, of the HWS remains 1 MOA under magnification due to its holographic projection.

Unfortunately, all of the advantages of holographic technology come with disadvantages too. The laser used to power the optic requires more power than an LED and the EOTECH HWS has an infamously short battery life of weeks to months compared to years for leading red dot brands like Aimpoint. New users also find the holographic reticle fuzzy when they focus on it rather than the target. Moreover, EOTECH found itself in hot water with the U.S. government for defects in their sights.

In 2001, EOTECH HWS optics were chosen as the preferred close-quarters battle optic of USSOCOM as well as select Army and Marine Corps units. However, in 2015, EOTECH’s parent company at the time, L-3, was sued for civil fraud. The U.S. government accused EOTECH of covering up known defects of thermal drift and moisture incursion in their HWS optics going back as far as 2006. Thermal drift is when an optic’s zero shifts in extreme temperatures while moisture incursion causes the optic to fog up and dim the reticle. L-3 settled for $25.6 million and repaired or replaced military, law enforcement, and civilian HWS optics. Moreover, EOTECH was overhauled to prevent any future quality issues. EOTECH products were also rebranded with a new logo to reflect the overhaul.

Following the thermal drift and moisture incursion issues, USSOCOM recompeted its Close-Quarter Combat Optic contract. On April 17, 2019, EOTECH announced that it won a $26.3 million contract from USSOCOM to provide close-quarter sights as well as clip-on magnifiers as part of the Miniature Aiming System-Day Optics suite. Under the five-year indefinite delivery, indefinite quantity contract, EOTECH has outfitted special operators with its latest EXPS3-0 HWS as well as its G33 3x magnifier. This iconic combination of an HWS and magnifier, sometimes referred to as a hybrid sight, has been popularized in TV shows, movies, and video games. Exposure in media has made EOTECH and its HWS synonymous with special operators and fueled demand for EOTECH products from military, law enforcement, and civilian customers around the world.