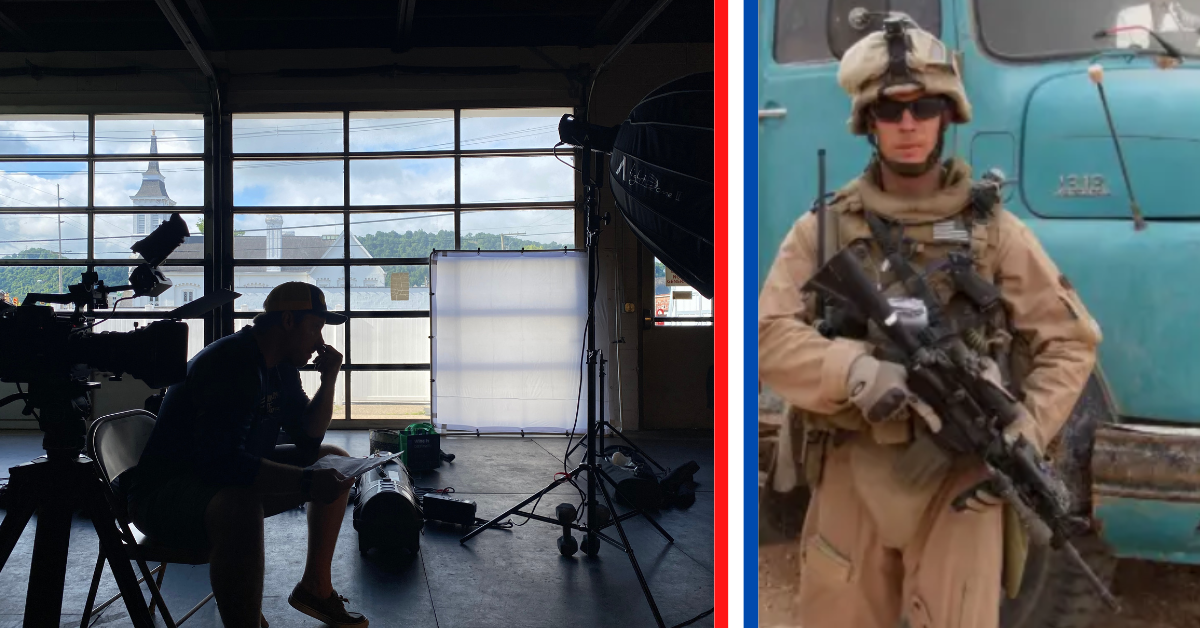 Adam “Chase” Millsap is well-known for his TV/film work, bringing authenticity from the battlefield to Hollywood.  This veteran Marine officer turned Green Beret is just getting started but it’s the different worlds he’s lived in driving his passion for storytelling.

“I saw Independence Day when I was 13 years old and I thought it was the coolest movie I’d ever seen in my life. I knew instantly that I wanted to be a Marine like Will Smith and I wanted to fight aliens,” Millsap laughed.

The Texas native wanted to become a pilot and applied to the Naval Academy to make it happen. Millsap was in his pleb or freshman year in 2001, joining just before terrorist attacks would change everything.

“I was getting my haircut when the second plane hit the towers and everyone’s pagers started going off,” he shared. “I was running through Bancroft Hall, hearing them talking about how we’re [the Naval Academy] about to get hit by an airplane. I ran back to the barracks, half my head shaved. One of my guys just gave me a baseball bat and told me to guard the door, not to let anybody inside. That’s how I started the first day of war.”

Living Through the War

The events of 9/11 would create a ripple of impact which would shatter most of what Millsap thought his service would look like. Dreams of flying planes went out the window – his conviction to become a Marine Corps Infantry Officer took its place. He’d just finished his infantry training post-graduation from the academy in 2005 when he received unexpected news.

“I was told there had been an accident in a unit and they fired the platoon commander. They told me I was going to go over to Iraq and be the combat replacement. I was given just a few days to get to Twentynine Palms,” Millsap said. “I packed up my car and drove across the country and I saw my mom and my granddad for like a day. A few weeks later I was in Iraq.”

Dangerous combat environment aside, it was one of the hardest things he’d ever have to walk through. “I was really aware of the fact that this wasn’t a regular war. I mean, it was an insurgency, we were a counterinsurgency. I knew I had to figure out very quickly who I could trust and who I couldn’t,” he explained.

Not only did Millsap arrive alone not knowing anyone, he was replacing another academy graduate and joining a platoon which had already been in combat for months. The Marines around him wouldn’t talk to him and even the NCO’s were unhappy with his presence. He did the only thing he could think of doing to make an impact.

Hours later a Marine grunt encouraged him to get lower so he wouldn’t get shot and a week later, he found an IED before it exploded. “After all that they realized I wasn’t completely worthless,” Millsap smiled.

He made it home six months later but was ready to go back to Iraq, feeling his team had just begun making headway before their deployment was finished. “I started to learn Arabic because I knew we were going back and it was going to be bad,” he explained. “But my boss called me and told me I was going to be moved to the MTT (Military Transition Team) to train the Iraqis, who at the time were under-resourced and often plagued with insider attacks. I turned to my buddy and said,`Nice knowing you’.”

Despite the dire personal outlook – Millsap said it ended up being an incredible experience and one of the most informative times of his life. It led to not only living and training with the Iraqi forces but would kickstart his work with the Intelligence Community and the Special Forces.

Though the events leading up to him turning over his Marine uniform for a Green Beret remain mostly in the gray, as most operators know, suffice it to say – it wasn’t an easy process. “When I told my boss I wanted to go Army Green Beret there were some choice words and a strong lack of conviction I could make it happen,” he laughed.

Jokes aside, Millsap gave up everything he’d accomplished over five years as an officer and three Iraq deployments in the Marine Corps to pursue the coveted long tab. “It was a really rough time. Three of my personal friends from my class were killed and guys kept getting wounded. I wanted some payback, honestly. The Green Berets spoke the language and had the freedom to go after the enemy in ways we couldn’t. This seemed like the best way and opportunity to get it,” he shared.

Millsap showed up for the selection process in Ft Bragg in his Marine cammies – making him an instant target. But he made it and completed the Q course not long after. Though an assignment to an active Special Forces Group was on the horizon, it was going to take a year for approval. Wanting to get back into the fight faster, he pivoted to join a National Guard unit instead.

He’s proud of his time with 19th Special Forces Group and the work he did but knew after five years he was ready to hang it all up in 2015. When an Iraqi interpreter he’d not only worked with but who’d saved his life in combat needed help getting out of Iraq – a reignited passion emerged. Yet this time he would deploy with a new weapon.

“I didn’t know the first thing about cameras, lighting or sound but my gut told me that our story was powerful and that we needed to show the reality faced by so many of our allies turned refugees,” Millsap shared.

Though the film (Captain’s Story) he ultimately created with National Geographic to tell their story did not yield the result he wanted with policymakers or the Department of Defense, his commitment to advocating for wartime allies  was cemented.

Since then he’s written and continued to produce shows for National Geographic, Roku and most recently CBS’s The United State of Al which highlighted last year’s chaotic withdrawal from Afghanistan on broadcast TV.

While attending graduate school at the University of Southern California, he met David Gale, founder of We Are The Mighty. The quick interaction at a party would lead to a successful five year career growing the military entertainment and lifestyle brand while also honing his filmmaking craft. It would also lead to being a producer for two seasons of the United States of Al, a CBS comedy about a Marine veteran and his interpreter.

“Movies got me into the military and I think there’s a whole new generation ready to serve. I want to tell stories that give a sense of value and give the sense that you can make good out of a mess,” he explained.

When Millsap left We Are The Mighty in 2022 – he was ready for his next mission. It would take him away from the military and into the decimated streets of Portsmouth, Ohio and the epicenter of the opioid crisis.

As a longtime friend of Army veteran Dale King, who’s the founder of what’s become known as The Portsmouth Method (and Doc Spartan)  – he knew they had something special. “I didn’t know anyone in addiction or recovery but I had the skill set to amplify what he and his team were doing,” Millsap said.

Small Town Strong is a documentary which Millsap credits as some of his most important work. With a country still devastated by the impacts of the opioid epidemic, telling a story of hope was a way to make a difference. Though the release date hasn’t been announced, it’s anticipated to make its way into the spring film festivals.

There’s also a memoir on the horizon.

His life was irrevocably changed by a movie as a young kid and by those moments in the barber’s chair on 9/11. 20 years of war, combat and moral injury made a deep mark on his heart and mind. But despite the challenges, Millsap wouldn’t change a moment and is finally at peace.

It’s a feeling he hopes others can find.

“There’s more good than evil in this world. I know because I’ve seen it,” he said. “I think that if we allow ourselves the time to breathe and tell our stories, we can have an even bigger impact.”