Understanding US Air Force uniforms - We Are The Mighty 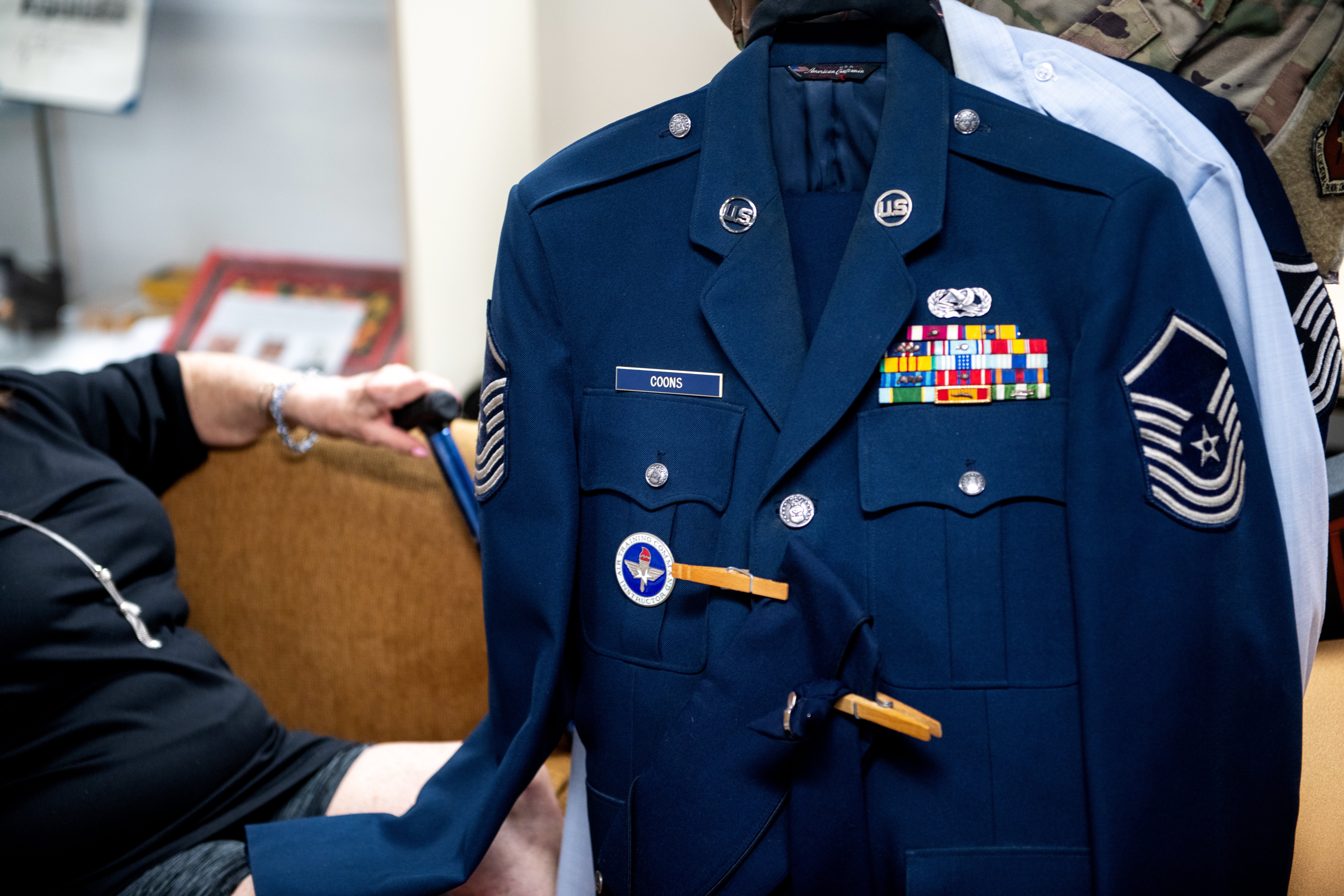 When the Air Force became its own branch of the DoD, it quickly realized it needed its own look. They had to have their own USAF uniform! Gone were the days of rocking hand-me-downs from the Army Air Corps. The problem? No one really knew what an Airman should look like. So, they first debuted a new enlisted rank insignia one year after forming as a branch. Airmen wore this uniform with fresh black leather accessories – a fashion step up from the russet brown leather they wore before. Then, a few years later, the Air Force came out with a blue dress uniform. The original color was Uxbridge blue, after the former Bachman-Uxbridge Worsted Company. This suit looked like an Army service dress uniform.

Then in 1966, the USAF uniform changed again. This time, they added a blue long sleeve winter shirt with epaulets. Epaulets were unadorned. Officers wore rank insignias on their collars. Enlisted Airmen sewed their insignia to their sleeves. In 1993 the Chief of Staff of the Air Force introduced a new three-button service coat. The coat had no epaulets and officer’s braid on lower sleeves, denoting rank. It was a disaster. Senior officers complained that it looked identical to those of commercial airline pilots … because it did. So, the Air Force corrected the issue. These days, the coat is still part of the official uniform. There’s been some talk of new dress uniforms, but so far, the Air Force’s leaders still need to settle on a new look.

Wondering about DoD uniform guidelines? We’ve got you covered with this post.

The USAF service dress uniform is worn to non-formal but official events like graduations and promotion ceremonies. The current uniform includes a three-button coat with silver-colored buttons. The coat features a design known as “Hap Arnold wings.” The Air Force Uniform consists of a matching pair of trousers, and pants can be substituted with a skirt. Enlisted Airmen wear cloth ranks on both sleeves. Officers wear metal ranks on the shoulders of the coat.

Airmen wear a mess dress to formal or semi-formal events like dining-ins, dining-outs, or military balls. Questions about the protocol for dining-ins or dining-outs? Check out this post. The current mess dress has been in use since the 1980s. Since 2020, female Airmen can wear mess dress pants as part of their USAF mess dress uniform. That’s a win because the evening-length skirt was not super flattering for anyone. Jackets have silver buttons. Medals and wings are worn in miniature size over the left breast. Command insignia is worn on the right breast. Commissioned officers wear rigid shoulder boards like officers in the Navy. Enlisted Airmen generally don’t wear a sleeve braid. There’s no hat or name tag with this uniform.

If you served in the 1970s like retired MSgt Rick Brumble, you’ll probably remember the 1505. This tan, short sleeve uniform featured cotton shirts and trousers. The name 1505 comes from their shade and they were a USAF favorite for many. In fact, this uniform was a hold-over from back before the AF was its own branch. Females who served during this era wore light-blue combinations. Later, a version of the blue service uniform replaced both of these, most to the chagrin of all the Airmen who were fans.

Since 2018, the Air Force has worn the Army Combat Uniform Operation Camouflage Pattern (OCP) as part of their daily USAF uniform. Check out the wild history of OCPs here. However, there are some exceptions. Several job-specific Airmen can wear olive green or desert tan one-piece flight suits. These include pilots, navigators, and combat systems officers. Exceptions are also made for aircrews, missile crews, and remotely piloted aircraft crews. These Airmen are also authorized to wear a two-piece OCP pattern flight suit.

This USAF uniform includes everything you need to get your fitness on. It includes shorts, either a short-sleeve or long-sleeve t-shirt, a jacket, and pants. The shorts are AF blue. They feature silver reflective stripes on the legs. An added bonus is a key pocket attached to an inner liner that will never properly hold your keys. There’s also an ID pocket, so you’re never without your CAC.

T-shirts are light gray, with moisture-wicking fabric. There’s a prominent Air Force logo on the upper left of the chest and splayed across the back, too. Airmen wear a blue jacket with white piping in cold weather.

Like other branches, there are several unique ceremony unit uniforms for the Air Force. These include band and equestrian uniforms. Additionally, the Air Force Drill Team, along with installation honor guards, wear a distinctive honor guard uniform. Military Training Instructors (the Air Force’s version of drill sergeants) wear a campaign hat with their basic uniform.