The complete guide to Air Force Bases in Florida 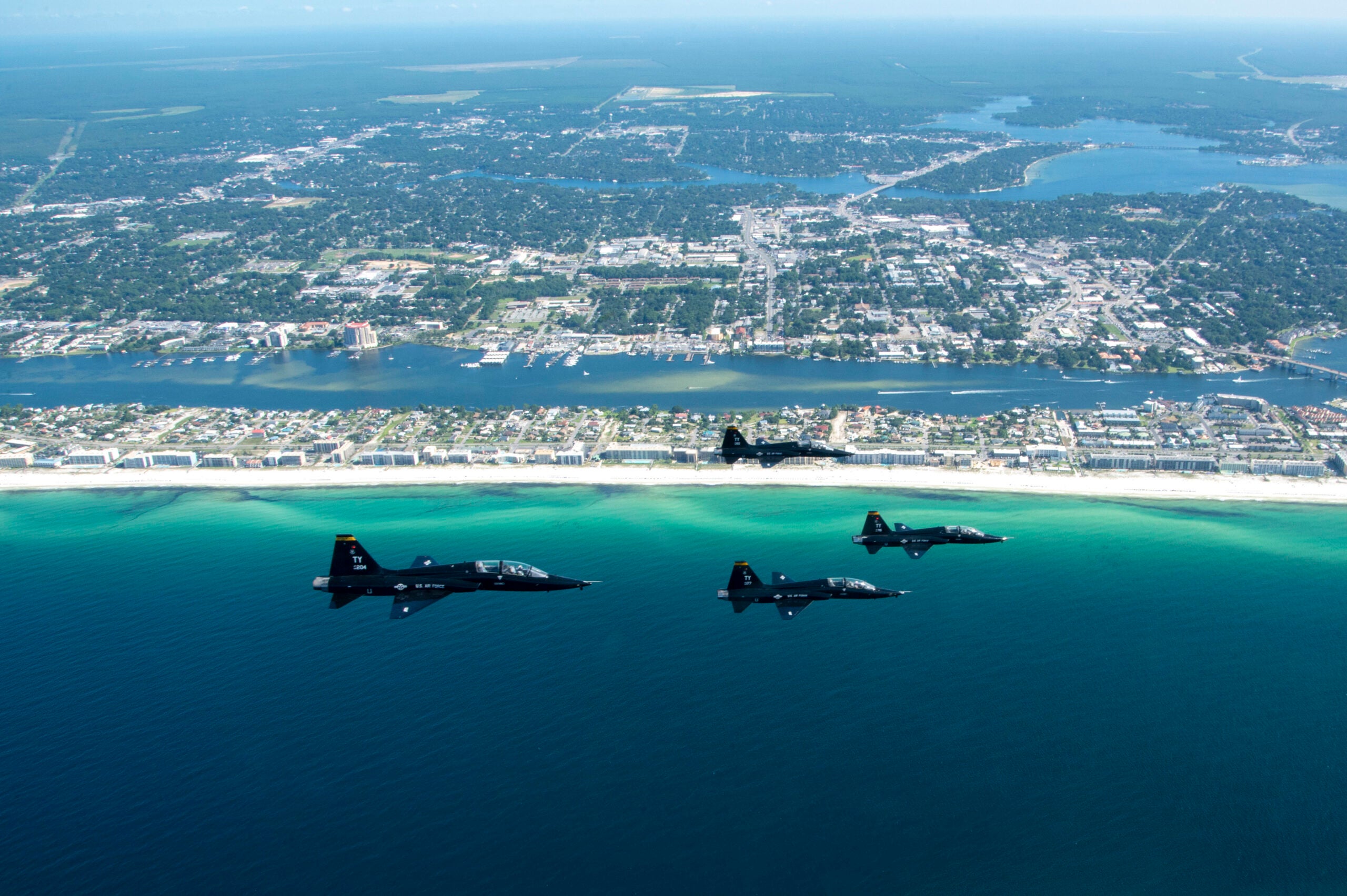 Military bases in Florida include representation from all the branches of the military – including the Space Force! In fact, the Sunshine State boasts 21 installations. The Pensacola/Jacksonville area is home to the most bases. But, as you might expect, they’re on the coasts too. Here’s your guide to air bases in Florida.

Located in Valparaiso, Florida, Eglin Air Force Base is home to the 96th Air Base Wing. This Wing is under control of the Air Force Materiel Command. The 96th’s mission is to support air deployments worldwide with weaponry and ordinance support. Another resident unit, the 26th Test Wing, helps achieve that goal. Elgin AFB got its start in 1935 as the Valparaiso Bombing and Gunnery Base. It served as an Army Air Corps training center for seven years. Then, in 1942, the installation became a munitions and proving ground. After the Air Force established as its own branch, the name changed to Eglin Air Force Base.

This is the place Airmen go to Special Ops school. Hurlburt is part of the greater Elgin footprint. It’s due west of Mary Esther, Florida, a super tiny town with a big-hearted feel. The town gets its name from its first postmaster who named it after his two daughters. How sweet is that?! Hurlburt is part of the Emerald Coast, a major tourist attraction that features pristine white sand pieces and brilliantly turquoise waters. The 1st Special Operations Wing (SOW) calls Hurlburt home. The 1st SOW also has tenant units at Nellis and Eglin AFBs. Its mission focus is unconventional warfare: counter-terrorism, combat search and rescue, personnel recovery, psychological operations, “deep battlefield” resupply, interdiction, and close air support.

This Air Force installation is located near the southern tip of the Florida Peninsula, about 25 miles from Miami. Homestead Air Reserve Base is home to the 482nd Fighter Wing. Of course, several tenant organizations operate at the base as well. The installation traces its roots to the early years of WWII when Lt. Col. William Plummer assumed control of an isolated airstrip located about a mile inland of Biscayne Bay. Then, after the attack on Pearl Harbor, Army Air Corps leadership decided the site would suit the country’s defense needs. In the first six months of its existence, the Army Air Corps used Homestead Army Air Field, as it was known, as a scheduled stop for aircraft coming from the northeastern part of the country. Then, in 1943, the installation assumed a more active role with the activation of the 2nd Operational Training Unit.

In 1962, the 31st Tactical Fighter Wing moved from George AFB, California to Homestead Air Reserve Base in Florida. Then, when the U.S. discovered Soviet medium-range missiles in Cuba that same year, the installation swelled. Targets identified, Homestead Airmen stood at the ready to strike. Of course, the Russians backed down and Homestead’s op tempo changed with the decreased threat.

The 93rd Fighter Squadron advance party served on the front lines of Operation Iraqi Freedom in March 2003. Two F-16 aircraft and two pilots participated in the campaign over Baghdad. Today, the 482nd continues to support training operations. It’s also home to the most active NORAD alert site in the continental United States.

Located about 7 miles from Tampa, this Florida Air Force base is home to over 3,000 Airmen and 12,000 service members from over 50 mission partners. MacDill is a support facility for refueling. Impressively, the base boasts being able to refuel all aircraft types in all parts of the world. The installation got its start as Southeast Air Base under command of the Army Air Corps. Today, it’s named in honor of Col. Leslie MacDill, a WWI pilot who was killed in a crash.

Two bombardment units trained heavily at MacDill in preparation for WWII. Both the 44th Bombardment Group and the 29th Bombardment group flew missions to the Philippines as part of Project X, a plan to escort combat aircraft to Philippine bases. These two groups continued to play a large role in America’s involvement in the war.

Tyndall AFB is located southeast of Panama City and is surrounded by water in all directions. The base has been around since 1941, when it was used as a gunnery range. It was named for Florida native Lt. Frank Tyndall, a WWI veteran and Silver Star recipient. Plenty of famous people have cycled through Tyndall, including Hollywood actor Clark Gable. Tyndall Air Force Base is home to the 325th Fighter Wing. The 325th FW’s mission is to develop resourceful and resilient Airmen. Also on base, you’ll find the 325th Operations Group, the 325th Maintenance Group, the 325th Medical Group, and the 325th Mission Support Group.

In 2018, Tyndall Air Force Base in Florida sustained a direct hit from Hurricane Michael. Construction is underway to rebuild the base and shape it into the first “Installation of the Future.” In September 2023, the base expects to welcome the F-35 Lightning II.

What is the smallest Air Force base?

Most people will say the Goodfellow AFB in San Angelo Texas is the smallest in the world. Often called the Normal Brown Air Force Base, this is one of the few DoD installations named for a female service member. Goodfellow is a non-flying installation whose major missions include cryptology and intel training.

How far can you live off base in the Air Force?

That’s going to depend on your Command. Speak with your unit for more guidance.

How often do you change bases in the Air Force?

On average, Airmen and their families stay at an installation for two to three years. Each PCS is different, though.

Do military bases have curfews?