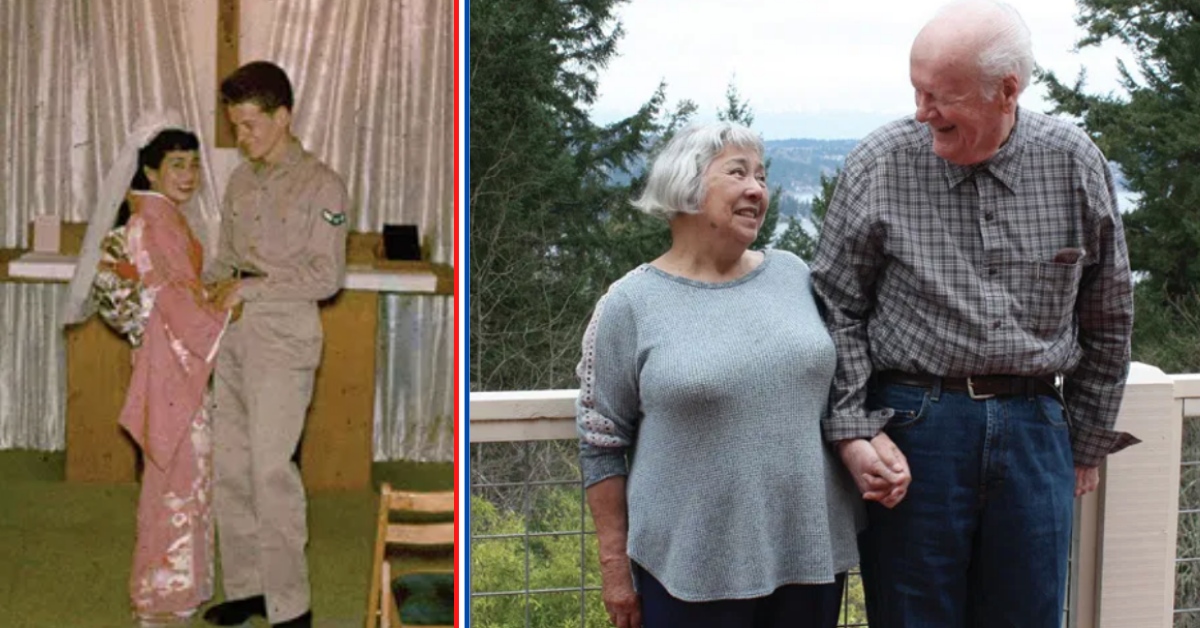 I came to America in 1960. Washington is such a beautiful state, with its mountains, oceans and rivers. In many ways it reminds me of Japan, and that’s why I settled here. There’s also a strong Japanese community in Seattle, where my husband and I have settled.

I was born in the countryside of Japan, so I would run around a lot and study little. I remember playing all the time with no restrictions. When the war started, I was about 10 years old. We were in the countryside, and we had a ranch, so we didn’t have a problem feeding ourselves. Maybe a bit with meat and fish, but we produced our own rice and vegetables, so we were never hungry. I don’t remember seeing any soldiers, and we didn’t get bombed. Maybe 20 miles from my house was a city, Fukuoka, and one time I remember seeing the bombs from afar. To me it looked like fireworks. That’s what I remember.

I met my husband, Michael Forrester, through a mutual friend. He was in the U.S. Air Force. One night, he was visiting his friend, and by chance, I was visiting his friend’s wife, so that’s how we met. At first, I thought he was a snob like all the other American soldiers who came to Japan. You know how soldiers come in and take over our country and we couldn’t say anything. He thought he was a big shot, so I thought I would show him my Japanese spirit! That changed when he showed how persistent he was. He kept coming back, and the Japanese guys, they never did that. And he had plans for his life. I liked that about him. The way he looked to the future of his life — that’s what I fell in love with. He wanted to become a pilot, and I wanted to help.

When my father died, my brother quit school to become the head of the family. At that time in Japan, women weren’t supposed to be more educated than the head of the family, so my mother wouldn’t let me go to college. My teacher even tried to talk to my mother to convince her, but she still said no. So with Mike, and his plans, I said, “This is someone I can help go to college.” And now we’ve been married 62 years.

Initially, my family were not happy about me wanting to marry an American. Some of my family had died in the war, so my uncle was strictly against Americans and those who associated with them. He disowned me. But my other family members, they knew how stubborn I was, and they knew that once I had made up my mind, that was it. Their only worry was how would they help me if I was so far away.

We married in 1958. There were a couple of things in our way. When we filed for permission with the U.S. Air Force to marry, they sent Mike back to the United States! So it took time — close to two years. When he managed to come back to Japan, he was stationed. We actually had three weddings. The first was in a Shinto temple, which the Japanese recognized as an official marriage, but the Americans did not. It made it easier for me to move with Mike to his new station on Okinoerabujima. Then our second wedding was December 23, 1958, and our chaplain one was on February 17, 1959.

Our first wedding was a Japanese wedding, which meant you have to take your shoes off, and that’s when I saw that Mike had holes in his socks! I remember looking at his feet and saying, “What is this?”. The U.S. Air Force found out about our Shinto wedding, and they didn’t like it. They almost court-martialed Mike for it. But his mother wrote to President Eisenhower, who stopped it.

We moved ahead with our plans to move to the United States. I had gotten my visa and passport, and Mike was due to finish his service in the air force. One night, the MP and Japanese police knocked on my door, and I thought, “What now? Is Mike going to jail again?” But this time, it was the sad news that Mike’s father had died. So Mike had to leave straight away. It actually turned out that even though Mike left before me, I arrived in America two days before him. The American Red Cross helped me with getting the right tickets and everything. When I arrived in New York, I slept in the same bed as his mother, because there was no space for me.

Because it all happened so fast, I didn’t have a chance to feel sad about leaving Japan. It was more about how I could get there safely. And I was young, so my mind was made up. I’d heard great things about America. It was the land of opportunity. I know a lot of Japanese people who miss Japanese food, but I don’t miss much about Japan. I liked hamburgers, and steak, and Mike’s mom’s specialty was spaghetti. That was good!

I learned how to read and write English a little in Japan, but the pronunciation was difficult for me. Some words were easy to confuse, like “yard” and “garden.” When I arrived in America, I had three younger brothers-in-law. I had to learn how to speak English for my own survival. I was always listening in the beginning, and I found that was the best teacher.

We moved around America a lot. When I first came, I felt so free and energetic. I love it here. Nowadays, I think people forget to show kindness and manners, however, which saddens me.

I have been back to Japan many times since. It has changed a lot. Especially my village. We used to run through all the houses playing hide and seek without permission. But now all the houses have fences, and gates, so it must be different being a child there. And there are lots of multistory buildings. Everything is being built up.

I think it’s not enough for a young person to marry someone from another culture or another country simply for the sake of living in another country. There needs to be some sort of goal they share. They should think twice, because love will get you into trouble. On some level, I just don’t resonate with that sort of easy thinking of an easy marriage.

Babbel has now launched a discount for those involved with the military and veterans, as well as their relatives, as a thank you for their service. It is available here: https://welcome.babbel.com/en/military-discount/